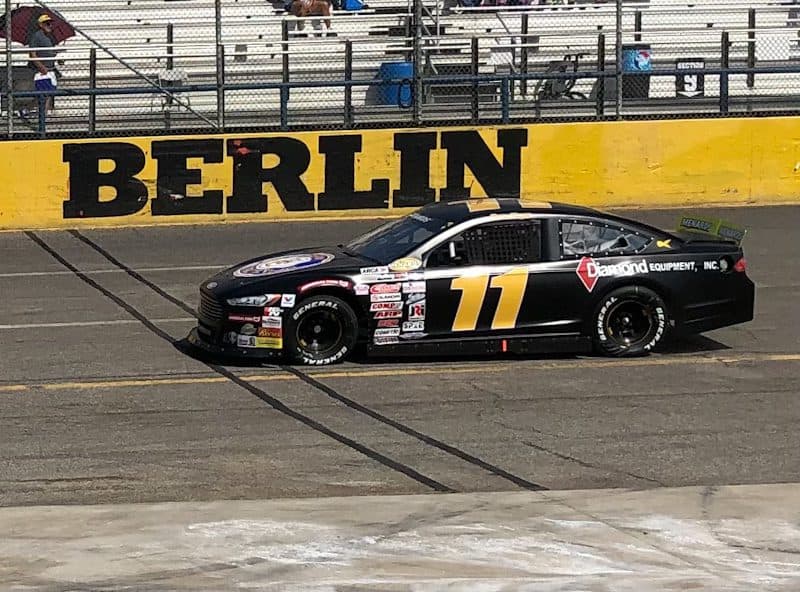 For the 22nd time, the ARCA Menards Series travels to Marne, Michigan, for the Zinsser SmartCoat 200 at Berlin Raceway. The seventh race of this season features a season-low 17 drivers, but the level of competition has not diminished.

Daniel Dye walloped the ARCA field there last year, winning the pole and leading 198 of the 200 laps en route to victory in only his second-career start.

“Berlin is such a unique place to race at, because you honestly never stop turning,” Dye said in a team release. “We were able to be really good there last season with our GMS Chevy, and I have no reason to think we won’t be just as fast this weekend. Grand Rapids is a cool area, so I’m looking forward to getting back up there.”

If Dye wins at Berlin, he will join a short list of successful ARCA drivers there.

@danieldye43 would be only the 6th different driver to have back-to-back wins in ARCA at Berlin Raceway, potentially joining the likes of Bob James, Tim Steele, Frank Kimmel, Brian Keselowski, and Grant Enfinger​. React with a ❤️ if you think he can do it!☑️

According to Greg Van Alst, who has experience in late model competition at Berlin, Dye is one of two ARCA heavy hitters at Berlin. Sammy Smith is the other one.

Smith tied his main ARCA series career-best finish with a second-place finish in the most recent ARCA race at Iowa Speedway.

Smith also has experience in late model competition at Berlin. If Smith wins the ARCA race at Berlin, he will become the fourth straight first-time winner at Berlin, following Dalton Sargeant, Joe Graf Jr. and Dye.

Van Alst has not won at Berlin yet. He knows his experience at this track will be advantageous.

“It’s fun going to a track I’ve been on,” Van Alst told Frontstretch. “It’s been a couple of years since I’ve been there, but I only have a couple of races under my belt there. Listen, the first time I went there I was absolutely terrible because it’s such a unique place. So, I feel like we’ll have an advantage over knowing where the groove is and how you’re supposed to run the racetrack. I feel like we should be good.

“I think we can run top five there. It’s a tough series so it’s not easy to get to the top five. I think we’re capable of doing that.”

Berlin is unique because it does not have a wall on the backstretch.

Van Alst will be driving the same racecar he wheeled to an eighth-place finish at Iowa. He will then drive it at the next ARCA race at Elko Speedway.

“You drive a little different. Going for a win is different, but if you cannot gain anything, don’t push it. I did that at Iowa, got into the wall a little bit, but didn’t hurt anything other than the wrap,” Van Alst said with a laugh.

Embarking on his first full-time ARCA season, Van Alst understands his independent team has a tough task, but his Van Alst Motorsports team is ready for the challenge.

“I feel like we’re a little bit behind but we’re not out,” Van Alst said about the team’s preparation. “Berlin, then Elko, then three different cars for the next three races. Our road course car isn’t where I’d like it to be at this point, but once we get through Elko, we’ll start rotating better.”

A strong finish at Berlin will certainly boost morale as well as continue Van Alst’s climb up the championship standings. He is in sixth place, 54 points behind leader Nick Sanchez, though only nine behind fourth-place Toni Breidinger.

“If you look at the points, look at Phoenix,” Van Alst said. “We got cleaned out by Amber Balcaen 11 laps in. That’s the race that got us behind. Some of those guys haven’t had any bad luck yet. I don’t wish bad luck on anybody. But if they have a couple of bad races, it could put us right back in there. I think we can make the top four for sure if we keep going in our current direction. If they don’t have some bad races, I don’t know that we’ll be that much better than them to catch them. We can be better than them at certain tracks, but it’ll be by a couple of spots or one spot. With the way the points are, it’ll be a tough hill to climb.”

Balcaen also enters Berlin with three straight top 10s. The Canadian will make her first start at Berlin, but her team owner Mark Rette is optimistic for her.

“Berlin Raceway is a tight short track but I think it will fall into her wheelhouse and I think she will surprise a lot of people on Saturday night,” Rette said in a team release.

“I’m continuing to prepare for these new race tracks the same way I have pretty much all year,” Balcaen added. “I’ve heard a lot about Berlin Raceway – especially with it being a track without a backstretch wall. That will definitely be a new experience for me, but I’m thrilled to get to another short track this weekend.”

Balcaen’s goal is a top-five finish, which would be a career-best, but she steadily has raised her goal this season to be her first ARCA win.

“We want to go out there and have a shot to win and finish inside the top five, top 10 every week, but the ARCA Menards Series is a very tough series right now,” Balcaen said. “There are some very good teams with talented drivers all fighting for their time in the spotlight, myself included. We keep checking items off our checklist for the 2022 ARCA season and hopefully a top-five finish is the next thing we do on Saturday night.”

Where better to earn her first victory than at Berlin? Of the 17 drivers competing in this 200-lap race, only four have top 10s at Berlin in ARCA competition – Dye, Sanchez, Taylor Gray, and Jesse Love.

The Zinsser SmartCoat 200 will have competition cautions at laps 75 and 125. It will begin on June 18 at 8 p.m. ET with TV coverage provided by MAVTV Motorsports Network and available on FloRacing.