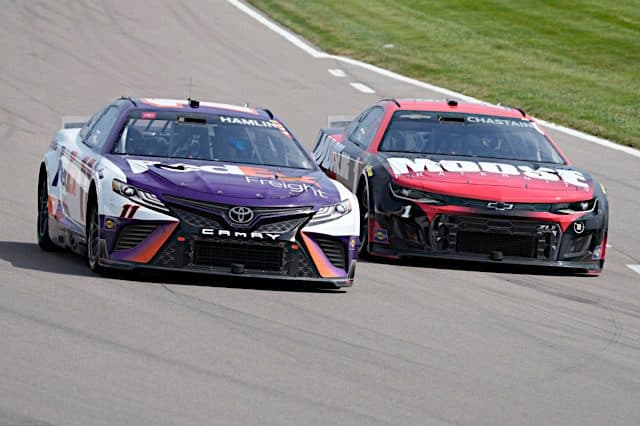 When pondering adding more races at new-to-NASCAR Cup Series venues or modifying current races with a new surface or twist of some sort, NASCAR needs to ask itself one important question first: Do you want Joey Logano to win the race?

That’s said partially in jest, but not completely. The elder statesman (sorry, but it’s true) of the Team Penske camp is NASCAR’s current king of adaptability, proving it again Sunday (June 5) by taking the checkered flag in the Enjoy Illinois 300 at World Wide Technology Raceway at Gateway.

He was hardly dominant, as three drivers led more than his 22 laps in front. But as he often is when the Cup Series tries something new, Logano was in position to win when it mattered and pounced when others experienced misfortune.

The victory means that Logano has won three of the last six new races in the Cup Series; along with his Gateway triumph, he also took first place in the season-opening exhibition race at the Los Angeles Coliseum, as well as the inaugural Bristol Motor Speedway dirt track race last year.

Does his skill at navigating new tracks and formats mean anything in terms of his championship aspirations? For 2022, probably not, as there are no first-of-their-kind events left on this year’s schedule.

For next year and beyond, though, it might — assuming NASCAR continues to tinker with its annual Cup slate. Some drivers are just better at adapting to change than others. This season brought the new car and a new race to the party, and Logano happens to be tied for the series lead with two victories so far. Continue to change things up and he’ll probably just thank you for doing it.

Nothing can stop the Ross Chastain bandwagon, right? Long a favorite of the “this guy would be amazing if he was given a chance in better equipment” crowd, the Trackhouse Racing Team driver has spent most of 2022 proving them right, claiming his first two Cup victories and generally running toward the front more often than almost anyone else.

But many more days like he had this past weekend are going to make the attitude toward him in the garage more Everybody Hates Chris than Everybody Loves Raymond. Chastain was involved in incidents with both Denny Hamlin and Chase Elliott, and appeared to be at fault in both cases.

Hamlin, naturally, was vocal about his displeasure, saying, “we all have learned the hard way” when it comes to Chastain’s aggressiveness.

For his part, Chastain was remorseful, at least in his post-race comments.

See also
Up to Speed: Will Gateway Apologies Save Ross Chastain from Payback?

“I owe half the field an apology,” he said, according to NASCAR.com. “And words aren’t going to fix it, so I’ll have to pay for it on the track and almost did today. And I deserve everything that they do. I just can’t believe that I continue to make the same mistakes and overdrive the corners and drive into guys.

“I had time under caution to get reset, and we go green and I drive into somebody. That’s terrible.”

What would truly be terrible is if these kinds of days ruin what to this point has been one of the top stories of the season. Chastain knows he’s fast enough to challenge for wins now on a regular basis, but there are other intricacies a driver needs to master to be a true title contender. The rest of 2022 will be an interesting test case to see if he can figure them out before everyone turns on him.

3. Does Gateway success mean other venues can hope for more first-time Cup races?

NASCAR can take a victory lap over holding a Cup race at Gateway for the first time. Fans really liked the race. The local media was also impressed. Drivers didn’t do much griping afterward, though perhaps they were too busy complaining about Chastain.

So does that mean other tracks hoping for a debut race of their own next year should be optimistic? Well, it certainly doesn’t hurt, but circumstances still need to be right for NASCAR to make the move for a Joey Logano Invitational somewhere — and by that, I mean there has to be a consensus that the sport would be better off with a track with two dates losing one, as Pocono Raceway did in 2022.

(Note: The two tracks closest to me are Dover Motor Speedway and Pocono, and both have lost one race weekend in recent seasons. I’m trying not to take it personally, but it’s hard.)

I’m sure you could fill up the comments section with ideas for tracks that could stand to only have one Cup race a year to allow your favorite venue not currently on the schedule to have one. That doesn’t mean NASCAR is going to do it, but successes like the one we just saw certainly might make it that much more tempting.

4. Definitely practice your hand signals with your brother if you’re both planning on becoming racers someday

Though neither of them are likely laughing about it now, one of the low key amusing subplots from the end of last weekend’s Cup race was that the Busch brothers messed up their communication on the final restart, which would have given Kyle Busch a better shot at beating Logano for the win. Kyle was going to give Kurt Busch a hand signal on when it was time to go and give him a push, but he apparently decided against it because he thought Logano might be looking for exactly that.

See also
The Big 6: Questions Answered After the 2022 Enjoy Illinois 300 at Gateway

OK, but you two are brothers! You mean to tell me there’s no secret hand signal that definitely doesn’t shout out to the rest of the world, “it’s go time, give me a push!” that the two of you devised over the years?

Aspiring race families, let this be a lesson to you. There’s no excuse for not having some way to communicate that only you understand. Your trip to victory lane may one day depend on it.

While the Cup Series was in the St. Louis area, the NASCAR Xfinity Series was at a new venue as well, making its debut at Portland International Raceway. Despite poor weather, fans definitely showed up and supported the event.

So could the Cup Series follow? Jeff Gluck of The Athletic isn’t so sure, suggesting that it would “take a major investment to get the facility Cup-ready.”

More than that, though, is that the Cup Series is likely at peak road course right now, with six of them on the 2022 schedule.

Does there need to be another one? The guess is probably not, so unless and until that changes, Portland is likely going to have to wait, impressive fan turnout or not.

How much different is it for Logano to make no attempt to pass people cleanly. But to just ram them to make the pass, & to be totally unapologetic about it, with no apparent repercussions?
Than it is for Chastaine to let his aggression cross the line? Yes he needs to dial it back a notch, but he also needs to get over it. Hanlin made his displeasure known, now it’s time for him to do the same.
If he chooses to pull a Harvick, & wreck Chastaine in the next race, then it might be time for him to start looking over his shoulder. If this continues it could hurt (maybe literally) both of them.

If you are talking about the byron incident it was obvious to most anyone watching that joey was retaliating for byron squeezing logano into the wall on the final restart. So byron had one coming and he knew he wouldnt get by with that so its over now and i think both of them have moved on. If joey was such a dirty driver like some of you think he is he would have wrecked kyle busch at gateway but they raced each other clean. They may not like each other but they do show each other respect and thats what its all about. Race people like they race you.

As I’ve said before, I hope NASCAR continues to switch up the tracks. It would be perfectly fine to go to one track one year and a different track the next year, and alternate.