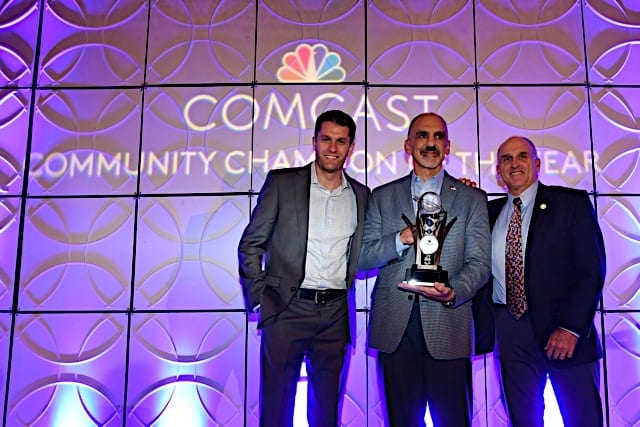 For the eighth consecutive year, Comcast will hand out its prestigious Comcast Community Champion of the Year award in the fall.

Past champions include the likes of NASCAR Cup Series stars Joey Logano and Bubba Wallace.

The annual award serves to recognize philanthropic efforts of individuals within the NASCAR community. New for the 2022 season, Comcast has opened the eligibility for anyone in the NASCAR industry with a 2022 annual credential or NASCAR full season license.

“Just like with anything, we don’t want to grow stale,” Matt Lederer, Comcast’s VP of Brand Partnerships, said of enlarging the eligibility. “We’ve learned the NASCAR community is wide, vast and has a lot of people in the ecosystem. We wanted to expand it, and we thought the hard card eligibility does that. It brings in a larger pool of people and gives us more storytelling opportunities.”

With nominations opening up last month, Comcast will select three finalists and share their stories publicly. In the fall, a committee of NASCAR and Comcast executives will get together and determine which story will be named the Comcast Community Champion of the Year. Per usual, the champion will receive $60,000 while the other two finalists receive $30,000 apiece toward their charities.

Over the years, Comcast has remained close with previous finalists. Lederer was walking around the garage at Dover Motor Speedway when Joey Gase, the inaugural Comcast Community Champion in 2015, stopped by for a conversation.

“We stay in touch and are constantly supporting their stories,” Lederer added. “Jamie Little was a finalist and her video — despite not being the champion — was the most organic viewed video we’ve ever had.

“That’s just an area that shows how we can support. Because of our presence on social, because of the scale we have in the sport, we can tell these stories whether they are the champion or one of our finalists.”

Previous finalists and champions are still reaping the benefit of the award. Some have always wanted to give back, while others weren’t sure they’d ever be in that position. Nonetheless, all are appreciative of Comcast’s generosity in supporting unique stories.

“I think just being recognized as that is something that I’m definitely proud of and appreciate to this day,” Wallace, 2020 winner with his Live To Be Different Foundation, said. “That’s not one of the accolades I set out for in my career, so when you put in the hard work and effort to make a change in the sport and people recognize it, it’s special and humbling.

“It motivates me to keep pushing for more inside of our sport and continuing to make change. We’re seeing it step-by-step, and we’ll have some setbacks that we have to figure out how to overcome, but that’s part of it.”

Meanwhile, Mike Tatoian, 2019 champion is the chairman of the advisory council for USO Delaware. Since beginning his tenure at Dover Motor Speedway in 2007 — he was promoted to president of Dover in 2015 — Tatoian has been a staple of Delaware and Mid-Atlantic charitable communities.

Just months after being named the 2019 Comcast Community of the Year champion, COVID-19 struck the United States. Despite knowing what USO Delaware was going to gear its donation toward, it had to wait.

“We have a USO center on Dover Air Force Base that was in need of a physical changes to the center itself,” Tatoian said. “100% of that $60,000 was invested in a small renovation to the USO center. It was a direct impact on our service members and their families.

“We were literally able to receive the money and deploy it and steward that money right toward the renovation at the exact time we needed that to happen. If anyone would happen to visit it, you can see the result of that donation with your eyes.”

Comcast’s donation to the USO Delaware will be “long lasting” and something that will help its service members year after year.

This weekend, the Cup Series makes its first visit to World Wide Technology Raceway, home to the reigning Comcast Community Champion Curtis Francois, track president at WWTR. Francois’ Raceway Gives Foundation lifts up individuals and military families in the St. Louis area who are seeking to fulfill their potential, no matter their situation.

“The Comcast award has enabled us to provide seed money to an important community beautification project at a prominent location in East St. Louis, Illinois,” Francois said. “In collaboration with I Am EStL The Foundation, the project includes cleanup and the installation of a custom 1,000-foot art mural. This beautification effort is intended to boost local pride, which I believe is essential within successful communities.”

Since the inception of the Comcast Community Champion of the Year program, Comcast has donated $840,000 to 21 nonprofit organizations, furthering the impact of the philanthropic efforts of all finalists and champions.

Nominations for this year’s Comcast Community of the Year Champion are open until August.