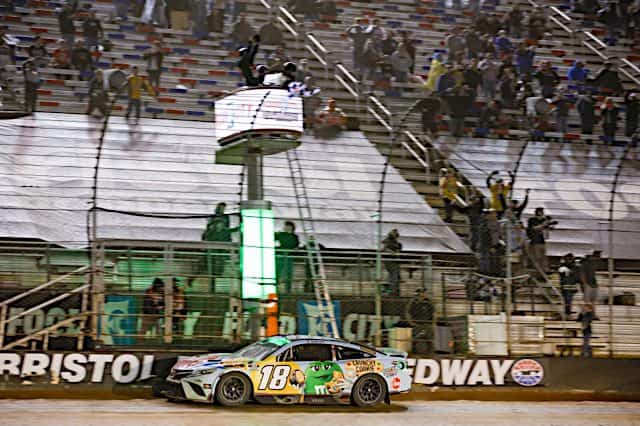 Some days you’re good and some days you’re lucky. Kyle Busch got lucky at Bristol Motor Speedway Sunday night, winning the Food City Dirt Race as Chase Briscoe’s failed slide job in the final corner took out leader Tyler Reddick. Reddick led the most laps and even after being spun by Briscoe, almost eked out the win but didn’t have the momentum to hold off Busch in the final yards. Busch squeezed past to what was, judging from the crowd, an unpopular victory.

As for Reddick, he continues to show improvement and took the blame for the finish, saying he shouldn’t have let Briscoe get close enough to make the move. Reddick was good on Sunday… really good. One of these days, he’s going to get lucky, too.

And don’t forget Michael McDowell. He didn’t have enough to make a run for the win at Bristol, but he posted a solid ninth-place finish in his underfunded ride. McDowell started 17th but held point in the top 10 for most of the second half to score his second top 10 of 2022.

Does the NASCAR Cup Series belong on dirt? That was part of the talk on social media after issues popped up almost immediately with mud clogging grilles caused an early caution. Luckily for all involved, that more or less resolved after the track wore in, but the question remains.

The short answer is yes because it’s a skill that the best stock car drivers out there should have. Just not at Bristol.

The work that goes into making Bristol into a dirt track is commendable. But it’s not a dedicated dirt track, and it shows. That’s where NASCAR needs to be if it wants dirt racing to be a part of the sport’s future. Knoxville Raceway and Eldora Speedway come to mind as tracks that NASCAR should look into for the Cup Series.

Dirt was part of NASCAR since the start and it should be part of it now. Just not at the expense of a good race.

Polesitter Cole Custer lost the lead almost as soon as the green flag dropped, and things went from bad to worse when he had to pit after about a dozen laps to get the dirt removed from the grille of the No. 41. That unscheduled stop came just a couple of laps before NASCAR threw a caution for teams to do just that.

Custer obviously wasn’t happy with NASCAR’s decision. He did get one of his laps back as NASCAR gave him a free pass along with Aric Almirola who had also pitted before the caution for his grille. Custer did eventually get back onto the lead lap and worked his way back through the field to finish a very respectable 13th.

Point leader Chase Elliott crept into the top five by the end of stage two but was among the group who pitted after the stage and restarted midpack, where a tangle with Cody Ware slowed his forward momentum. Elliott worked his way forward in the second half, gaining a handful of spots, but not cracking the top five again, finishing eighth.

Last week’s winner, William Byron, isn’t an experienced dirt racer, but he gained some good experience Sunday. He held his own midpack for much of the night, gaining track position in the stage three shuffle before slipping back to finish 18th. It’s a small hiccup in what’s been Byron’s breakout season so far.

Defending race winner Joey Logano didn’t have the best car in the field, but he used the track position he gained after stage two to hang with the leaders and even challenge a time or two. Logano’s not an experienced dirt racer, but he did an admirable job of hanging on as long as he could, and he hung on until the end, finishing third, bringing his dirt average to second place. Not bad for an asphalt guy.

For NASCAR, it came at the end of stage two, when the field was frozen but the rains came. There should not have been any confusion about who was running where, because the rules were laid out, but the weather delay and subsequent pit strategy put a wrench in things. Drivers were confused about where they’d finish if it didn’t resume versus where they’d be running if it did.

In reality, the running order was set by the rules in place and there shouldn’t have been the confusion there was. But it was a lot to take in for new or casual viewers, who probably got left with the impression that if the drivers didn’t know, NASCAR didn’t either, and that’s not especially easy to overcome. A Sunday night race is already generally unpopular with fans who have to work Monday morning, and a rain delay and the confusion it brought didn’t help.

The Cup Series leaves the short tracks behind for big, bad Talladega Superspeedway. It’s an anyone-can-win track because it equalizes the cars, but superspeedway racing is certainly a skill in its own right.

It takes all that skill and quite a bit of luck to win at Talladega. Even running up front is no guarantee that a driver can avoid trouble when it happens around him.

One added question surrounds the lack of available body panels for teams. Will more teams take a conservative approach, choosing not to make moves in hopes of keeping their cars in one piece? We’ve already seen the effects of the shortage at Martinsville Speedway, but will it change Talladega as we know it, at least this time around?

How… big of an impact does the Bristol dirt race have on the season?

The impact on the outcome of the season is negligible. There can certainly be playoff implications if a driver who would not be likely to otherwise make the cut wins their way in, it can be argued they’re keeping a more legitimate contender out. But that’s a small risk and it’s hard to say it’s a real issue since someone missing the playoffs on points isn’t really championship caliber.

What it does do is keep NASCAR’s history a part of its present, and that’s to be applauded. It might be at the wrong track, and it doesn’t have a major impact on the title, but it tests the skill of the drivers in a unique and important way.

Hopefully NASCAR will not have a race on future Easter Sundays. I know a lot of the NASCAR racing community view it as a truly Holy Day/Weekend to spend time with their family and faith. They were not happy about it. Don’t blame them. What a foolish waste of time and resources better spend else where, IE faith, family. What genius thought this one up? I bet I know, the one still basking in his “positive” press regarding LA. Ben France perhaps? Just guessing. Not cool.

If Nascar is going to use the attendance as their guide, I’d say dirt at Bristol is NOT the answer.

i don’t think there was much on tv sunday night, so they might do well in ratings. i turned it off when the rains came and they were still out on the track trying to drive in the muck.

It beat out the normal spring Bristol races for 2018 and 2019 by a mile attendance wise.

I totally agree that a dirt race should be somewhere other than Bristol, but I applaud NASCAR for taking this risk. The dirt events have been fun to watch, for me anyway.

Sunday night is a bad time to race if it’s not before a holiday, and NASCAR shouldn’t be holding events on Easter or Mother’s Day. Just saying.

When it comes to dirt racing, when Kyle Larson talks. NASCAR should listen. There are lots of things that need improvement, but one dirt race is a good change of pace. And this one for all it’s faults was pretty entertaining.
But yes, it needs to be on a regular dirt track. Any number of tracks could be leased & temporary seating used for app. the cost of covering Bristol.

To call what happened on the last lap “a slide job gone wrong,” isn’t accurate. It was a mugging.

I wonder if Kyle Busch has changed his mind about “backing into a race win?”

First. Racing on Easter should not happen. There are still things that are more important than car races – if you don’t get that, you have a problem.

Second True, dirt racing is in NASCAR’s history, but do it on a dirt track instead of throwing clay on a good hard surface track. Knoxville and Eldora come to mind…

It’s a sad situation when a TV network dictates to the sport when to hold a race. Fox leaned on NASCAR because the ratings were sagging, and they figured this would help raise the TV ratings for them (money is still the king, I guess).

And, as an “added attraction”, The Shrub can now join the group that he threw shade on about 6 weeks ago; Those who “back into a win.” Chase Elliot, here’s another opportunity for a sell-out T-shirt…

I think they should make Daytona and Talladega dirt races.

I’ve always felt that the best place to be if two drivers are battling for the win is third. If they take each other out guess who wins? Kind of like Richard Petty at the 1979 Daytona 500.

Question 7: Did anyone understand the rules for pitting? NA$CAR has gotten more creative with the caution laps again on Saturday and Sunday. The results page shows laps 76-76 and 151-151 for the segment conclusions. The event was red flagged and the cars stopped on the track while cars were in the pits and didn’t start counting again until the green flag. As I understand it, the cars could only get gas and tires during those two cautions, which was why some teams were worried about running out of S’noco gasl.I sure am glad NA$CAR is simplifying their rules.

Would someone try to convince me that Brian still doesn’t have his foot prints all over NA$CAR suits’ brilliant decisions since he “left”?

NASCAR Press Conference December 23, 2027: A determination has been reached that our efforts to cajole the dirt racing community into falling on our exhaustive social justice sword has failed. We now turn our future interest towards the power boat racing consort as we expand in that direction.