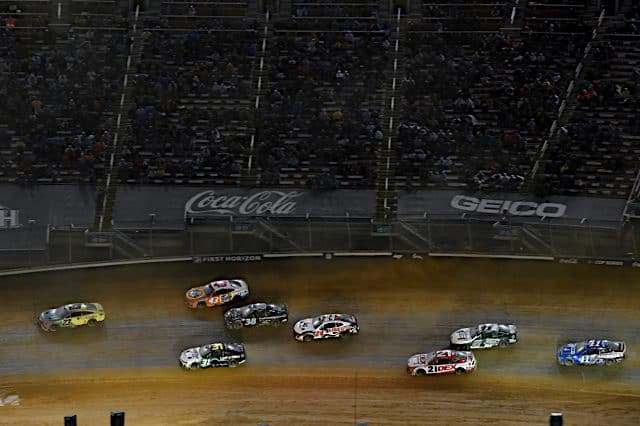 1. Should NASCAR race on Easter again?

I don’t profess to be a theologian. Despite having friends who are seminary graduates, the extent of my theology lies somewhere in the quote from Father Cavanaugh in Rudy:

“Son, in thirty-five years of religious study, I’ve come up with only two hard, incontrovertible facts; there is a God, and, I’m not Him.”

I don’t know whether or not God is pleased or not that NASCAR raced on Easter Sunday. But given overall enthusiasm leading up to the race, it was rather evident that the gamble of enticing fans to spend Easter Sunday at Bristol went over about as well as not using Duke’s Mayo for your Easter Sunday deviled eggs.

Sure, weather played a role in attendance, and you can make all the jokes you want about the rain delaying parts of Sunday being a sign from God to never again race on Easter Sunday. But the other fact is this: as much as NASCAR wants to court a diverse audience of new fans, a good part of them are still the traditional fans whose faith is a big part of their lives. Sure, if you’re new to the sport a pre-race invocation may not mean a lot to you, but just scan social media when an invocation for a truck series race is not televised.

A core part of NASCAR’s fan base values their personal faith and beliefs, and that includes spending time having Easter dinner with the family and hunting Easter eggs. NASCAR appears to have an unfortunate desire to forget that.

2. Did Briscoe and Reddick raise the bar for post-race reactions?

In a world of post-race snipes from Kyle Busch and Ty Gibbs, Chase Briscoe was the opposite on Sunday night when he admitted fault for costing Tyler Reddick his first Cup win. Of course, one video circulating on the internet indicates that at least one or two pit crew members are not as remorseful to have lost out on a chance at a win.

Old school fans, I’m sure, are already thinking, “you’d never see Cale or Bobby say they’re sorry for wrecking someone for a win … ”

But in a bubble where every single driver action is observed, and let’s face it, emulated by drivers on short tracks, Briscoe and even Reddick probably did more good than harm for their careers.

There’s an old poem about called “Little Eyes Upon You” about how children are always looking up to those that are older.

Simply put, Reddick and Briscoe gave us all a breath of fresh air on Sunday night.

With supply chain problems already straining teams, a week of having cars beat up on a dirt track leads us to … Talladega: a sheet metal auction waiting to happen.

Would NASCAR have built in an extra off week and not raced on Easter had it known a year ago what might happen with the difficulty of parts getting to teams? Maybe. Or maybe not.

Between the strain of having to reset cars and hoping that you have enough pieces available, it would not be a shock to see more teams ride around single-file at Talladega for no other reason than to have enough cars to get to the next race. Think about it: Between two superspeedway races and Bristol, this year has already been a strain on the effort to get to and from the track intact.

Talladega usually gives us one of the more exciting races, but a desire to cram as many races as possible into a schedule could end up not providing that usual white-knuckled excitement.

4. Should SMI slow the creativity?

SMI and Marcus Smith, along with other leaders such as Steve Swift, should be greatly commended for their successes in thinking outside the box with the  Charlotte ROVAL and the reconfiguration at Atlanta Motor Speedway. But as the saying goes, “the main thing is to keep the main thing the main thing.”

If there’s anything that the start of Sunday’s race and other factors showed us, it’s that a concrete racing surface is meant for racing on … hear me out … concrete.

SMI deserves credit for trying something different, but it’s high time that racing on a surface a track was not designed for originally should take a hike. You want to race on dirt? Find an actual dirt track like Knoxville that knows dirt racing. NASCAR likely had a lot of new viewers watching Sunday due to Easter, which I am sure was the designed gamble. But the start of the race and learning curve put before teams was not exactly Class A material.

And that’s not even discussing nobody understanding how the field was frozen during the TV broadcast later in the race.

There are times to be creative. That era has sailed for the spring Bristol race.

Maybe it’s the fact that absence makes the heart grow fonder. Perhaps it’s the chemistry he had with Clint Bowyer. But much like the 2020 All-Star Race, what appeared to be a rejuvenated Darrell Waltrip in NASCAR On FOX broadcast booth made for a better show.

DW was able to sit back and observe more — he didn’t have the task of carrying the broadcast on his own.

Another element was that Waltrip was not one of the usual announcers. One aspect that makes, in my mind, the Xfinity races more interesting broadcast-wise is that the rotating driver/announcer lineup does not present the same voices each week and gives you something different.

listening to dw, to me, he sounded like a old man. he can’t relate to this car. he just seemed lost. then when i saw michael there. i cringed. i know michael is still with fox, but the waltrip bros together again. augh! besides, michael should put some socks on to hide his ankles.

i didn’t see the post race stuff. i turned it off during rain delay. i did think it was amusing when they were trying to drive in the rain on mud.

no racing on easter. they started racing on mother’s day a few years ago. easter, they need that break. crews need time to recharge after being on the road all these consecutive weeks.

dega will be interesting. mother nature should not be an issue this time. 80 degrees both days. of course we’ll have the earnhardt issue at dega all weekend. jeffrey in the 3 for xfinity and larry mac on the pit box. talk about being away from something for a while, over 20 yrs since larry mac was crew chiefing! then of course jr on sunday. watch out for boyer and the 28 story line. they’ll get lots of mileage out of that this weekennd too.

Two points I can’t agree with. #1, I absolutely don’t agree with the way that Atlanta, & the racing was bastardized. #2, And this is just for me, but any coverage with one Waltrip has one too many. With two, it’s way too hammy.

If they want to have a race on Easter weekend do it on Saturday night. Sunday night races suck for anyone that has to work on Monday. I’m retired and I don’t like them.

More DW…. Hell NO! I purposely missed the beginning of the race just so I wouldn’t have to hear the dreaded BBB. Perhaps in another decade (without any BBBs) I will look back with nostalgic eyes and have a soft spot for the memory. Much like a song you hated when it was popular but 20 years later bring back memories of the time when you hear it.

I still work on Mondays, and I can tell you my biggest beef with NASCAR right now is the start times. I don’t like eating dinner during the race. And I missed the first stage of the Bristol race because I was having dinner with my family. Although, I did miss the infamous DW intro to the race so I’ll take the good with the bad.

Kurt Smith – don’t you know you’re not supposed to eat with your family (jk!)

i miss the noon or 1 pm start times. as i say football starts that time as well. most of the time i get busy doing something and then remember at 2 or 3 the race is starting.

Easter is just another day to me, but racing on Sunday night is a bad idea. Most of the fans have to get up for work the next day and the race finished late on the East coast.

I’m like many others and we have had enough of the Waltrip Bros.

The Waltrips wore out their welcome YEARS ago.Mikey must be blackmailing somebody to stay on the telecasts.

DW was somewhat lost but he admitted it was so. A one off appearance was okay by me. As to Michael Waltrip, I’ve never been shy in criticizing his supposedly ‘zany’ act, but Sunday he was quite subdued and not at all annoying. Having watched him over the years in interviews discussing his personal life, he’s said something along the lines that the zany, good time Michael persona is an act because that’s what people expect of him. But when he’s not inhabiting a made-for-TV persona he’s quite a thoughtful person with a long, long history in and knowledge of the sport. At this point he really should drop the clown act and just be real, which is far more palatable.