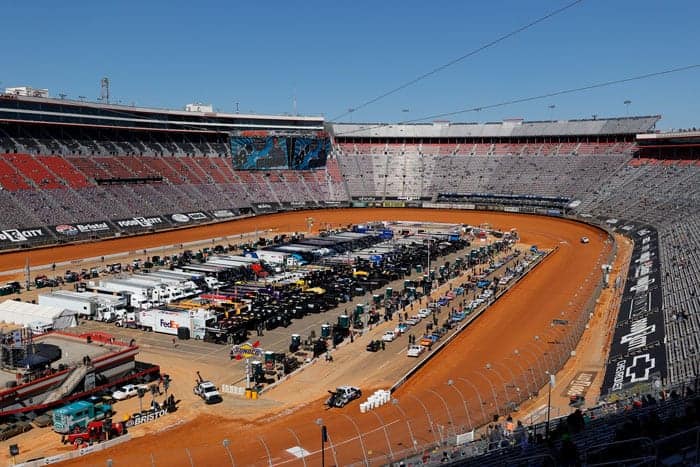 This weekend, the NASCAR Cup and Camping World Truck series will race on Bristol Motor Speedway’s dirt surface for the second time.

Speedway Motorsports has taken its greatest and most beautiful facility and dumped truckload after truckload of mud onto it. It’d be like taking the iconic Lambeau Field and changing the field color to blue (of course, Bristol was already tampered with when it went from asphalt to concrete, but that’s a whole other topic).

Putting dirt on Bristol essentially happened because of two reasons: low attendance for the spring event and because FOX wanted it.

Something needed to change to try to boost attendance, right? Actually, no.

Bristol holds over 160,000 people, so it could literally have double the attendance of last year’s Nashville Superspeedway race and it would still look half empty. Meanwhile, Texas Motor Speedway has had races where I wondered if there were more people racing on the track than there were in the grandstands, and yet not a thing is being done to change that abomination of a racing surface.

Attendance doesn’t matter anymore. Just ask Pocono Raceway, which lost a race despite packing the place for the last year’s doubleheader. Why’d it lose a date? Because TV ratings weren’t good for the Saturday race.

Ratings are what matter now. And FOX paid the big bucks to NASCAR, so it gets to call the shots. Which is completely fair, but it’s just hard to go along with the vision of a company that thinks it’s a great idea to put someone in a watermelon seed costume to convince viewers to stick around and watch the race.

I’m all for trying new ideas, but NASCAR tried dirt on Bristol last year and it was pretty much a disaster. Rain plagued the weekend, as it has and will continue to do every single time you have an event in Bristol, Tenn., in April. And when the track wasn’t too wet, it was too dry. It’s the kind of thing that happens when you create a temporary dirt track at which crews can’t get consistent reps in prepping it.

So should the Bristol dirt experiment come to an end after this year? My opinion on it isn’t worth two cents, but there are three NASCAR icons who have come out against the Cup Series being on dirt at all.

Defending Cup champion Kyle Larson, one of the most highly regarded dirt racers in the country, voiced his displeasure at Cup racing on dirt on SiriusXM NASCAR Radio’s “Dialed In.” His issue with it stems from NASCAR’s refusal to remove windshields for the event, as one of the biggest issues last year was the windshields being quickly being covered with mud as soon as the green flag dropped.

NASCAR Hall of Famer Richard Petty, who was the most recent driver to win at dirt at the Cup level prior to Joey Logano winning at Bristol last year, was the first significant figure to speak out against NASCAR returning to dirt. The King was against the idea from day one.

Thirty of Petty’s 200 Cup wins came on dirt tracks, and his father, Lee, has the most dirt wins in Cup history with 42. So the seven-time champion is no stranger to dirt racing.

Two-time Cup champion Kyle Busch, who has the most wins among active drivers on Bristol’s concrete surface with eight, echoed Petty’s comments this past week.

There’s 10 combined championships between Larson, Petty and Busch. When they speak, NASCAR, FOX, Speedway Motorsports and fans alike should listen.

Recently inducted Hall of Famer Dale Earnhardt Jr. is more open-minded to NASCAR racing on dirt but doesn’t believe it should come at the expense of a Bristol short track race. With one Bristol race becoming a dirt race, the Cup schedule is now down to five short track races (not including The Clash at the Coliseum). Despite fans begging for #MoreShortTracks, they have received less.

“I think that it’s the wrong track,” Earnhardt told the podcast Door, Bumper, Clear. “Brett [Griffin] talks about the mystique and aura of a dirt track like Eldora [Speedway], that’s what’s missing.

“If we’re going to race dirt, we need to be celebrating a historic facility that has a lot of amazing things from its past and taking Cup cars there and seeing how that works and being embraced by that community, right? We’re not going to the dirt community when we go to Bristol.”

I agree with Earnhardt’s view on this. NASCAR should try some dirt racing, but at a permanent dirt track with a long history. Eldora or Knoxville Raceway would be perfect. Eldora hosted Trucks from 2013-19, and it put on some solid racing. But Eldora’s management elected not to renew its contract with NASCAR, and one rumor is that it was because NASCAR would not give the track a Cup date. If that is true, it’s ridiculous on NASCAR’s part to throw dirt on Bristol rather than go to Eldora.

Knoxville hosted a disastrous Truck race last year and will again this year (yes, I’m expecting it to be bad again), but the Truck Series has wreckfests nearly everywhere these days, so that’s not a good baseline. Cup would probably run a much better and cleaner race at the track.

There’s a crowd that wants to see North Wilkesboro Speedway turned into a permanent dirt track, and that could be what Speedway Motorsports’ big announcement scheduled for April 16, is. But that would be a wrong move. Last year, I spoke to Steven Wilson of the Save the Speedway campaign for North Wilkesboro, and he was against turning the facility into a dirt track for several reasons.

“I can go on and on and on about the history of asphalt racing at North Wilkesboro Speedway,” Wilson said. “But if you ask me what happened on dirt there, I can only point to just a handful of things that even occurred there.

“You think about drifting events, one-on-one drag strips, burnout competitions. You think about so many other different opportunities. Filming is another thing that has, Joey Logano, Vaughn Gittin Jr. has been out there, Top Gear has been out there. … Would those opportunities have come to the track if it was dirt? I don’t think so. They would have been passed over. So you’re losing critical revenue streams to keep the track open and operating.”

So Speedway Motorsports should instead revive North Wilkesboro as the history-rich asphalt track that it is. And if the organization is looking to change one of the tracks it currently owns into a permanent dirt track, how about it bulldozes Texas or Kentucky Speedway and rebuilds one of them as a dirt track instead?

Even if the races this weekend at Bristol are wildly entertaining, people’s opinions on whether it should be a dirt race or not are likely already set. It’s too polarizing of an issue for a track that is universally loved by fans.

So let’s get away from dirt racing at Bristol and try it somewhere else — if anywhere at all.

Dirt race? Go back and apologize to Smoke and put an event at Eldora. And, most of all, This Sunday is Easter Sunday, Sometimes, certain things far over-ride a car race – even NASCAR. Let’s hope this is the last time a race is posted on a world-wide religeous holiday.

Well said. The cars are not dirt cars. NASCAR fans get an inferior race and dirt racing isn’t impressed because they have years of watching actual dirt late models or dirt modifieds put on great races on dirt because those cars are designed to be run on dirt. To say nothing of WoO, sprints, etc.

I live less than an hour from Knoxville. Compared to the racing done at Knoxville by drivers like Wolfgang, the Kinsers, the Swindells, Schotz, the Truck race was a disgrace. I’m not a huge dirt fan, but I know enough that I don’t want America’s intro to dirt racing to be clumsy NASCARs on a surface they aren’t designed for.

Not quite as dumb as playing roller hockey on ice, but it ain’t far.

My opinion, worth less than you paid for it, is that an organization that touts STOCK CAR in its name should run just that – STOCK CARS. And they should be able to race on any surface a customer could or would take their car on. Asphalt, concrete, dirt, gravel, sand… In the rain, the snow, the heat, the cold. A STOCK CAR should be able to handle it all in comfort.

All that said, if NA$CAR wants to race on dirt they should do it on a dedicated dirt track and not muck up a paved track by trucking dirt in/out. That’s idiocy in my opinion. Kind of like that temporary track at the football arena earlier this year. What a waste of time and material. This isn’t Monster Jam or Motocross!

Dirt on Bristol is just stupid. If you want to race dirt, go back to a REAL dirt track. Bristol in April is always going to be a weather crap shoot, so attendance won’t be equal to what the night race USED to be. Bristol is bristol and shold stay that way…without dirt.

I’m with Dale Jr. and others who think that racecar drivers should be able to excel at all of the driving disciplines to win a championship…that includes dirt tracks and road courses, and it does NOT include plate races where winners are determined by attrition and luck over driver skill.

I also agree with people who think Bristol isn’t the place for it, because it already offers great racing on its existing surface. If NASCAR wants to use an existing track for their dirt experiment, put dirt on Atlanta’s surface, since that track has been utterly ruined as a competitive venue.

Eldora should host two events a year, and there should be two other events on the schedule at iconic dirt tracks that are properly maintained as dirt venues.

I can understand some fans’ disdain for dirt racing, and Massie makes a good case here, but dirt races add variety to the schedule and another discipline for drivers and teams to master. I will take a dirt race at Bristol over a pack race at Atlanta, Daytona or Talladega eight days out of the week.