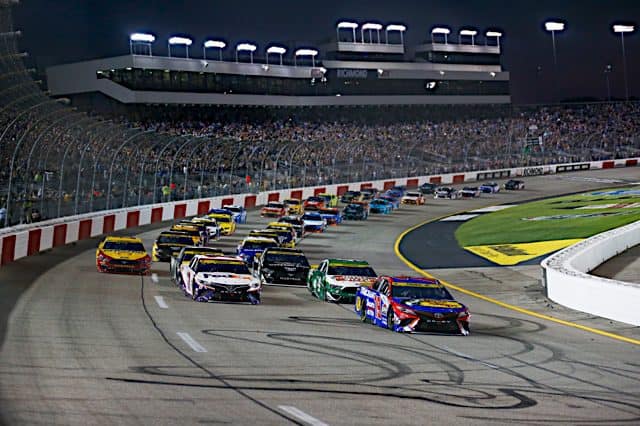 Richmond Raceway has played host to more than seven decades of NASCAR action; 76 years as of 2022, to be exact.

I have a very close relationship with the venue; I grew up going there and it’s where I covered my first race. But its history extends much further than my 24 years on this planet. Richmond’s history, in fact, stretches for more than three times that span.

Since it first hosted a NASCAR Cup Series race in 1953, the Commonwealth has hosted a race every year except ’54, and though it’s seen its periods of driver dominance (12 Richard Petty wins across a 17-race span from 1967 to 1975), it’s more recently become a place of parity. During its 20 races during the 2010s, 11 different drivers won a Cup event at the .75-mile oval.

The coming weekend marks the debut of the Next Gen car in competition at a short track in a points-paying race, as well as at the raceway itself. Testing was held there early in 2021.

Chastain is coming off a streak of top-three finishes, during which it seemed like he nearly had multiple races won before issues or unfortunate circumstances plagued him late, before finally scoring a win at Circuit of the Americas. Bowman, meanwhile, has a Las Vegas Motor Speedway victory alongside a near-win last week at COTA, finishing behind Chastain.

Bowman happens to also be the defending winner at Richmond; exiting Austin with impressive road-course showings in both the Cup and Camping World Truck series has to be a boost of confidence heading into Virginia. He made a late charge to score his third career win (and first in Hendrick Motorsports’ No. 48) in spring 2021, followed by three more wins as the season progressed.

The driver of the No. 48 already has a win this season, so it’s entirely possible that if his season follows the path it did last year he could be in prime position for a win at the short track, but things are entirely different with the Next Gen car.

Chief among those differences is the parity this season, with teams like Spire Motorsports and 23XI Racing claiming solid finishes early on. The fact that Cup hasn’t raced a staple short track at all with the new machine, especially with the close-quarters racing, means there could be a lot of bruised fenders and feelings once the checkered flag falls on Sunday afternoon.

It also begs the question of if Joe Gibbs Racing and the Toyotas will finally return to form. Richmond is its wheelhouse, with Kyle Busch and Denny Hamlin dominating there in the late aughts and early 2010s. Busch swept the 2018 races, but more recently it’s been Martin Truex Jr., who swept 2019 and won again in fall 2021.

One of the track’s primary backers is Toyota and the manufacturer sponsors multiple races there; it makes one wonder if this is where Camrys are back on top of the scoring pylon. Toyota seems to have struggled with the new car thus far, outside of Busch and Truex duking it out for what seemed like the win at Vegas before a late caution threw those hopes out the metaphorical window.

There’s also the matter of the day race returning to Richmond for the first time in several years. The heat can be ungodly in Virginia, especially in the dog days of summer; this upcoming spring weekend is nice, hovering around the 60-degree mark all weekend long. The summer race, though, is also a daytime event, meaning the heat will be borderline unbearable.

That aside, it’s been ages since Richmond’s hosted a day race for its second date.

There’s a lot of notable aspects of the race outside of the Next Gen’s short-track debut. Track president Dennis Bickmeier, who’s helmed the venue for over a decade, is stepping away after the weekend. The race is also coming on the heels of a violent, tornado-threat-riddled storm that blew through on March 31.

As a movie fan, I have to say: despite the parallels between last week’s race at COTA and the Academy Awards, with CODA winning best picture just hours after the race and Chastain’s first career win coming hours before Jessica Chastain won her first career Oscar, let’s just hope no driver slaps another competitor on Sunday afternoon. I doubt it, but let’s hope.