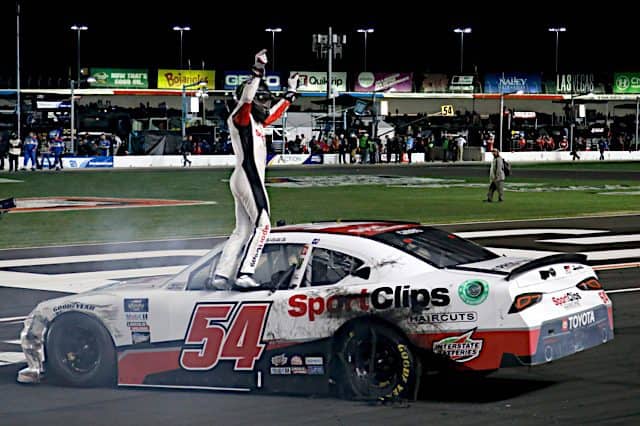 The win was good for Gibbs’ second on the season and only adds fuel to the flames of his villain/hero arc in the NASCAR Xfinity Series, depending on which side you land on. Austin Hill, A.J. Allmendinger, Riley Herbst and Landon Cassill rounded out the top five in the first race at AMS after its recent repave. As always, though, I wouldn’t be doing you race fans justice if I stopped there, so let’s dive in.

Our “Winners” section tends to lend itself toward small victories that might go unnoticed, and today, that was Kyle Weatherman.

I was there in person for the last race at AMS before this weekend, and I distinctly remember Weatherman being up front on a restart. I looked over at the friend I was there with and said, verbatim, “This is either going to be really good or really bad.”

Long story short, it was bad. Weatherman’s shifter locked into second gear, and before anyone could bat an eye, he was careening through the rest of the field, and not in a good way. Fast forward to today, and Weatherman finished P8. Not a bad way to bounce back, eh?

The second spot on this week’s “Winners” list goes to those that support Gibbs’ hero arc. The 19-year-old is making waves in the Xfinity Series, and it seems like it’s either for all of the right or wrong reasons.

I touched on the need for new villains in NASCAR in an earlier “Breakdown” after Gibbs’ won his first race of the year at Las Vegas Motor Speedway, so I’ll give you the short version now. Every sport needs someone to hate, but that someone must also have an equal amount of race fans that don’t hate him, such as Kyle Busch.

I truly think Gibbs is on his way to fulfilling that role. He drives with such passion and fierceness that some may define as reckless, but he takes home checkered flags and trophies, and to some people, that’s all that matters. Gibbs’ hero/villain balance is something to keep an eye on going forward, but as you could hear post-race, there’s plenty of people on both sides of the fence.

JR Motorsports has been at the forefront of our “Winners” section for plenty of races early on in the season. But on Saturday, they got shunted to the “Losers” section for a very unfortunate series of events. As every single JRM car lined up on the bottom side of the track to make a late-race run at the leaders, catastrophe struck.

Trevor Bayne got into Hill, which caused Bayne to lose control and inevitably find the door of Josh Berry with the nose of his No. 18 Toyota Supra. Throughout the carnage, every single JRM car making a push to the front was collected and essentially knocked out of contention for the victory — a tough day at the office for JRM, to say the least.

Second on our “Losers” list goes to Reaume Brothers Racing, or more specifically, whoever the hauler driver is for RBR. Having been to AMS, I can tell you that there are tunnels aplenty, just like every other intermediate racetrack on the NASCAR circuit. These tunnels vary in size, from walk-throughs to drive-throughs, and are usually pretty well-marked when it comes to maximum height, etc. Except for one, apparently, and it was the one that the RBR hauler found. If you ever have a rough day at work, just think to yourself, “It could be worse. I could be this guy.”

Here’s the damage to the Reaume Brothers Racing hauler at Atlanta. #NASCAR pic.twitter.com/BsSf0ZKFBc

Alright race fans, it was slim pickings this week, in my opinion. If this were the NASCAR Cup Series, it’d be a different story. But alas, here we are, deciding which up-and-comer brought the right scheme to the track this week for the Xfinity Series. It was a week filled with base schemes, some of which have already made our list. There was one, however, that shined a little brighter than the rest this week.

Brandonbilt Motorsports partnered with Zero FG energy drinks on this clean scheme. As I’ve said before, I’m usually not a fan of the whole colors fading into each other thing, but these don’t really fade. It’s more of a splatter, and that gives it some character. The only thing that would make it better? NASCAR bringing back gold wheels. *mic drop*

See what I did there? Welcome to our new “Xfinity Breakdown” section, “The Playoff Pit.” We’re no longer at the starting line of the 2022 Xfinity season. It’s a marathon, but at this point, we’re at least nearing our first turn. Therefore, it’s a perfect time to start giving you race fans a look at what the playoff picture looks like for the up-and-comers of the Xfinity Series. We’ll be using Jayski.com’s playoff tracker, so without further ado, here’s the breakdown.

We’re up to four different winners on the season, with three of which being full-time, which means that a fourth of the playoff field may have already been set only five races in. As it sits Gibbs, Noah Gragson and Hill are in. Keep your eyes out for any wild changes, but we’ll start keeping up with it each week right here.

Now, on to the elephant in the room: the repave. Personally, I think it went extremely well in its Xfinity debut. Before, AMS just felt like another 1.5-mile track that had some old pavement and wore tires down faster. Now, though, it’s almost like a miniature Daytona International Speedway, where the draft is the great equalizer. We saw this being evidenced today with top-10 finishes from teams that typically hang out at the middle or back of the pack on 1.5-mile tracks, such as we mentioned with Weatherman.

That makes Atlanta different, and in a series full of mile-and-a-halves, that means so much in terms of drawing in more race fans and teams to the Xfinity sSries.

Let’s go road racing folks. The Xfinity Series is off to Circuit of the Americas for the first road race of the 2022 season. Kyle Busch took home the win at COTA last Xfinity season, and with him not entered, someone else will undoubtedly be looking to stake their claim to the first road course win of the year. The green flag drops at 4:30 p.m. ET, and the race will be aired on FOX Sports 1 along with the Performance Racing Network.

It’s going to be a long year for the anti-Gibbs crowd watching the Xfinity series. I expect to see this headline banner on many articles looking ahead.

The kid literally has everything. The Total Package.

Bill B
Reply to  Griffin Hunter

Not quite everything. His personality sucks, he acts like an entitled douche-bag.

Did the producers tell Joey and Brad to be quiet about the Dinger running over the chose line?