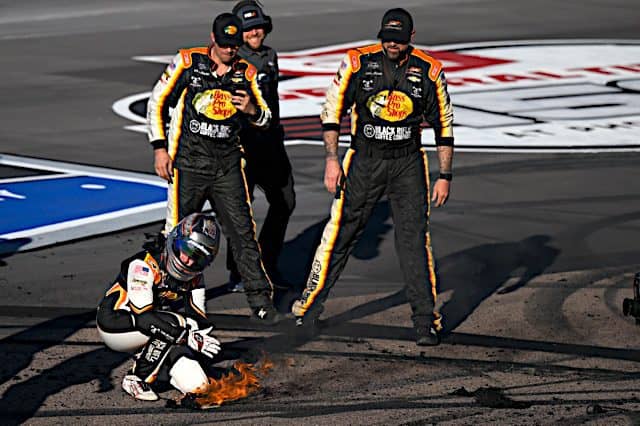 When a NASCAR Xfinity Series driver graduates to the Cup Series that offseason, the question is always: Who will step up?

If you haven’t watched an Xfinity race this season, you missed some great racing. But you’ve also missed watching Noah Gragson put his name alongside some elite company.

At the season opener at Daytona International Speedway, Gragson finished third. He followed up with a pair of second-place finishes at Auto Club Speedway and Las Vegas Motor Speedway.

Starting the season off with three top-three finishes put Gragson on a very exclusive list that includes drivers who have won a combined 11 NASCAR Cup Series championships. His name is etched in the history books beside Dale Earnhardt (1990, 1991), Terry Labonte (1995), Kevin Harvick (2005), Elliott Sadler (2012) and Brad Keselowski (2014), who all also accomplished that feat in Xfinity.

Then in the season’s fourth race, Gragson dominated, leading 114 laps of 200 in Saturday’s (March 12) United Rentals 200 at Phoenix Raceway. He now stands beside Harvick and Sadler as the only drivers to start an Xfinity season with four straight top-three finishes.

Not only has Gragson finished well when the black-and-white checkered flag waives, but also the green-and-white one too. Through eight stages in 2022, he has finished fifth or better in seven of them. In the past four stages, two at Las Vegas and two at Phoenix, Gragson has won three and finished second in the other.

Simply put, Gragson is as hot as a smoker from Bass Pro Shops. And he has so far smoked the competition.

What changed on the No. 9 JR Motorsports team from 2021 to 2022? Not much except for the crew chief. Dave Elenz was Gragson’s crew chief for all of his first three seasons in Xfinity after winning championships with William Byron (2017) and Tyler Reddick (2018) at JRM. Elenz departed the team to take over Cup crew chief duties for Erik Jones at Petty GMS Motorsports.

Elenz and Gragson spent 99 races together, accumulating five victories, 39 top fives and 67 top 10s. They reached the Championship 4 in 2021.

Things seemed to be clicking better than ever between Gragson and Elenz just as news broke that Elenz would not be returning to JRM in 2022. How would Gragson adapt to a new crew chief after having one that worked so well with young drivers? It’s fair to say those concerns have been silenced.

JRM tabbed Luke Lambert in January to succeed Elenz as Gragson’s crew chief this year. Lambert has been a crew chief since 2011, when he took over for Todd Berrier as Jeff Burton’s Cup crew chief. In 2012, he became Sadler’s crew chief in Xfinity, where they scored four wins and finished second in the championship. In 2013, Lambert returned to Richard Childress Racing’s No. 31 team, beginning with Burton in 2013 before Ryan Newman arrived in 2014. He remained with RCR through 2019, where his lone win came at Phoenix in 2017 with Newman.

Lambert departed RCR following a difficult 2019 with Daniel Hemric and moved to Roush Fenway Racing (now RFK Racing), where he served as Chris Buescher’s crew chief for all of 2020 and through the first 31 races of 2021 before spending the final five races with Newman once again.

See also
Did You Notice?: 4 NASCAR Races in 2022, 4 Drivers Flying Under The Radar

Now back in Xfinity, Lambert brings a wealth of Cup knowledge from primarily two different camps. Even if RCR and Roush weren’t serious threats to win every week while he was there, Lambert was a solid choice to succeed Elenz, and it’s proven to have been the right one based on the early-season success and Phoenix victory.

When Lambert was with Sadler in 2012, they won the second and fourth races of the season, respectively at Phoenix Raceway and Bristol Motor Speedway. The argument could be made that if certain events transpired differently for Gragson, he could have two wins, maybe even three.

2022 is Gragson’s fourth season in Xfinity, and it can go without saying that this is the best start to a season for him. But by the same token, Gragson has traditionally been a strong starter. Aside from an inconsistent 2021, Gragson had an average finish better than 10th in both 2019 and 2020. It is important to remember that Gragson nearly won at Homestead-Miami Speedway early on in 2021, but he crashed into David Starr late in the race. The poor start to the season carried until the early fall, when Gragson finally found a groove.

When we look back at Sadler, it’s clear Lambert helped improve his performance. In both 2011 and 2012, Sadler finished second in the standings, but his average finish improved by three whole positions in 2012 while scoring more top fives. Sadler’s lead-lap finishes increased as well, and not to mention he won four times in 2012 after going winless in 2011.

This weekend at Atlanta Motor Speedway is the first on the new pavement and configuration for all top three divisions in NASCAR. Therefore, several unknowns are attached to how each race will play out, but if Gragson can continue his top-three finish streak he would set a new Xfinity record.

In 2005, Harvick technically scored five straight top three finishes to start the season, but they were not consecutive. Harvick finished second in that season’s first four races before missing races five and six. He returned at the season’s seventh race at Bristol and won. Should Gragson finish top three in Saturday’s Xfinity race at Atlanta, he’ll have a record all to himself.

Even if Gragson finishes fourth or worse at Atlanta, it shouldn’t spoil the success he and Lambert have enjoyed to begin the season. Their consistency has been the one constant through four races, and it’s not wrong to bet that their chemistry is clicking. It’s safe to say that Gragson has filled the void that Austin Cindric left with his move to Cup, and it looks like the ceiling Gragson has with Lambert is a high one. The rest of the Xfinity field should be on notice.

Not that my evaluation matters, just an observation, but I think Luke Lambert is one of the best crew chiefs around. If I were starting a team, I would really want him. Just an opinion.