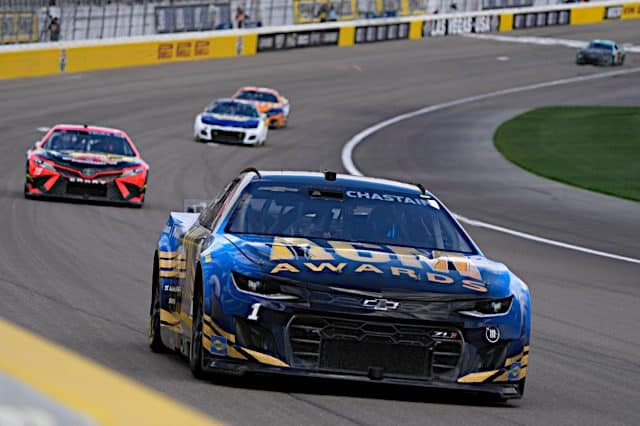 NASCAR’s west coast swing carried onto Las Vegas Motor Speedway this past weekend, giving us a few high-pressure moments and some daring gambles in both events. But when the dice were done rolling, Alex Bowman, Ty Gibbs, and Chandler Smith came out of Las Vegas as the big winners.

It may just be the third race weekend of the 2022 season. And all three touring series will come back to the speedway in the fall for a playoff weekend. But out in Las Vegas, the stats piled as high as poker chips on the table. So here are some roulette numbers the ball landed on:

Although it was Bowman who took home the win, Ross Chastain had the best-in-class car for a good while during Sunday’s Pennzoil 400. Chastain’s No. 1 Chevrolet held the lead for 83 laps, the most he’s ever led in a single Cup race, and won stage 2 before settling for third on the sole overtime attempt. It was a great way for him to give Trackhouse Racing more time in the spotlight.

It took a while for it to happen, but an unfortunate milestone was set last weekend out in Las Vegas. Zane Smith was disqualified from a runner-up finish in Friday’s Truck race, while Joe Graf Jr. was disqualified after finishing 29th in Saturday’s Xfinity race. It’s the first time in many years for two or more disqualifications to occur during a single race weekend. Thankfully, situations like this are rare, so hopefully we won’t have to see it happen again for a while.

Bowman’s win on Sunday was his seventh career Cup Series win and the seventh total win for Hendrick Motorsports at Las Vegas Motor Speedway, joining Jeff Gordon (1), Jimmie Johnson (4), and Kyle Larson (1), who have scored wins at the track for the team.

One driver who posted another noteworthy performance at Las Vegas is the driver of car No. 7 for Spire Motorsports, Corey LaJoie. By finishing 15th on Sunday, he scored his second top-15 finish in three races (14th – Daytona 500), and sits 24th in the standings, ahead of some big-name drivers.

The number 13 is typically regarded as unlucky for most. But it has been lucky for Bowman, as his last three Cup wins have come from the 13th starting position (2021 Pocono, 2021 Martinsville, 2022 Las Vegas). Watch out for the next place he’ll qualify 13th, because you may like his odds at victory when that occurs.

Ryan Ellis also had a career day for himself in Saturday’s ALSCO 300, as the 32-year-old Virginia driver piloted the No. 44 Alpha Prime Racing Chevrolet to a 13th-place finish on the lead lap. It is his best finish in his 57th series start, dating back to his debut in 2012 at Road America.

In regard to last Sunday’s stat of 19 different top-10 finishers in two races, six more drivers scored their first top 10s of the season to bring the grand total up to 25 (Bowman, Chastain, Martin Truex Jr., William Byron, Tyler Reddick, Christopher Bell). As stated by Mike Joy on FOX, this total is the biggest it’s been since 1973. Perhaps more drivers can pull off a surprise top 10 at Phoenix and bump up the total even more.

You may not believe it at first, but this is where Denny Hamlin sits in points after Las Vegas. This opening three-race stretch is by far the worst opening to a season he’s had in his career. Finishes of 37th, 15th, and 32nd have left him with an average finish of 28th and has him sitting 30th in points. His teammate Bell isn’t doing much better either in 29th. Hamlin’s three-race streak of not getting a top-10 finish is not as bad as his 16-race stretch without one in 2013, and he does have time to pick himself up again and get his No. 11 team back into a winning groove.

I have to think this is a serious overreaction from NASCAR. As I understand it, 17 of 20 lug nuts were tight. The car obviously didn’t have any vibration issues, so none of the wheels were even loose. Yet Cup cars have been having wheels come off on track & they are penalized but not DQed. But the team spent a lot of $$ to be part of the show only to have everything taken away. This penalty seems wildly out of proportion to the infraction. I’d have no problem with a fine, & suspending the CC.

Here’s another thing I can’t understand, if a team blatantly cheats, (think Petty, with the wildly oversize engine) & wins a race. They get to keep the win. How do you square these two infractions?