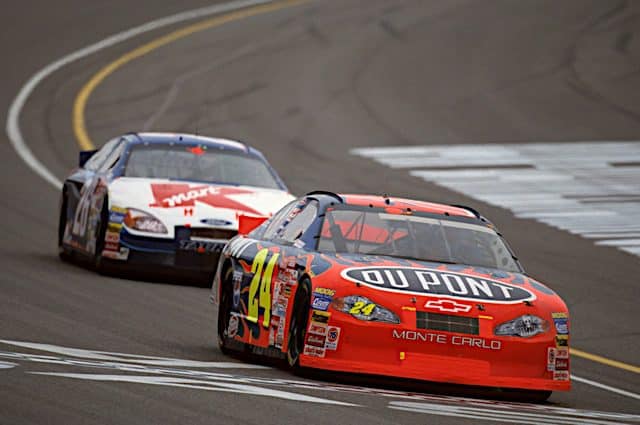 Sin City is a lot of things.

It’s the subject of an Elvis Presley song. It’s a 2005 Robert Rodriguez film. It’s the setting of movies like Casino and The Hangover, as well as a recurring environment in Twin Peaks: The Return. The city is also, of course, a huge tourist and gambling destination, as well as the current home of the recently-relocated Las Vegas Raiders and the relatively new Vegas Golden Knights.

It’s also the site of Las Vegas Motor Speedway, where NASCAR will visit this weekend for a trifecta of races. It’s the sport’s 27th season at the track and the venue’s 25th year hosting the NASCAR Cup Series, essentially making racing arguably the most consistent sporting presence in Vegas. All three series will compete, with the buildup culminating in the Pennzoil 400 on Sunday (Mar. 6).

The site of the mile-and-a-half oval has had different looks since it opened in 1972. The current calendar year marks 50 trips around the sun since the original drag strip and road course opened, followed by a 3/8-mile circuit and, eventually, the 1.5-mile track NASCAR has raced on for more than two decades.

After doing some statistical diving, the track has historically proven to be a springboard for eventual NASCAR champions, with five different drivers winning at Vegas en route to seven combined crowns.

Racing in the Nevada desert’s speedway began in 1998, where Mark Martin scored his first win of the season en route to seven total victories and a runner-up finish in the standings. Jeff Burton ruled Sin City for the next two years, but Jeff Gordon took that mantle — and the championship, eventually — in 2001.

Matt Kenseth followed just two years later, with Vegas his only win during his 2003 championship campaign, and Jimmie Johnson reeled off LVMS victories in 2006, 2007 and 2010 during his streak of five straight titles.

After all that happened in less than a decade, things have calmed down, with only Martin Truex Jr. and Kyle Larson‘s claiming the checkered flags in Sin City en route to titles in 2017 and 2021, respectively.

In fact, nearly every single Las Vegas Cup winner in its seasons with one date, as well as every spring winner in the recent years with two visits, has gone on to win multiple races over the course of that campaign. Regardless of how many dates the track has had during its time on the NASCAR circuit, it has been the site of a spring race every single season and quite a few jumping-off points for championship contenders.

The only two outliers to the multiple-win statistic above are, curiously, both past Roush drivers — Kenseth, whose Vegas win was his only triumph of a 2003 championship run, and Carl Edwards, who won in 2011 en route to a runner-up finish in the standings.

Additionally, nearly every driver’s win at Vegas has given way to additional victories later that season. A few outliers, the most significant of which is Kenseth, populate this statistic as well; the No. 17 won Rockingham Speedway prior to Las Vegas in 2004.

Las Vegas tends to lead to later-season success as a whole. Outside of the seven eventual champion spring race winners, five drivers have gone on to runner-up championship results. Two of those instances belong to Carl Edwards, with his wins in 2008 and 2011.

An additional three drivers finished third in points and five ended up fifth; all told, 19 of the 24 winners of the single or spring race at Vegas each year have finished top five in points in their respective years.

Things are a lot less consistent in NASCAR’s lower divisions, though: Ricky Stenhouse Jr. (2012) and Tyler Reddick (2019) are the only two drivers to win a title in the same year they won Las Vegas, while no Camping World Truck Series competitor has ever rolled into victory lane in Sin City before later closing the year at the top of the truck standings.

Last year, Larson and Denny Hamlin won the spring and fall races, respectively, after leading more than 100 laps. Larson’s attempting to continue a strong opening to his title defense; Hamlin’s never won a race in the spring at Las Vegas. If the No. 11 can get to victory lane in Sin City on Sunday as he seeks his first title, it’s a pretty good harbinger of things to come for him — or whomever may win — in 2022.