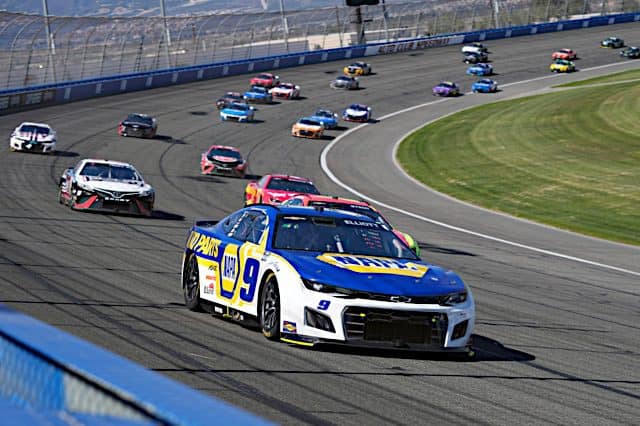 A bit of unrest devolved into a bit of a squall last July when, seemingly out of nowhere, Atlanta Motor Speedway announced that it’d be reprofiling its racing surface. With many drivers publicly stating that they had not been asked for input on “The New Atlanta,” and Kyle Busch offering opinions that can’t be said in front of a family audience, the question was raised of how much say drivers should have in track design.

Sunday at Fontana, where this version of the car had never raced, as well as the Los Angeles Memorial Coliseum for the Busch Light Clash, proved that the less you give teams time to know what to expect at a track, the better the racing will be. Was it difficult for drivers and teams? Absolutely. It’s supposed to be. If driving these cars was easy, anybody could do it, and one of the goals of this new car should be to make it hard to do. If not, you could have drivers in cars with no business being there, who’ll pose a safety risk to those around them.

Sunday was the perfect storm of the unexpected. The challenge going forward becomes somehow recapturing that. Was Sunday’s race, one that was probably the best intermediate-track race since Atlanta in 2011, due to the track or the new car? We’ll find out next week in Vegas.

2. Hold up on those short track plans

You don’t have to hang out on social media during a race to hear fans clamor for “more short tracks.” Even with that in mind, the plan for Auto Club Speedway to radically convert its racing surface from its current 2.0-mile layout to a half-mile should be put on hold based on what the Next Gen car produced on Sunday afternoon.

What was shown was this: The track’s not the problem, and that the cars and the aero package actually were. Sunday, you saw faster cars actually being able to get out and pass one another, not the other way around.

Much like we saw with the trend of, “let’s make this race a night race to make it exciting,” relying on short track races to fix all ills is equally as misguided. After all, long-time fans of Bristol Motor Speedway would dispute the excitement level at the Last Great Colosseum in recent years.

If you grew up watching racing in the 1980s and into the 1990s, Richard Childress Racing was among the top teams in the sport. Having The Intimidator drive the iconic No. 3 racecar obviously helped. But now, for the first time since Jeff Burton and Kevin Harvick were teammates at the shop located in Welcome, N.C., you can make the argument that RCR may have two drivers capable of winning multiple races.

Before late-race tire issues derailed his hopes, Tyler Reddick had the car to beat, winning the first two stages. Then, in the final stage, Austin Dillon was in a position to win in the closing laps. It’s important to note that one race does not make a season. Remember, RCR had the field covered in 2020 at Texas but could not capitalize on that magic. The bottom line is that a good portion of tracks on the schedule are intermediate tracks. If RCR can run on those similar to how it did this past Sunday, it’ll be more than just two drivers hoping to scrape into the Playoffs.

4. Is this the new Chase Elliott?

It’s been an unenviable position for Chase Elliott from day one. Here he was, the son of a NASCAR legend and Hall of Famer known for his rabid fans (see their efforts in Most Popular Driver voting as an example), quickly moving up the racing ranks. As if the desire for him to rekindle the family legacy by some of Bill Elliott’s fans was not enough, he even took over the No. 24 car following Jeff Gordon’s retirement.

So it’s easy to understand why a driver like the younger Elliott would tread lightly and want to carve his own legacy. But Elliott’s not the all over the place, find-a-camera type. Living in North Georgia probably exacerbates that, and that’s part of what helped Awesome Bill’s family operation thrive in the middle 1980s as it was tucked away from the center of the racing universe in Charlotte.

That image of the quiet, soft-spoken Chase Elliott may be coming to an end. First, it was last fall’s spat with Harvick and the “Merry Offseason and Happy Christmas” quip. Then came Sunday, when Elliott took issue with eventual race winner and teammate Kyle Larson washing up and making contact with him. Elliott would later fade up the track, having fallen off the lead lap, to slow Larson as he led the race. Thankfully for Hendrick Motorsports, it did not impact the race, but it could have.

Sunday showed us a different side of Elliott, and a sport with one of its most popular drivers being more outspoken is a great thing. Anyone have the 411 on the milk and cookies arrival at Hendrick Motorsports between Elliott, Larson and Mr. Hendrick?

5. What’s the fix to the tire problems?

The tires on the NextGen Car continue to be an issue, much to the disdain of drivers like Reddick and Christopher Bell on Sunday. Even Bell’s wife, Morgan, chimed in.

Do better NASCAR.. this is absolutely ridiculous.. we all knew this was a problem for almost a year now! How is this still not fixed.. https://t.co/wE4fnk8SU7

NASCAR made a minor adjustment in not starting the crash clock until a wrecked car arrives on pit road, but more flexibility will be needed if the current issues teams are having with the tires continue.

Mechanical problems are one thing. But when you have issues surrounding a new car that was frankly rushed to the track quicker than it should have been, NASCAR owes it to teams to figure out why tire issues are continuing and rectify them before the series arrives in Vegas. Considering eliminating the crash clock altogether would be one option, without question, that should be considered.

NASCAR could not have asked for a better start to the season, but another Brickyard 400 tire debacle would more than defeat that.

The contact between teammates was unfortunate, but I can’t believe it was deliberate. That was a move that well could have wrecked both cars directly involved. As well as a number of the other front runners.

Chase will continue to be the sport’s most popular driver. But until such time as he can match Kyle’s numbers, he’s going to be driving in his shadow.

I know that won’t be easy to accept, but I think it’s a fact. Besides he’s messing with his Chili Bowl owner, & I enjoy seeing the progress he’s making there. So I hope unlike Harvick, he puts this behind him & moves on.

The whole field, not just Chase, is driving in Kyle’s shadow. Kyle has been putting up incredible numbers on everyone in NASCAR, Chase included.