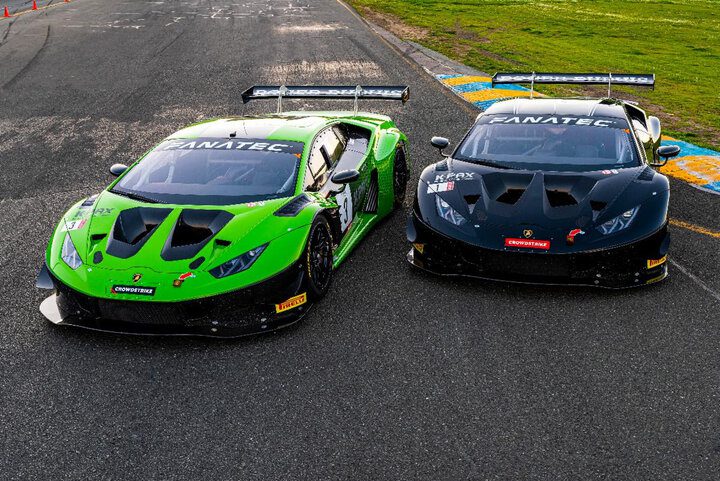 K-PAX Racing announced Thursday (Feb. 10) that they will be returning to Fanatec GT World Challenge America Powered by AWS full-time in 2022 with two Lamborghini Huracan GT3 EVOs.  In addition, the team plans to field one car in the Intercontinental GT Challenge, with a specific focus on July’s TotalEnergies Spa 24 Hours.

Both of the team’s entries have been renumbered for 2022.  The previous No. 3, driven by Andrea Caldarelli and Jordan Pepper to the 2021 Fanatec GT World Challenge America Powered by AWS championship, will run the No. 1 in 2022.  Caldarelli and Pepper will return to the car for the full season.

“I am really happy to do my second year with K-PAX Racing and Jordan [Pepper],” Caldarelli stated.  “I am also really excited, because we have started a development work last year. I am glad we can keep competing together and improving and growing every race weekend. We all have one more season of experience, so the preparation work will be much easier than last year, but we are all looking forward to keep working with the same passion as last year.”

The green No. 6 will now be the No. 3 with a brand-new lineup.  Giacomo Altoe will join the team for the full season along with Misha Goikhberg.  Altoe and Goikhberg will replace Corey Lewis and Giovanni Venturini.  Unlike last year, the No. 3 will be fielded as a Pro-Am entry.

“I am very excited to join K-PAX Racing, a team with such rich history, as well as competing in GT World Challenge, a very strong GT championship,” Goikhberg said.  “K-PAX Racing is a very strong team, with very good relationship with Lamborghini, which I am excited to continue.  So far, I’ve seen nothing but extreme professionalism and commitment to winning from Darren [Law] and the team.”

Goikhberg comes to the team from GRT Grasser Racing Team, where he ran in the IMSA WeatherTech SportsCar Championship’s GT Daytona class in 2021.  There, Goikhberg finished 17th in points with a best finish of second at Belle Isle Park in June.

Altoe drove for TR3 Racing in Fanatec GT World Challenge America powered by AWS in six of the seven rounds (the exception being VIR), mostly in the No. 9 Lamborghini.  Four of the races were in a Pro-Am lineup with either Ziad Ghandour or Martin Fuentes.  One was in a Pro entry with Dennis Lind.  For the Indianapolis 8 Hour, Altoe moved to the No. 10 alongside John Megrue and Bill Sweedler.  Altoe’s best finish was second in the first race at Sebring during his sole Pro weekend.  He ended up 10th in Pro-Am points with three podium finishes, the best of which being second (sixth overall) in the second race at Road America.

For the Intercontinental GT Challenge, the team will have one Huracan that will be shared by Caldarelli, Pepper and Marco Mapelli.  It appears that they will not make the trip to Australia for the rescheduled Liqui-Moly Bathurst 12 Hour in May, but they will race at Spa and Indianapolis.  For K-PAX Racing, it will be the second time that they have competed in Europe, having previously done so in 2020 with the Bentley Continental GT3.

“Last year was a dream season for us,” said Darren Law, K-PAX Racing’s program manager.  “Jordan [Pepper] and Andrea [Caldarelli] work so well together, and it is hard to find a better driver pairing.  Given that 2021 was our first season with Lamborghini and doing what we did was amazing, but now that we have a full season of data on this car, our relationship is growing and much stronger with Lamborghini, so we look forward to defending our title.”

The Fanatec GT World Challenge America Powered by AWS season is scheduled to get underway with two races at Sonoma Raceway (where K-PAX Racing just so happens to be based) the weekend of April 15-17.  Frontstretch will provide recaps of on-track action on the undulating road course.