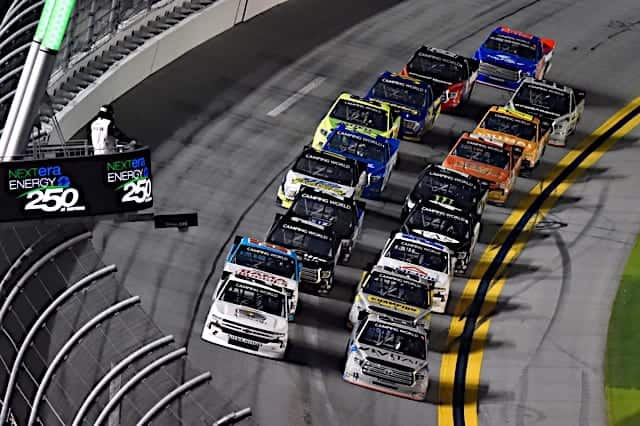 More than three months since the conclusion of the 2021 season, the NASCAR Camping World Truck Series is just over a week away from embarking on its 2022 venture.

The season will open with its usual beginning to a tripleheader weekend with the NASCAR Xfinity and Cup series at Daytona International Speedway and end with a trip out west to Phoenix Raceway in early November. While the 2021 schedule dropped to 22 races, the series will once again contest 23 events, but this time it happens at 22 different racetracks, with the only repeat being Kansas Speedway (May and September).

Get those plans set!

Take a look at the 2022 schedule for the #CampingWorldTrucks! pic.twitter.com/MZvyEafuhX

But perhaps what’s more exciting is the return of Lucas Oil Indianapolis Raceway Park for the first time since 2011. The 0.686-mile track debuted on the 1995 schedule in the inaugural Truck Series season and remained there until the 2012 schedule was released. The change coincided with a reduction from 25 to 22 races on the schedule and the Xfinity Series moving to run the 2.5-mile Indianapolis Motor Speedway.

Meanwhile, there will once again be three road course races, but the only returning track from 2021 is Circuit of the Americas, and frankly, despite the issues faced throughout that weekend, it’s nice to see the south Texas track getting another shot at what hopefully won’t be a deluge-plagued weekend. Additionally, the removal of the Daytona road course and Watkins Glen International means the addition of Sonoma Raceway and Mid-Ohio Sports Car Course, which will no longer host the Xfinity Series.

Of course, the new season wouldn’t be complete without the return of the Triple Truck Challenge, a trio of races designated for drivers who have declared for points in the Truck Series. Contested at World Wide Technology Raceway (June 4), Nashville Superspeedway (June 24) and Mid-Ohio (July 9), the Triple Truck Challenge provides bonuses to the winners of each race with increasing prize money for any driver who wins multiple events in that stretch.

The really good news for fans is that despite there only being 23 races on a schedule designed to start and end alongside the Cup and Xfinity series, the longest break during the season comes with three off weekends between the second and third events during the Round of 10 in the playoffs.

On the driver side of things, many of the smaller teams haven’t announced their intentions yet, but that’s typical up until the season begins. With that said, we do know that two of last year’s playoff drivers in Sheldon Creed and Austin Hill will not be returning to the series. Both drivers revealed their moves to the Xfinity Series. In fact, they’ll be teammates at Richard Childress Racing as they both run for the Rookie of the Year award.

In Hill’s place, Hattori Racing Enterprises expands to two full-time teams in 2022 with drivers Chase Purdy and Tyler Ankrum, both of whom drove for GMS Racing in 2021, scoring a combined three top fives (Ankrum) and seven top 10s (five for Ankrum and two for Purdy). Meanwhile, after losing Creed, Purdy and Ankrum, GMS will run just two full-time entries, likely in large part due to a new Cup Series partnership and the formation of Petty GMS Motorsports. Grant Enfinger, who split the No. 98 Toyota for ThorSport Racing with Christian Eckes joins the team for the next two seasons alongside Jack Wood, who ran a part time schedule for GMS last season. Additionally, GMS will partner with CR7 Motorsports, which will field a full-time ride for Blaine Perkins.

Speaking of ThorSport, defending champion Ben Rhodes will return to the organization alongside Matt Crafton. But with the departure of Junior Joiner at the end of the 2021 season, Crafton will have a new crew chief atop the pit box in Jeff Hensley, who had previously been announced as Brett Moffitt‘s crew chief in the Xfinity Series. Additionally, Eckes returns to pilot the No. 98 full-time after running a partial schedule last season.

After a pair of dismal seasons where he missed the playoffs in back-to-back years for ThorSport, Johnny Sauter will run a partial schedule with the team with Joiner atop the pit box. The 2016 series champion also joins new team G2G Racing, which plans to field two full-time entries. Matt Jaskol will drive the organization’s No. 46 Toyota for the entire season, while Sauter is schedule to share the No. 47 with Roger Reuse and team owner Tim Viens. Jaskol made six Xfinity starts last season but will make his debut in the Truck Series this year.

Jaskol isn’t the only new face we’ll see this season, though. Ryan Preece, who has been hired as a reserve driver for Stewart-Haas Racing, is set to run seven events with David Gilliland Racing, alongside performing simulator work for SHR and running five combined races for the organization’s partners in Cup and Xfinity.

Of course, coming into this season, the title favorite once again has to be John Hunter Nemechek after he took a gamble on himself and dropped from the Cup Series to the Truck Series last season. That’s not to say someone like Crafton with the experience of veteran crew chief Hensley atop the box won’t breathe new life into the No. 88 team.

One of the more important drivers to keep an eye on will be Zane Smith, though. He’s finished runner-up in the championship battle in back-to-back seasons with GMS but makes the move to Front Row Motorsports for 2022. Remember when Todd Gilliland made that move? He didn’t win right away but you could just see he was more comfortable behind the wheel after leaving Kyle Busch Motorsports, and that confidence boost, along with two full-time seasons with the organization on the Truck Series side has turned into a Cup opportunity.

As we count down the days to kicking off the 2022 season, get ready to settle in and watch one of the most versatile schedules the series has seen in years. Add in the amount of talent behind the wheel, alongside the up-and-coming potential and you’re sure to have yet another season of reasons to keep watching week after week.