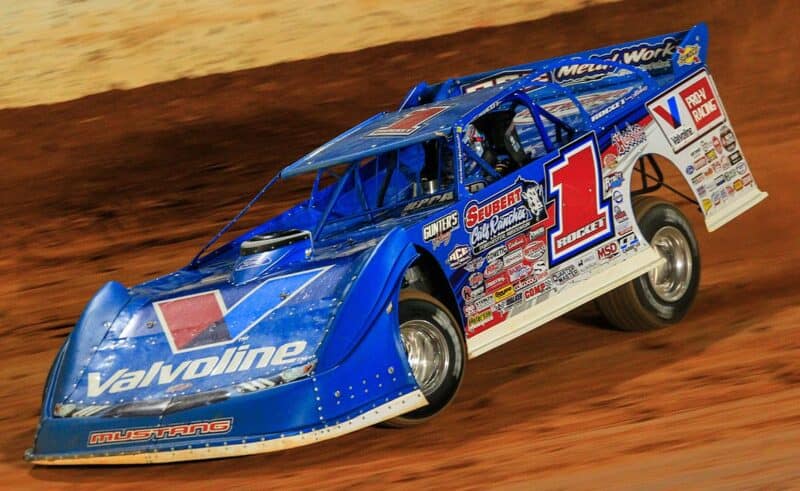 Midwesterners Devin Moran and Brandon Sheppard continue to steal the thunder from Lucas Oil regulars during the tour’s Winter Nationals residency in Florida.

It may have been three nights ago, but the dust is still settling from what will go down as one of the best finishes of the 2022 season, one that saw veteran Tim McCreadie do just enough to capitalize on Devin Moran overdriving turn 4 coming to the checkered flag at Bubba Raceway Park Monday night.

Though McCreadie has picked up right where he left off in terms of consistency and leads the points among expected LOLMDS regulars, the story of the Winter Nationals thus far has been Moran, who finished on the podium in all three Winter Nationals features this midweek, including a dominating win Tuesday night at Bubba.

Moran’s podium streak was extended Thursday at All-Tech Raceway courtesy of a charge from 15th to second, a race won by defending World of Outlaws late model champion Brandon Sheppard. Brandon Overton finished ninth in Thursday’s feature, the first A-main he started in 2022 and didn’t win.

Through six LOLMDS races in 2022, Devin Moran’s average finish is 1.66. Those type of numbers don’t lie. And with the Chili Bowl in the rearview, Walkapedia’s statistical prowess has been thrown at the LOLMDS Winter Nationals. Check this one out.

Wow. @DevinMoran99 goes 15th-to-2nd and keeps the streak alive with a last lap pass at All-Tech.

NOBODY has ever made it 7 consecutive. He’s got a chance tomorrow.

Latham, N.Y.’s Andrew Buff went further upstairs than any other car had on a restart inside of 10 laps to go during Thursday’s opening feature for the DIRTcar Northeast sportsman modifieds and made it work, besting his brother Justin to score the first win of the South of the Border Showdown at Lake View.

Last year’s LOLMDS hardware winners are up to their usual tricks thus far into 2022. McCreadie is third in the overall points standings and first among the drivers expected to run the full tour in 2022, already with a win on the books. Also, last year’s Rookie of the Year Ricky Thornton Jr. has now scored three consecutive top-finishes since the Winter Nationals left Golden Isles.

Monday was a banner day for crate late model ace Mark Whitener, scoring a fourth-place finish in Big Frog Motorsports’ No. 58 super late model at Bubba Raceway Park; the team, like the racetrack, is located in Ocala, Fla.

Whitener’s success story earlier this week proved short-lived, however. The No. 58 team missed the feature at Bubba on Tuesday after twice failing the “droop rule” test in tech, then finishing a distant 24th in Thursday’s feature at All-Tech Raceway.

Mike Marlar has been all but invisible during the Winter Nationals despite his winning the points title in the Wild West Shootout just two weeks prior. In the six features he’s started since returning from New Mexico, the average finish for the No. 157 has been a woeful 22.5.

Though Josh Richards told DirtonDirt this week that he remains optimistic about the team that he has assembled with Boom Briggs’s late model operation in taking on the World of Outlaws late model tour in 2022, the results have yet to show up; Richards has scored only one top 10 in six feature starts so far this season.

James Essex and the MAVTV telecasts thus far in 2022 haven’t gone more than 15 minutes without mentioning that the LOLMDS is offering an all-time high of $150,000 to win the series championship. Yet despite that, it certainly appears that the Brandon Overton “outlaw” schedule is winning the day. Overton skipped both Winter Nationals at Bubba Raceway Park after winning two straight at Golden Isles, while current points leader Devin Moran is not expected to contest the full LOLMDS tour despite his red-hot start.

Not planning on it. He said last night they’re going to Bristol with Outlaws on 4/29-30 when Lucas goes to Tri-City & Macon.

Most telling of all though? Johnathan Davenport also skipped the Winter Nationals races at Bubba, indicating that, at least for now, full-time LOLMDS racing isn’t his cards for 2022. With such a proliferation of big-money races across LOLMDS, the World of Outlaws tour and the new XR Super Series, chasing big wins can ultimately pay better than points racing. That is a beautiful thing.

Hot dogs and hamburgers will always have a place on any concessions menu, but short tracks that don’t have a signature menu item are missing out on a golden opportunity to distinguish themselves. I only bring this up because not only was Lake View Motor Speedway a great facility with friendly staff and a well-maintained grandstand, but the “chicken bog” was a filling and unique “signature dish” that will stick with me any time I talk about the track.

I skipped lunch today anticipating @LakeViewDirt’s chicken bog, and damn did it deliver. Going back for seconds pic.twitter.com/HEeswk4eCL

Be it not scheduling support classes or reorganizing schedules to beat cold weather, the reality is the vast majority of LOLMDS programs in 2022 have had early start times for their feature events.

Yes, this has been great for those of us watching on MAVTV Plus and for fans at Golden Isles that came for the headliners. But is this really sustainable? It’s hard to imagine racetracks voluntarily jamming the headlining program through in a quick stretch of 1-2 hours when the weather isn’t a hinderance to fan attendance.

Plus, if the supporting classes continue to get rescheduled all over the place, will the car counts continue to be there? Most fans may come to see the LOLMDS, but 80-plus crate teams generate lots of revenue for promoters.

Bubba Raceway Park definitely benefitted from running no support classes with the LOLMDS on Monday and Tuesday nights. Midweek programs that finish by 10 or so in the evening are optimal for fans having to work the next morning, and it also meant that Tuesday’s track prep disaster that saw the program start two hours late after the surface was overwatered didn’t result in a brutally long evening. Less is more during the week.

Even the bigger tracks aren’t invulnerable. Despite being a longtime established facility hosting races at the top level of dirt racing, it was announced that the I-80 Speedway in Nebraska is currently under contract to be redeveloped following the 2022 season. Regardless of the perceived health of the dirt racing industry, tracks definitely seem to be disappearing faster than they’re being created.

Official statement from Joe & Steve Kosiski on 2022 being the final season for I-80 Speedway. Be sure to mark your calendars for the 12th and Final Silver Dollar Nationals and the final race being Oct 15th along with the rest of the 2022 schedule. https://t.co/zGSjWlfQgF

128 – miles of separation between the Winter Nationals at Bubba Raceway Park and SpaceX’s latest rocket launch, leading to the picture of the 2022 season so far.

Where it Rated (on a scale of one to six cans with one a stinker and a six-pack an instant classic): I’m going to give the midweek a generous five Southern Hops Black Water Porters. Monday’s Lucas Oil show will contend for finish of the year in 2022, and a very pleasant first-time visit to Lake View that put on a clean show that finished before 10 p.m. was a welcome surprise.

Up Next: The Lucas Oil late models continue their Winter Nationals Florida residency with more shows at All-Tech Raceway, while the largest money of the weekend goes on the line with the SCDRA compacts at Screven Motorsports Park’s annual Winter Freeze. Coverage can be found on MAVTV Plus and Flo Racing, respectively.