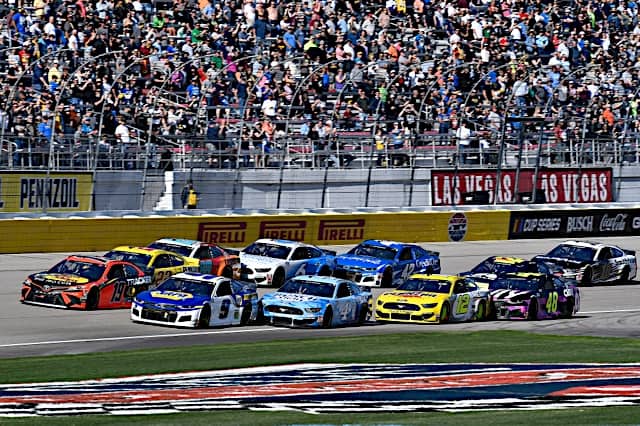 After cut tires, fights and eliminations highlighted the Cup Series’ race last Saturday (Sept. 18) at Bristol Motor Speedway, the field heads west to a (possibly) calmer venue in Las Vegas Motor Speedway on Sunday (Sept. 26) as the playoffs’ Round of 12 begins.

Kyle Larson won the spring race in Sin City and won last week’s playoff event at the Last Great Colosseum, but they were two wildly different races: Vegas in the spring had just six cautions, three for incident (all minor), while Bristol had eight, five for incident (most major). The non-chaos and chaos didn’t impact Larson, who led more than 100 laps in both events en route to the wins.

However, more than 20 entries in the 38-car field failed inspection on the first time through. Larson was included in that selection, but passed on the second try; Byron and Truex, though, will start at the rear of the field alongside Aric Almirola and JJ Yeley.

Looks like 25 of the 38 cars didn’t pass on first try. Not all that surprising for Vegas race. Playoff cars that passed on first try: Blaney, Logano, KyBusch, Elliott. Cars about to go through for second time. If don’t pass on second try, then to the rear for the start of race.

Yeley car failed a third time, passed on fourth time. Will owe a pass through and their car chief, Ty Brazeal has been ejected .. going to the rear: Byron, Truex, Almirola, Yeley. Everyone else passed on first or second time. https://t.co/0k8nPAdMLU

There are seven drivers in the field with wins at Vegas already: Larson, Kyle Busch and Kurt Busch each have one; Keselowski, Harvick and Truex two; and Keselowski leads all active drivers with three wins at the track. The elder Busch won there last year, while Truex is the most recent winner that remains in the playoff field.

After last week’s scuffle between Harvick and Elliott, it doesn’t appear the seas have calmed between the two:

Kevin Harvick says his talk with Chase Elliott last week was like talking to his 9-year-old son, Keelan: pic.twitter.com/5Wj5VDUAMd

As for non-playoff drivers with a chance to spoil things, Matt DiBenedetto finished second in both 2020 visits to Vegas. Chris Buescher has finished in the top 15 each of the past three races as well, while Ross Chastain has an Xfinity Series win there.

Every major series was in action around the globe for NASCAR’s weekend among the casinos, including all three of NASCAR’s primary touring divisions. Christian Eckes scored his first career win in Camping World Truck Series competition on Friday (Sept. 24) night and led a 1-2-3-4 finish for ThorSport Racing.

The following evening, on Saturday (Sept. 25), Josh Berry pulled away in the waning laps to claim his second career Xfinity Series win and second of 2021, leading a 1-2-3 result for JR Motorsports. Both fall Las Vegas events so far have been won by part-time drivers.

Nearly 7,000 miles away in Sochi, Russia, Lewis Hamilton won the 100th race of his Formula 1 career at the Sochi Autodrom, passing first-time polesitter Lando Norris with two laps left to take the lead. Max Verstappen rebounded from a 20th-place starting spot to finish second, while Carlos Sainz rounded out the podium.

At the Grand Prix of Long Beach, just a bit closer to Las Vegas than Sochi, the NTT IndyCar Series decided their championship on the streets of California.

Points leader Alex Palou entered with Pato O’Ward and Josef Newgarden, respectively second and third in points, on his tail. The latter pair still had a mathematical chance of winning the title, though for both it was a long shot.

A lap 1 spin for O’Ward and mechanical issues put an end to his title hopes, while Palou’s fourth-place drive was enough to negate any chance of Newgarden winning his third championship. Palou claimed the crown in just his second season of competition, capping a year in which he scored podium finishes in half of the 16 races, and became the first Spanish driver to win the championship in series history.

The Cup Series gets underway to finish off the weekend at 7 p.m. on NBC Sports Network.