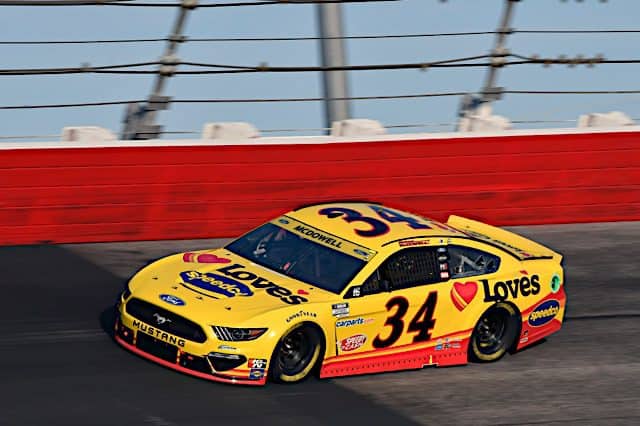 It didn’t take long for the “Lady in Black,” Darlington Raceway, to claim her first NASCAR Cup Series playoff victim.

Just 31 laps into the Cook Out Southern 500 on Sunday (Sept. 5), Michael McDowell‘s No. 34 got out of shape in turn 2, smacked the outside wall and hurtled toward the inside barrier. A long slide and rough impact later, the 2021 Daytona 500 winner’s first career playoff race was over.

McDowell was running 16th at the time.

“Just really unfortunate,” McDowell said after he was checked and released from the infield care center. “I hate it for everybody at Front Row. It’s not the way we wanted to start our playoffs. I’m not really sure exactly how it happened, the [No.] 43 was falling back pretty quick there. Kinda split him and got underneath that new patch [of repaved asphalt] and got loose and got into the wall.

“We had a pretty fast [car], we were up there in the top 10, felt like our car was pretty good. Not the way we wanted to start the playoffs, but we know what we gotta do now moving forward, we got to go win a race. So it’s unfortunate, but we’ll rebound, we’ll keep fighting hard. That’s what we do.”

The inauspicious start to the postseason follows the best regular season of the 36-year-old Arizona native’s career: one win alongside two top-five and five top-10 finishes.

Several playoff drivers had already suffered issues as well, with Alex Bowman getting into the outside wall early and suffering subsequent contact with Hendrick Motorsports teammate William Byron.

McDowell was the first car officially out and will finish dead last, in 37th. He’ll look to rebound next Saturday (Sept. 5) at Richmond Raceway and the following week at Bristol Motor Speedway to close out the Round of 16.