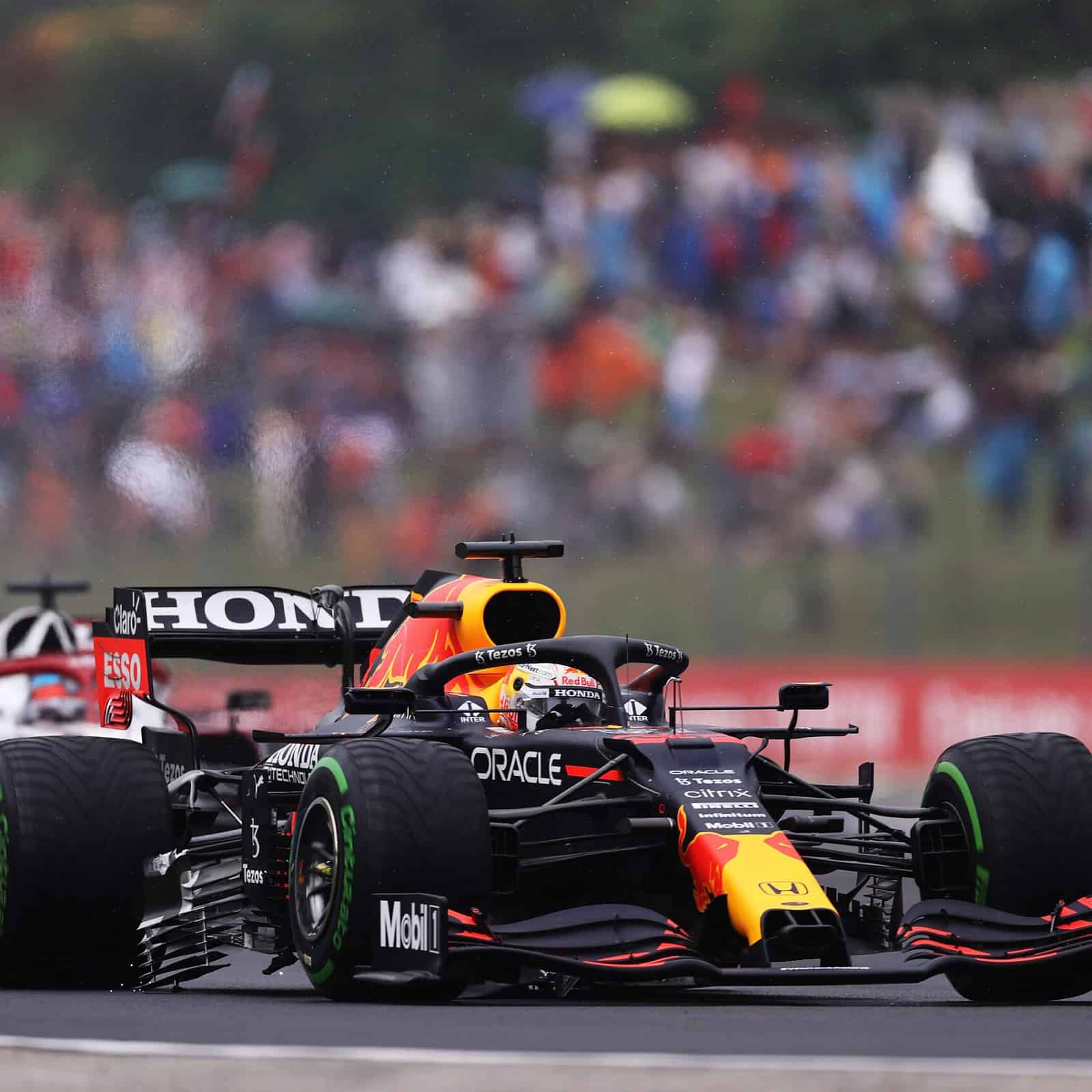 BUDAPEST, HUNGARY - AUGUST 01: Max Verstappen of the Netherlands driving the (33) Red Bull Racing RB16B Honda with a broken bargeboard during the F1 Grand Prix of Hungary at Hungaroring on August 01, 2021 in Budapest, Hungary. (Photo by Lars Baron/Getty Images) // Getty Images / Red Bull Content Pool // SI202108010407 // Usage for editorial use only //

The Formula 1 show is on hiatus for the next few weeks, taking the customary summer break and allowing all the drivers time to flock to their yachts and relax. The series has raced 11 times thus far, and Lewis Hamilton has managed to find himself atop the standings once again, even if he is not driving the best car on the grid.

In the same fashion, Mercedes, after falling behind Red Bull, is up on their rivals and positioning themselves for a grueling run to claim their eighth-straight constructor’s title. The rivalry between the two teams is becoming must-see theatre, with the two teams feeling the pressures of leading the way.

When the series resumes, a grueling schedule awaits. The teams will endure 12 race weekends within a 15-week span. Never mind that one of the races has yet even to be scheduled — an open weekend arising from Australia’s cancellation — as that does not mean that a race won’t be held, rather that no one quite knows where yet.

After Esteban Ocon’s thrilling and surprising victory at the Hungaroring, it is time to take stock of the teams and drivers. As many are likely to be found in the tropical waters somewhere, let’s see who may find things more difficult to navigate and who is enjoying a calm journey.

Max Verstappen was putting together a dominant year and eclipsing Hamilton, appearing at ease in his frontrunner position. Everything looked to be in place for him to distance himself as the leader and to rip off a string of wins.

Then he and Hamilton tangled on the first lap at the British Grand Prix. Verstappen wrecked out. Made a visit to the hospital, received clearance and began griping straight away. But still, he held the points lead and was the pilot of the fastest car on the grid.

But Mercedes and Hamilton came back strong. Hamilton took the pole in Hungary and Mercedes locked out the front row. When Valtteri Bottas botched his start, he took out one Red Bull and injured the other, with Verstappen limping home to ninth.

The upshot for Verstappen is that Hamilton did not win and settled for second. However, going into the break with a DNF and ninth-place finish is a disturbing two-race stretch after winning three races in a row.

Hamilton is a seven-time champ and 99-times race winner. Not to overstate things, but he’s pretty good. He has basically willed himself and his team back to the lead.

While Verstappen, Christian Horner, Helmut Marko of Red Bull, and Toto Wolff or Mercedes all lobbing salvos toward each other, Hamilton has stayed out of the fray.

Hamilton has become the racing equivalent of someone setting off the explosion and casually walking away.

Being able to walk away from an explosion with minor injuries #ThatHappensOnlyInMovies pic.twitter.com/IXg5uM2jA5

There’s no reason to believe that Hamilton will not continue his momentum. Statistically, he is every bit as good in the second half of the season as he is in the first.

Sebastian Vettel and Aston-Martin were beautifully positioned to score a haul of points at the Hungarian GP only to be felled by a fuel issue that turned the result into a disqualification.

Had Vettel earned the points, A-M would sit 2 points behind Alpha Tauri. Instead, the team earned nothing from the trip to Hungary, especially after Lance Stroll crashed out on turn one and earned himself a five-place grid penalty for his effort.

That the team has earned a points result just twice (both for eighth-place finishes) from a potential of eight possibilities in the past four races indicates an alarming trend. Maybe the break will do the team well and everyone can get their heads straight.

Williams, on the other hand, just bounced themselves out of the cellar. Scoring points from the back of the grid is difficult and rare, making the double points finish at Hungary an enormous boon for the team.

They now sit eighth on the table, and there is reason to believe they will be able to hold that position for the remainder of the season, looking stronger than Alfa Romeo and with Haas throwing aside 2021.

That the team stated recently that it no longer needs pay drivers, meaning that it is on better financial footing, is an advertisement of a team finding stability and improved performance.

Williams is not the only team enjoying a rise through the ranks. With Esteban Ocon’s win, Alpine jumped ahead of Alpha Tauri and into fifth. During the first four races of the season, the team looked to be in disarray, with Fernando Alonso’s results being the only thing keeping Alpine from finding the bottom of the standings.

But the car is looking improved while Ocon and Alonso seem to be gelling. They might not catch McLaren or Ferrari but they might be able to apply some pressure on them when everyone returns.

Valtteri Bottas started the season poorly, got his act together and became a wonderful teammate to Hamilton, and then threw away all the goodwill with his ill-fated braking at turn one of the Hungaroring. Had he managed a better start, just kept his wheels clean, or even just cruised around the track, he likely would have earned a spot in the top 10.

By taking himself out, he gave another example of one of his brain-glitch moments. And he did so at a terrible time.

With Toto Wolff and company determining whether Bottas will continue with the team next year or George Russell will take his seat, moments like these are the ones that make it difficult to keep the Finn around. Should he go, he will find a ride at Alfa Romeo or Williams, but it won’t be smooth sailing at either of those organizations as he goes from frontrunner to backmarker.