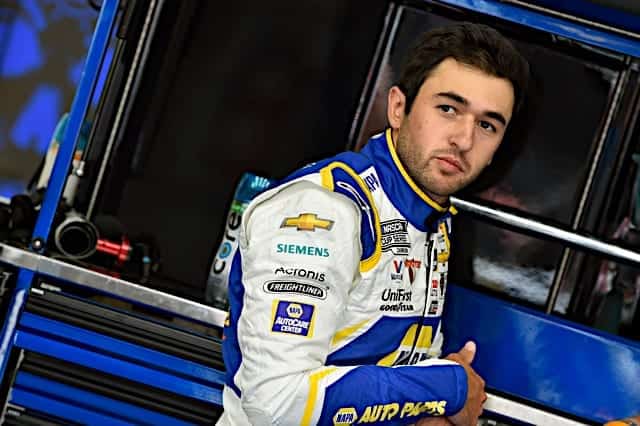 After taking two weeks off for the Olympics, the NASCAR Cup Series returns to racing this weekend at Watkins Glen International. Let’s prep your daily fantasy NASCAR DraftKings lineups for Sunday’s (Aug. 8) 2021 Go Bowling at the Glen, airing at 3 p.m. ET on NBC Sports Network.

Watkins Glen is one of my favorite racetracks and I’m glad it’s returned to the schedule after the COVID-19 pandemic forced its cancellation last season. It’s a 2.45-mile course with seven turns and an inner loop, also known as the Bus Stop. This layout is actually shorter than the one that includes the boot between turns 5 and 6, allowing for a longer straightaway before a left-hander.

Like most road course races, there are not a whole lot of laps run at WGI — just 90 scheduled — so you won’t get as many fantasy points for fastest laps and laps led. Still, those bonuses could help you win your DraftKings contests, especially if the main dominator wins the race. However, with this track type, position differential points become more important, as these will set your lineup apart from much of the field.

For example, DraftKings knows Kyle Busch is starting 20th and is a perennial road course contender, so he’s the most expensive driver. You will probably want to decide whether you can afford both him and Chase Elliott, if it will be worth the lost talent further down the roster or if you’d rather keep them in separate lineups. If you decide to stick with just Kyle Busch, perhaps consider having another driver who can lead laps on road courses that isn’t quite as costly as Busch, so you can target most of the mid-range racers (around $7,000-$9,000).

Before I share my picks for Watkins Glen, I’ll review what happened at New Hampshire Motor Speedway.

It seemed that Mother Nature went after most of the Joe Gibbs Racing Toyotas, as a bit of rain at the start ruined Kyle Busch’s day. I thought Martin Truex Jr. was out of luck as well, considering all the damage he incurred from hitting the wall, but the No. 19 Toyota driver recovered to end in 12th. Unfortunately, Bubba Wallace also struggled much of the race and didn’t finish as well as I had hoped, setting this lineup back considerably. It wouldn’t have hurt to have had Aric Almirola in his place, as the Stewart-Haas Racing driver won the race and scored 82.15 fantasy points.

I think it’s obvious at this point Elliott is essential in most DraftKings lineups at road courses. No one else is even close to him statistically in the last 10 road course events. He’s won six of the last 10 races on this track type, including four straight from 2019-2020. Elliott’s especially good at WGI, where he led all but 10 circuits en route to the win in 2019. Elliott also took the checkered flag in 2018 after leading 52 laps.

This season, the No. 9 Hendrick Motorsports driver led 44 laps at the Daytona International Speedway road course before a caution for rain dampened his chances of victory. Ironically, rain helped him win at Circuit of the Americas, as he would have had to pit if the caution didn’t come out near the end of the race. Elliott also conquered Road America and brought home a runner-up result at Sonoma Raceway.

An 11th-place starting position shouldn’t hurt Elliott too much, providing he keeps his nose clean and passes cars early. Don’t be afraid of the price because if he wins, he might score the most DraftKings points, depending on how many laps he leads.

Truex hasn’t been quite as dominant on the road courses like Elliott, but he has a couple of recent victories, at Sonoma in 2019 and Watkins Glen in 2017. He led 59 circuits in the former event and 24 in the latter. Plus, Truex finished second to Elliott in the past two WGI races (2018-19).

Though the No. 19 JGR pilot hasn’t had the same kind of performances at road courses so far this year, he did finish third at Sonoma and ninth at Road America. Truex could have had a top 10 at the beginning of the year at Daytona but ended up losing some positions in the third stage, especially when the field bunched up for a late restart. Rain also ruined his afternoon at COTA, where Truex was involved in a terrifying crash. Thankfully, the weather doesn’t appear to be a factor this weekend in New York.

When I formed this lineup, I had a couple of drivers I considered playing instead of Truex and Ryan Preece: Christopher Bell and Michael McDowell. Ultimately, Truex’s history at WGI was more appealing than McDowell’s.

Briscoe has yet to run this course in the Cup Series, but that doesn’t mean he won’t do well. The rookie’s won a couple of road course events during his Xfinity Series tenure, including the Charlotte Motor Speedway ROVAL in 2018 and the inaugural Indianapolis Motor Speedway Grand Prix last season. Also, at Watkins Glen in 2019, he finished where he started the NXS race in sixth place.

The No. 14 Stewart-Haas Racing driver has struggled in his debut Cup season and has just two top-10 finishes so far. Fortunately, those were at road courses; he was sixth at both COTA and Road America after starting 27th and 35th, respectively. While Briscoe was 11th at Talladega Superspeedway and Darlington Raceway, he seems more comfortable on the road courses above all else.

Could Briscoe sneak in a win here or next week at the Indy road course? Perhaps, but what you really need from him on DraftKings is a good finish, as he’s starting 27th Sunday.

Chastain has had some good results at most of the road courses so far this year. He was fourth at COTA after qualifying 20th and led four laps in wet weather. Then, at Sonoma, he began 29th and finished seventh, duplicating that performance at Road America.

He also was seventh at Road America in 2018 for JD Motorsports and 2020 for Kaulig Racing in NXS. Chastain never raced with Kaulig at WGI, though, and struggled there with the underfunded JDM team. Still, he earned 14th place in 2016 at Watkins Glen.

This week, the No. 42 Chip Ganassi Racing driver made headlines when Trackhouse Racing Team announced it signed Chastain to a multi-year contract starting next season. With his Cup future secure, Chastain can now focus on rallying to another top 10 on Sunday.

Jones has been really good at WGI, earning fourth place in 2019 and fifth in 2018. Additionally, he was eighth at Sonoma in 2019 and third at the Charlotte ROVAL last season. However, those were when he drove for JGR, which provides top-tier equipment for road courses.

Since switching to Richard Petty Motorsports this year, Jones drove the No. 43 to top-20 finishes at road courses, ranging from an 11th at Sonoma to a 19th at Road America. He might not get a top 10 this weekend but should still gain some positions from 22nd, especially if those in front of him have trouble.

Preece has only run one time at Watkins Glen, and it didn’t end well for him. So why is he here? Well, as I mentioned earlier, I wanted Truex with Elliott and the others I selected, so I was left with very little salary remaining. Hopefully, Preece’s engine doesn’t blow again like it did at Road America last month.

On the bright side, the No. 37 JTG Daugherty Racing wheelman does have a few road course results where he ended further up than where he began. In last year’s race at the Charlotte ROVAL, Preece began 18th and finished 14th. In 2021, he was ninth at the Daytona road course after starting sixth and ran 15th at COTA after qualifying 36th.

Preece is starting 23rd this week and there are some drivers behind him that could pass by. That means he’ll likely need someone in front of him to get off track or lose the fuel strategy game in order to get a top 15.

I think if your playing the Slingshot game you have overlooked 2 really good driver starting way back .The Busch brothers.

They definitely are in my player pool as well.