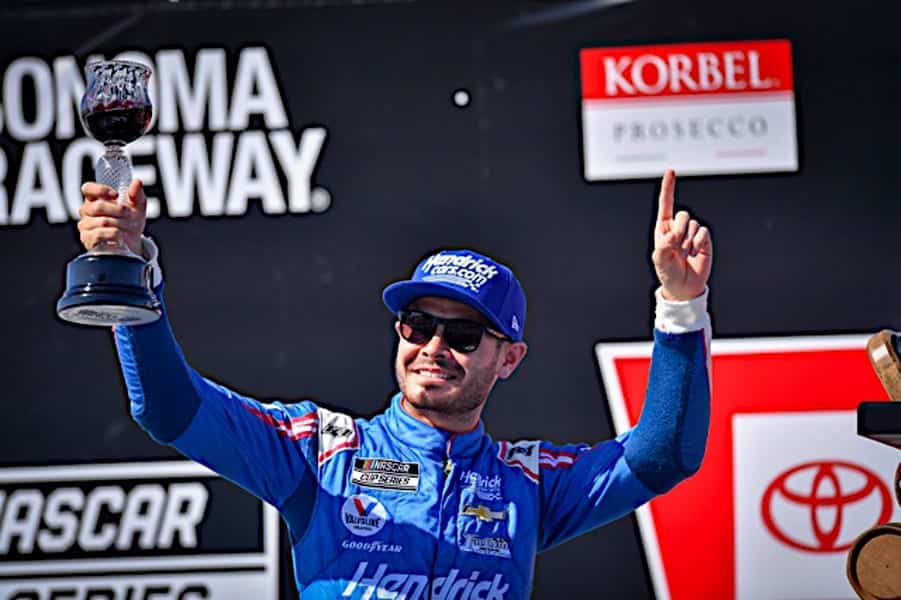 Who … should you be talking about after the Toyota/Save Mart 350?

Is Kyle Larson finally living up to his potential? He’s always had the talent to win but has struggled to close. For the second week in a row, Larson left no doubt whether he could finish out races, dominating the Toyota/Save Mart 350 to the tune of 57 laps led. 2021 is only the second time Larson has won more than one race in a season; he snagged four victories in 2017. He’s on pace for a career high in that category and has played a key role in taking Hendrick Motorsports back to the top of the NASCAR Cup Series mountain.

Honorable Mention: Front Row Motorsports doesn’t often get to share that mountaintop with the likes of Hendrick or Joe Gibbs Racing, but for much of the day Sunday (June 6), the underfunded two-car team hung with the big dogs. Both Michael McDowell, who’s gained a reputation as a solid road racer, and Anthony Alfredo, who has struggled to gain a foothold in the Cup Series with little experience, ran inside the top 10 late in the race. Neither driver’s finish reflected their performance, as both were spun in the final laps (McDowell finished 28th and Alfredo 31st), but they certainly let people know they were there and got FRM some airtime, proving their value to sponsors when given somewhat equal footing.

Stage racing had everyone talking this week, and it’s worth a discussion, but especially on road courses.

While it’s just a mildly inconvenient gimmick everywhere else, stages ruin the unique strategy of road racing. Pit timing on road courses was once everything, and it was completely different from ovals, where teams plan their pit windows from start to finish.

On road courses, without those breaks, teams would work backward, timing stops from the end of the race. It made for some interesting strategy and added an air of unpredictability. Teams still do it that way, but there’s considerably less mystery in road racing now.

Stage racing is, frankly, one of the least offensive gimmicks NASCAR has instituted over the last 20 years or so, but it could be revamped for road racing with better results. The solution is as easy as awarding stage points without throwing the yellow flag. It’s not like the networks have cut late-race commercials like they said they would when the stages started, so there’s no reason for the caution.  Just keep it green and let it play out.

See also
Up to Speed: Time for NASCAR to Rethink Stage Racing

Where … did the other key players wind up in the Toyota/Save Mart 350?

Road warrior Chase Elliott has yet to find victory lane at Sonoma Raceway. He got close on Sunday but fell just shy of his teammate. Elliott held off a charging Martin Truex Jr. to finish second, his career-best run to date at Sonoma.

Point leader Denny Hamlin wasn’t really a contender to win, but he showed everyone why he’s the point leader by running a strong, consistent race and finishing seventh. Despite Larson’s three wins, Hamlin still holds a 47-point advantage over Larson as NASCAR heads into the All-Star break.

Chip Ganassi Racing, which struggled at Charlotte Motor Speedway, showed some muscle at Sonoma. Kurt Busch, who needs every point he can get to make a playoff run, scored points in the first two stages. He backed that up by leading eight laps and finishing sixth, his best result since a fourth at the Daytona International Speedway road course. Meanwhile, Ross Chastain survived a late-race pileup to finish seventh behind his teammate. CGR has the talent behind the wheel, and if it can find consistency, the organization still has a shot at getting a playoff spot one way or another.

When … was the moment of truth in the Toyota/Save Mart 350?

Larson might never have been happier to have Elliott as a teammate than on the last restart. Elliott poured on the pressure, but when he had the chance to move Larson via his bumper, Elliott cut his teammate a break, one he might not have given anyone else.

Elliott drew some criticism for not being more aggressive. I disagree. In the long run, it was the right move for the reigning Cup champion going for back-to-back titles.

Not only are Elliott and Larson teammates who are expected to share information and work together, but the playoffs are already on the horizon, and drivers remember who cuts them some slack. Turning Larson might have given Elliott a win … and it would also all but guarantee he’s not getting that break when he needs it. In fact, he could even find himself in the wall at a critical juncture. Sometimes, knowing when not to be aggressive is as important as getting a position on track.

See also
Up to Speed: Will a Teammate Battle Decide the 2021 NASCAR Championship?

The Cup Series heads to the All-Star event at Texas Motor Speedway this Sunday, welcomed with open arms with a million dollars on the line for the winner.

But is the race still relevant? While a new location and format might provide a little spice, to the teams that qualify, a million dollars simply isn’t incentive enough to change the way they race or to conjure the extra aggression to go for the lead every lap. For the other teams, Texas is a long way to haul a car for a non-points event with no guarantee (and for some, little chance) of making the big show.

There are a few format changes still on the table for the future, and NASCAR would do well to include the Camping World Truck and Xfinity series champions if they can find a ride. Unfortunately, the race has been on life support for a while now, and it might be too little, too late to bring back what was once labeled as One Hot Night.

How … come road courses are important?

NASCAR put more emphasis on the right-hand turns this year, with seven points-paying road course races on the docket, including the Charlotte Motor Speedway ROVAL in the playoffs.

That makes them a bigger factor in determining the champion than ever before. In years past, when there were just two, and none in the playoffs, road courses could be approached as races that the top contenders merely had to survive. The addition of Charlotte to the playoffs meant they now have to look at them as a place to thrive.

Road racing, like short-track strength or superspeedway prowess, is a skill some drivers master more than others. Adding one in the playoffs, more reflective of the schedule, was absolutely the right call.

The other thing that sets road courses apart is, like the three short tracks currently on the Cup schedule, they are all vastly different from one another. The same can’t be said for 1.5-mile ovals that pepper the landscape; replacing a couple of those with unique tracks was a good move.

While seven is the maximum NASCAR should consider, they’re worth having. Different faces appear in the top 10.  That’s good for the sport. Drivers have to learn different braking points in 10-plus turns and set up passes in specific spots from multiple corners ahead of those spots. It’s difficult and unpredictable.  What’s not to like?

Drivers are also aware of the meeting they will likely have with the boss if they do something stupid and cost the bosses team a win. That is a powerful motivation than the playoffs which are months away.

Personally, I always found the competitive, even confrontational, attitude of JGR drivers more to my liking than the faux “we are a team” approach of HMS. With all 4 drivers in the Playoffs, I just wonder how long it will be until the gloves come off. Kyle Larson seems to have no problem pushing his teammates out of the way, but how long will it be until one or more of them start to push back?

Maybe after Larson snags a sponsor, the order to “back off” will be lifted. I look forward to that.