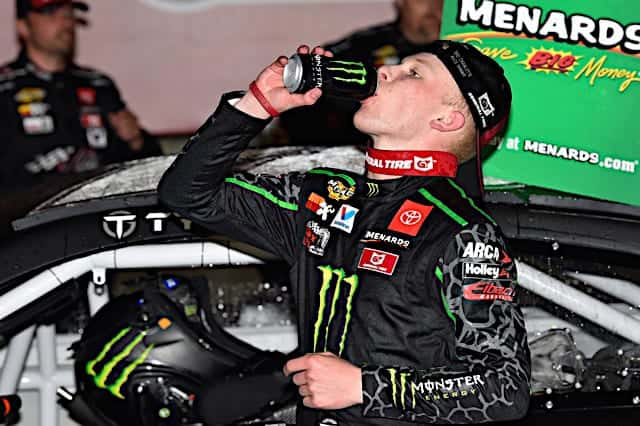 Saturday (May 29) was all about Ty Gibbs. Hours after claiming his second win in the NASCAR Xfinity Series, Gibbs dominated the ARCA Menards Series race from the pole to win the General Tire 150 at Charlotte Motor Speedway to complete a day of perfection for the grandson of team owner Joe Gibbs.

It is his fourth ARCA win this year and the 12th of his career. Gibbs now has won three straight main ARCA races, a feat last accomplished by Sam Mayer in 2020.

“What a helluva day right there,” Gibbs told FS1 in victory lane. “I can’t thank everyone enough. I guess we got to bring out the broom; that’s two in one day. That was awesome. I can’t thank my guys enough for all their hard work. I got some awesome fans right here. I’m just excited! I might drive this thing home to take a nap.”

After completing 200 laps in the Xfinity Series race, Gibbs hopped into his No. 18 Joe Gibbs Racing Toyota for this 100 lap ARCA race. What was his secret?

“The Monster Energy got me focused and I was all wired up for the race,” he said. “Luckily we ended up back here.”

"I guess we gotta bring out the broom now." – @TyGibbs_ pic.twitter.com/Fuda5sbsBk

Gibbs is on a torrid pace. He has four main ARCA wins this year, won the ARCA Menards Series West season-opening combination race with the main series at Phoenix Raceway, and even led every lap en route to winning the most recent ARCA Menards Series East race at Dover International Speedway.

In 12 combined starts across the ARCA series and the Xfinity Series, Gibbs has eight wins and 10 top-10 finishes. His two finishes outside the top 10 were the 18th-place finish in the Xfinity Series race at Darlington Raceway and a career-worst 27th place finish due to a wreck at Talladega Superspeedway.

“I really don’t think have confidence boosters in life,” Gibbs said in an ARCA post-race Zoom call. “I feel like in my racing life, I feel like I keep a straight line and try to go win every weekend. I feel like that’s the same thing that’s helped me in the Xfinity races. And just keeping pushing forward, not trying to stress myself out. I feel like we’ve had some real momentum since we got wrecked at Talladega Superspeedway. I feel like if we keep doing our thing, we’ll be there in no time.”

He has led 490 laps in the ARCA series and 63 in the Xfinity Series. All this, and Gibbs is only 18 years old.

After taking tires during the final caution period with less than 10 laps to go, the Venturini Motorsports trio of Corey Heim, Drew Dollar, and Parker Chase finished second through fourth, respectively. Heim in particular solidly rebounded after starting ninth and struggling to find speed in his No. 20 Toyota.

“I was really disappointed with our speed and overall handling of our car,” Heim told FS1 post-race. “It’s pretty unbelievable how we finished honestly just for awful we were in practice and the test too. In hindsight, I think we needed to bring a different car. We had some issues at Kansas as well.”

Although he ran most of the race in second place, rookie Nick Sanchez finished fifth in his 10th career start.

“Honestly, I thought we were going to be good there,” Sanchez told FS1. “I think we had a left rear going down that last lap. I really felt the rear end wiggle. I think we had a pretty good gap between them to manage it. Got caught by new tires, nothing you could do.”

While Gibbs won again, the race at the 1.5-mile track in Concord, North Carolina was not without incident.

Thad Moffitt went for a spin after racing underneath Greg Van Alst.

Finally, with less than 10 to go, Jason Miles spun, bringing out the final caution of the race.

Jason Miles goes for a spin coming off Turn 2

While Sanchez battled hard and the Venturini trio used their fresh tires to quickly grab positions, Gibbs won by 1.204 seconds ahead of Heim.

Young Mr. Gibbs continues to impress! I’ve been a fan of his Grandfather since his NFL days (I lived in the Washington DC area back then) and naturally gravitated towards the Redskins. I suspect he will be driving a Cup car before he is 21 years old, and successfully. Nice to see some youngsters moving up through the NASCAR ranks!

What would anyone expect considering the wealth and power of the Gibbs organization? It’s easy to enjoy a win but his true character has been displayed in the past year with his losses. I guess somebody spanked his naughty bottom.

Tom B
Reply to  Steven

Driving for the Joe Gibbs organization doesn’t make you a winner, i.e. JJ Yeley Fed Ex #11 and Elliot Sadler OneMain #11.
I don’t care for Ty Gibbs, but that is how you act when you are entitled, young and a winner.