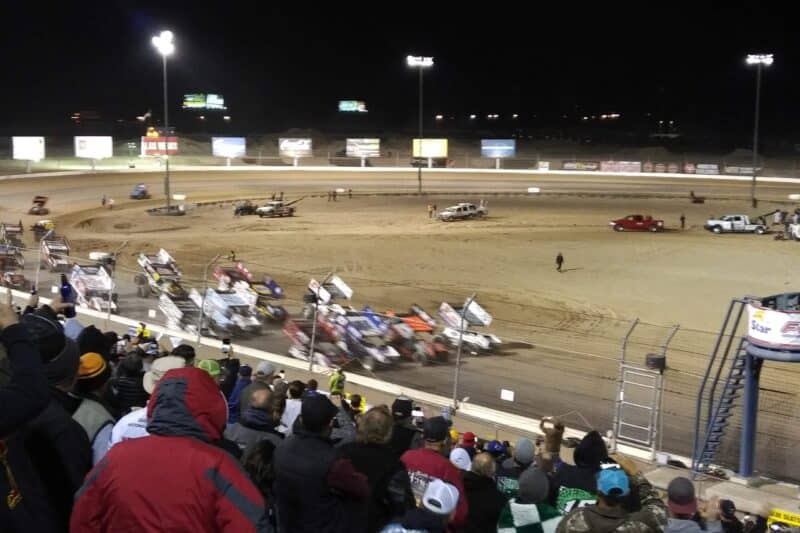 One of the perks of the spring and summer dirt racing season is that there’s events nearly every night of the week. Having the World of Outlaws to enjoy from Bridgeport Motorsports Park on Tuesday night (May 18) as I did my evening workout and paid bills was a welcome treat, even if the feature proved a bit predictable after Brock Zearfoss’s (latest) flip.

The damage to Zearfoss’ #3Z. Both drivers are okay, but done for the night. pic.twitter.com/QNq2ixV9yS

Watching Tuesday night’s feature program, I couldn’t help but think of how perfectly made for TV such an event could be. Even as run, Tuesday’s program was very efficient. Two classes were on premises, and even with a red-flag during the sprint car feature and a brief interlude with the water truck, the Outlaws went from hot laps to A-main checkers in around three hours.

The main event being done at 10 p.m. is admirable, because it means for fans opting to make the trip or tune into a broadcast/stream that going to work the next morning isn’t going to be a problem.

But let’s get ruthlessly efficient for a minute here. (And no, I don’t just mean putting starters on sprint cars to avoid wasting time and effort with push trucks. But we should do that.)

Imagine if this program had been sprint cars only, and had started 90 minutes later in the evening as a result. Less sunlight on the track as cars run prelims is good news from a maintenance perspective. A 7:30 or 8 p.m. start with one class of cars to run is still the same type of time commitment for fans in the middle of a workweek as was Tuesday’s show at Bridgeport, which saw hot laps go green at 6:30.

Go down from two classes to one, and the time to run a program goes down from three hours to two. NASCAR wishes it had racing that broadcast-friendly, and the current WoO format of qualifying, heat races, dashes and feature means that competition not edited for TV or watered down for shrinking attention spans would still be able to fit into an advertising-friendly window.

It’d be the best of both worlds. A short burst of real racing without gimmicks or naps, and on a weeknight no less.

Now look, I’m not kidding myself that any actual TV networks are about to make Thursday Night Thunder return in a live format. If I’ve learned anything during my five months on the dirt beat for Frontstretch, it’s that a) asphalt fans by and large care as little about dirt racing as vice versa and b) dirt racing doesn’t give a damn that it’s by and large stuck in the early 2000s when it comes to presence online or on social media. I can’t count on my fingers, toes, and hairs on my head (and at 35 I still have a bunch) the number of dirt tracks across this country that can’t keep a schedule updated on Facebook, maintain a Twitter feed or post a payout list on a Geocities website.

But even if that’s not a realistic short-term outlook, it would behoove dirt racing to start thinking about scheduling and staging TV-friendly programs, especially at the upper levels of the sport. There’s several reasons to be forward thinking is this regard.

For one, dirt tracks are proving very capable of putting butts in the seats for weeknight specials. The crowd at Bridgeport for Tuesday night’s WoO show was standing room only, without exaggeration.

4th running Freddie Rahmer into the wall and spun backwards on that white flag lap of Heat One. pic.twitter.com/eiyr6RBiFX

Rewind a couple weeks back, and the same WoO sprint cars sold out the Jacksonville Speedway in Illinois on a Thursday night, even without having a single local support class running as part of the program.

Full grandstands means growth has to come from somewhere else. Dirt racing is just like any other form of sport, there’s only so many grandstands that can be built before outside viewers have to come into play.

What’s more though, in the case of the upper levels of dirt racing, thinking about how to grow viewership of their events away from the grandstands is of paramount importance. Namely, because the larger the purse gets, the smaller the margin to profitability gets for dirt track promoters. In some case promoters will go as far as to take a loss hosting a touring series event, hoping that the experience will hook fans to come back for the weekly pure stock feature.

But this past weekend, which saw both the Lucas Oil Late Model Dirt Series and the Crate Racin’ USA Series cancel major events across the South because of a fuel crisis that proved to have no impact on dirt racers (just look at how Jimmy Owens and a bunch of LOLMDS regulars were able to race across the commonwealth of Virginia without issue) demonstrates just how much benefit planning programs with viewership in mind could have.

I don’t fault track promoters of major-paying events one bit for canceling early out of caution. The last thing I’d ever want to see is a promoter paying $15,000-to-win and have only 10 super lates show up. But it’s damn frustrating both as a fan and even as a writer to see often the biggest events of a weekend be the first to disappear. Pursuing more income that, if negotiated properly, is fixed in advance of a program going off, will go a long way to stabilize scheduled events.

With the nation returning to normal far quicker than many, including this writer, expected, dirt racing promoters are riding a wave of momentum that is seeing grandstands packed to capacity. The butts are in the seats. The next steps forward have to come from somewhere else.

That the sport has gotten so deeply intertwined with live streaming is an absolute blessing. That the sport is now in the the thrust of a schedule that offers live content six to seven nights a week is a blessing. Should a TV network (or much more likely, a streaming provider that’s not solely focused on dirt racing) ever come calling, having programs that are efficient while packing a racing wallop is a recipe for success waiting in the wings.

Sometimes less is more. Especially on a weeknight.