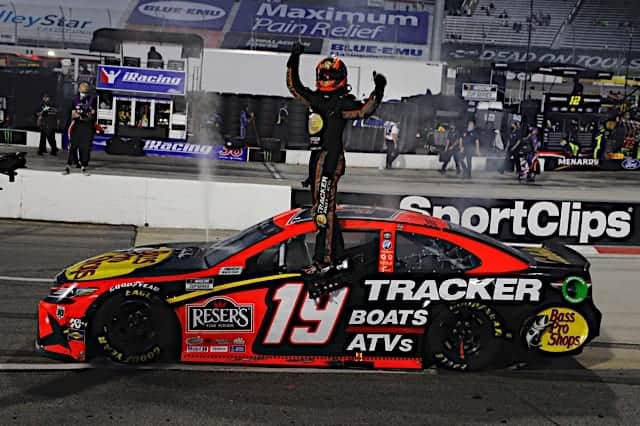 The streak of different winners to start 2021 came to an end Sunday at Martinsville Speedway when Martin Truex Jr. took the checkered flag for the second time this season in the rain-delayed Blue Emu 500. Truex didn’t dominate, didn’t even have the best car for most of the race, but a long red flag and subsequent transition to nightfall helped the No. 19.

Truex and teammate Denny Hamlin, who did dominate but could not close, waged a door-to-door battle in the closing laps, with Truex having a small advantage getting into the corners and Hamlin having the edge off. In a wild race where many of the contenders suffered damaged cars, Truex was able to stalk the lead and avoid trouble, a winning recipe at Martinsville.

He certainly wasn’t the most talked-about driver during the broadcast, but Tyler Reddick did the talking with his car, driving his way from the back of the pack after inspection issues to finish a hard-fought eighth. Reddick was in the thick of Sunday’s chaos, helping to produce a couple of gasp-worthy moments, but he snaked his way through the worst of the carnage, taking home a respectable top-10 run. Reddick has been a factor in races this year, and he’s looking like he’s going to keep getting better.

With rain putting a damper on both the Xfinity and Cup series, it set up a Sunday doubleheader, thrusting NASCAR’s second series into the spotlight. That race featured some bold moves of its own, and in the end, short-track ace Josh Berry, in a part-time ride for JR Motorsports, used his experience winning at Martinsville in a late model to beat the field.

Berry was hand-picked by Dale Earnhardt Jr. to drive his late model and a handful of Xfinity races, but he got to victory lane the old-fashioned way, grinding away at short tracks in small-town America until Earnhardt saw something in him. He doesn’t bring cartloads of family money or a portfolio of sponsors with him the way many drivers do now.

Earnhardt said after the race that he was more emotional over Berry’s win than he had been when he was racing himself, and he didn’t know why. Both Earnhardt and Berry earned that emotion. A throwback to the days when sponsors came to teams with talented drivers and when drivers proved themselves outside NASCAR’s spotlight, it was the kind of win that resonates beyond just a driver hoisting his first trophy.

It’s the NASCAR version of the American dream, and it’s a dying breed.

Polesitter Joey Logano was almost a factor Sunday, but not in the way he wanted to be. Logano led just six laps, and while he had a solid top-10 car, he didn’t have a winner this week. Logano’s biggest moment of the day might have been a near-miss when he tangled with Truex, nearly sending the No. 19 around. Logano wisely backed off at that point, and order — and his race — were restored. Logano finished sixth, and his consistency is paying off as he leaves Martinsville third in points.

Most recent Martinsville winner Chase Elliott has struggled to start his 2020 title defense, but he found his mojo on Sunday, racing inside the top 10 for most of the day and avoiding the chaos that took place. He was able to take advantage of the final run of the day, taking advantage of his final stop and racing to second on the night.

Active Martinsville win leader Hamlin could taste the champagne, leading as the laps ticked away, but his car wanted to fade on longer runs. And the final run of the day was just long enough that the No. 11 couldn’t hang on out front. Hamlin waged an epic fight to hang on for the win, but Truex was able to get by and then Elliott got around the vanquished Hamlin as well, leaving Hamlin with a third-place finish after leading a total of 276 laps on the day. He doesn’t leave Martinsville with a win, but he does leave with the point lead.

One thing about Martinsville, there’s never a lack of action. You might not see the shoving and retaliation of old (at least not all the time), but every lap of every race, someone is trying to make something happen and someone else is trying not to let him. Martinsville offers some of the best pure racing on the Cup circuit.

And sometimes it just gets messy.

That was the case on lap 386 Sunday when a 15-car pileup brought out the red flag while the track was cleared. Chris Buescher got loose racing outside of Kyle Busch, and when the pair spun around coming off of turn 2, the hits just kept on coming as car after car piled in with no time or room to avoid it.

The crash proved to be the end of the line for several of the drivers involved. Ryan Preece and Daniel Suarez both contended with flames (and because Suarez rolled around to the frontstretch before stopping, it took a long time for crews to get to the No. 99. Luckily, Suarez was able to get out on his own. Brad Keselowski and Alex Bowman saw their cars roll away on to trucks, as did Justin Haley. Others were able to continue with varying degrees of damage, including both Buescher and Busch.

The crash didn’t take out any of the race leaders, but it changed up some late strategy and certainly gave fans something to talk about.

The Cup Series heads to Richmond Raceway to conclude the spring short-track run. Truex has become a short-track ace of late, but look for next Sunday to be a barn-burner. It’s the last chance for drivers to bull their way to the front before returning to Talladega Superspeedway and then the aero-dependent Kansas Speedway. It’s also the last chance for drivers to take out their frustrations with the bumper, and while we haven’t seen as much of that in recent years, there’s plenty of frustration that could come to a head.

Next Sunday will also be the first race for Jimmie Johnson fans to glimpse their driver in an NTT IndyCar Series race, which inexplicably is scheduled at the exact same time as the Cup race. That seems like bad planning by both sanctioning bodies because there was a real opportunity for crossover there.

How… much does marketing matter?

Sponsorship is everything in NASCAR. When companies buy space on a race car, they expect to have their company or product on television screens and often on plenty of other products as well. NASCAR fans are notoriously loyal to race car sponsors, even today. And in the last couple of years, another opportunity arose for sponsors: eRacing.

During the shutdown in 2020, what had been a separate entity for race teams became a mainstream one for the actual Cup teams, a nationally televised series of races on the iRacing platform. It meant exposure for sponsors when there would have otherwise been none. And the sponsors, particularly some for drivers who were more competitive than in the actual Cup races, loved it.

So much so, that when it was announced there would be an encore slate of races this year, they banked on it. For driver Timmy Hill, who won virtual Texas Motor Speedway last spring and is an outstanding iRacing driver, there was a deal in the works that would have put sponsorship on Hill’s real-life MBM Motorsports Cup car as well as the virtual one.

Except Hill, despite being a winner in the series, didn’t get to play this year when the rules were changed to include only chartered Cup teams and a few select invitees. He was offered the No. 2 Team Penske car at virtual dirt Bristol when Brad Keselowski declined to participate, but that didn’t allow Hill’s sponsors to replace Keselowski’s.

The non-invite cost Hill’s team the opportunity to race at Martinsville this week and other weeks this year. The impact of a virtual race became very, very real. As a 2020 winner, Hill should have been included in the virtual series on his own merit, and that NASCAR deemed him not worthy is an ugly picture of how smaller teams are perceived by the sanctioning body, even if that’s not the entire reality. A real marketing opportunity for a team that desperately needed it was lost in a virtual race. NASCAR should have immediately included Hill when that came to light. That that didn’t happen is troubling… and not virtually.

Hill deserves to be in IRacing, period. Hasn’t he won like 600 races? For NASCAR to impose the charter system on IRacing is crap and Jim France should step in and give Hill a charter he deserves. Kudos to Keselowski for giving up his spot to allow Hill to race. NASCAR needs to allow MBM in; and soon, or it’s going to have lasting negative reprecussions.