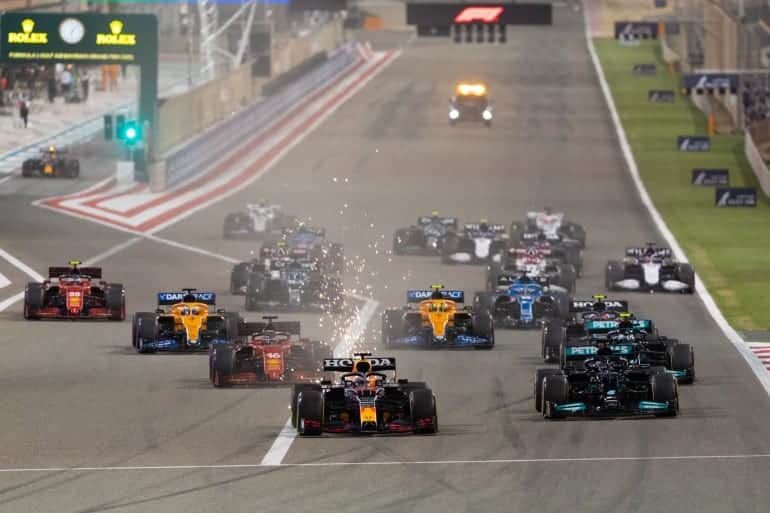 The 2021 Formula 1 season is already being billed as a battle between defending champion Sir Lewis Hamilton and Max Verstappen.  Hamilton, driving for Mercedes, the titan team of the past seven years, and holding seven championships is backed by confidence and his road-tested team.

But Verstappen has been nipping at Hamilton’s heels for the past two years and looks like he has finally been given a car that can both challenge and outperform the Mercedes driver.  After ruling all three practice sessions and blistering Hamilton in qualifying, the race looked to be Verstappen’s to lose.

Mercedes had developed their car for Bahrain so that it was just good enough.  It fell short of scoring the pole and dismissing the field but, as the race wore on, it had just the required speed to stay in touch with Verstappen and his racy Red Bull.  Hence, when Verstappen sped off into the lead and looked like he might cruise to the win, Hamilton was able to stay enough in touch to push Red Bull to cover.

Mercedes pitted Hamilton early and gained the undercut on Verstappen, placing Hamilton out in front but with tires that were 10 laps older on the first stint and 12 laps older on the second.  The job was left to the reigning champion to manage his rubber while fending off all challengers.

Verstappen, after the second round of pit stops, had the advantage with a faster car and fresh tires.  Race analysis indicated that Verstappen would pass Hamilton with around six laps to go.

And then it was five.  Then four.  Finally, Verstappen made the move on Hamilton but did so by going to the outside and passing him with all four wheels off the track.

Forced to concede the position, Verstappen never mustered another challenge to grab the lead.  While the race looks like Verstappen and Red Bull erred, handing the win to Hamilton and Mercedes, such a perspective fails to recognize just what Hamilton accomplished.

His talent is often attributed to the car or the team behind him but this win was all Hamilton’s.  He jokingly described the final laps as horrifying, believing that Verstappen would pass by, but Hamilton used every aspect of his skill to keep the Dutchman at bay.

First day of a new term

– While Red Bull may not have been able to secure the win, the team still earned points from finishing second and fifth.  The second spot may come across as disappointing but Sergio Perez crossing the line in fifth spot is downright amazing.

On the formation lap, his Red Bull sputtered to a stop and created a situation that delayed the start and where the cars circulated again to form up.  Perez rebooted his ride and made his way to pit lane for the start.  Such a position looked to be a sign of trouble.

Instead, with Nikita Mazepin bringing out the safety car on the first lap of green flag racing, and then a virtual safety car coming on once the race restarted, Perez made inroads on the field and stayed in touch.  When Red Bull kept him out longer while teams like Aston Martin, McLaren and Ferrari began pitting, Perez had basically overcut much of the field.

Once he began racing with cars inside the top 10, Perez was able to hold position, even with older tires.  From there, the team used a strategy that showed how strong the pairing might be for the rest of the season.

– If the Bahrain GP is any predictor for 2021, Haas is looking at a rough year.  Nikita Mazepin spun twice during the opening segment of qualifying and started in the rear.  Mick Schumacher kept his car going forward but did little better than his teammate and also started near the end of grid.

In the race, Mazepin again spun out, only one third into the first competitive lap, and crushed his car against the barriers, relegating him to last.  Schumacher managed to pick up a few positions but that is a bit of a trick because he finished ahead of cars that all failed to make the checkers.

There is little to get excited about with Haas this season.  The young driver lineup may bring some excitement, but the cars are underwhelming at best and the team does not appear to be spending big to move up like Williams, another organization who has been hovering at the end of the field.

– Sebastian Vettel had himself a weekend.  With limited preseason testing in his Aston Martin, Vettel took to the track for practices and qualifying with both he and the team looking a little bit lost.  Many teams and drivers have gone through this very same thing only to recover and look like they have a perspective and grip on things.

Vettel, however, continued the disturbing trend that got him banished from Ferrari, which are moments when his brain seems to blip.  His qualifying effort was both curtailed and then penalized when he did not appropriately address the local yellow flags for Mazepin’s spin.  The result was a last-place starting position.

In the race, Vettel appeared to punt Esteban Ocon for no other reason than the fact that Ocon was on the same track as him.  The inappropriate action earned Vettel a 10-second penalty that really amounted to nothing but did point at the fact that something is amiss with the four-time champion.

The switch from Ferrari to Aston Martin was supposed to bring some kind of mental reset for Vettel, but this opening salvo portends that, at this point, he is a troubled and troublesome driver.  No doubt the frustration of driving for underperforming teams is hampering Vettel, but the question is whether or not he will ever adjust.

Lewis Hamilton: “Every minute of the weekend I’ve loved. Knowing as a team that we were behind in performance – these guys [Red Bull] have done a better job so far.

“And so, for us to come away with this result given the fact we weren’t the fastest this weekend is a real result.”

Max Verstappen (after letting Hamilton regain the lead): “It was super hard to follow. I got into turn 13 [on lap 43] and I had a big oversteer. And, from there onwards, I just didn’t have the tires anymore to attack.

“Of course, my tires were like 10 or 11 laps younger. But with these cars, that advantage goes away very quickly once you get within one-and-a-half seconds. And with the wind and the direction it was, it was not helping.”

Fernando Alonso: “We had some brake issues at the end that stopped us seeing the checkered flag. Apparently, some debris came into the brake duct, which is a little bit unfortunate.

“I think the race was fun until that point. The start, the first couple of laps, some battles with my old colleagues, and I did enjoy it. But obviously, now you’re disappointed not to see the checkered flag.”