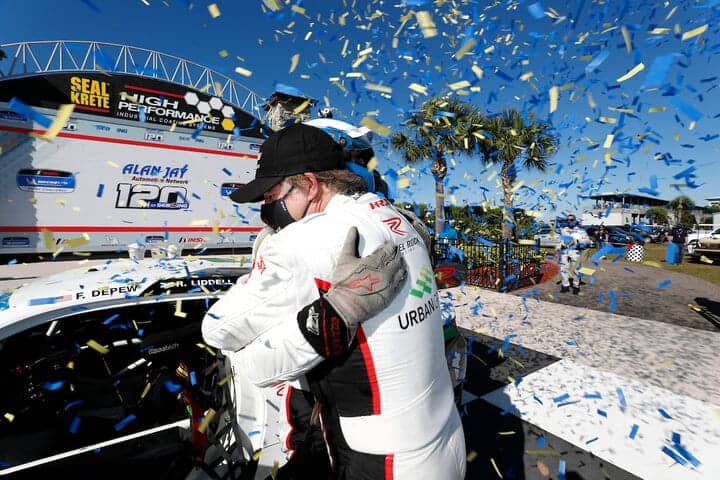 Rebel Rock Racing’s Frank DePew and Robin Liddell gambled on a very aggressive fuel strategy to get the overall lead when Stephen Cameron Racing’s Greg Liefooghe pitted with just over three laps to go.  Despite smoke coming out of the back of the team’s Chevrolet Camaro GT4.R, Liddell was able to hold on to win the Alan Jay Automotive Network 120 Friday afternoon (March 19).

“After my first three laps [in the car], I went into maximum fuel saving,” Liddell said in victory lane after the race.  “I had every confidence in…the Rebel Rock Racing team that we could get to the end.  We obviously had an oil leak over the last two laps with fluids pouring out the back of the car.  Very lucky to take the [checkered flag] in P1.”

Wright Motorsports’ Maxwell Root started from pole in his Porsche and ran well early on.  HTP Winward Motorsport’s Russell Ward swept past outside pole sitter Orey Fidani and took second in his Mercedes.  Turner Motorsport’s Dillon Machavern was close in tow and eventually took second on lap 6.  By that point, Root already had a 3.9-second lead.

Further back, there was a fair amount of contact.  On the opening lap, Motorsports In Action’s Sheena Monk had wheel-to-wheel contact with TeamTGM’s Hugh Plumb.  The contact broke Plumb’s rear suspension, resulting in Plumb crabbing back behind the wall.  He would eventually return to the race, but later retired.  A couple of laps later, Javier Quiros also suffered a suspension failure in his Toyota GR Supra GT4 after he was hit by Alan Brynjolfsson.  Brynjolfsson was given a penalty for avoidable contact while Quiros was done for the day.

Brynjolfsson had qualified third on Thursday, but his time was disallowed after inspectors found an unapproved spring in his Aston Martin.  The penalty (which equated to approximately 33 seconds) stunted a charge towards the front.

Root led until he brought his Porsche into the pits on lap 20, 45 minutes into the race for the team’s first stop.  At that point, Jan Heylen got in the car.  A series of stops resulted in Stephen Cameron Racing’s Sean Quinlan being in the overall lead when PF Racing’s James Pesek cut his right front tire while passing the pits and littered the track with debris.  The debris resulted in the race’s one and only caution.

Everyone in Grand Sport that hadn’t made their first stop came in at this point.  Others that already had stayed out.  This gave the lead to Turner Motorsport’s Bill Auberlen with Heylen right on his tail.  Almost as soon as the green came back out with 55 minutes to go, Heylen was able to get past Auberlen and take the overall lead.

The second half of the race had teams using a series of different strategies.  Heylen made his final stop 10 minutes later after setting the fastest lap of the race.  Auberlen and Archangel Motorsports’ Trent Hindman pitted a lap later and HTP Winward Motorsport’s Indy Dontje a lap after that.  Meanwhile, Liefooghe pitted on lap 22 during the caution and attempted to stretch his fuel.  DePew pitted during the caution on lap 24 and handed over to Liddell at effectively the halfway point on time.

Once the leaders stopped, Motorsports In Action’s Spencer Pigot ended up in the lead with more than 20 seconds over second.  Their strategy was to stretch out their second run before pitting on lap 40 with 25 minutes to go.  The results were ok, but stopping took them out of the hunt.

Liefooghe inherited the lead when Pigot stopped with Liddell in second.  Meanwhile, Heylen was charging through the field and moved himself up to third.  Heylen was significantly faster than Liddell in front of him as well.

However, in the closing laps, Liddell’s Camaro began smoking because of an oil leak.  That resulted in Wright Motorsports making a call that they didn’t want to make.

Due to the oil over the track, we’ve ordered Jan to stop chasing the 71, as it’s not worth crashing. He’s been given a black flag and needs to pit. Preferably sooner rather than later.

As Wright Motorsports noted in their tweet, Liddell was given the black flag with two laps to go.  IMSA rules stipulate that you must serve a black flag within two laps or they will stop scoring you.  Liddell chose to stay out for the final two laps and nursed his stricken Camaro to the finish.

DePew and Liddell’s margin of victory was 3.343 seconds over Heylen and Root.  Auberlen and Machavern were third, followed by Hindman and Brynjolfsson.  Despite their late stop, Liefooghe and Quinlan ended up fifth.

Ward and Dontje were sixth in their Mercedes, while Robby Foley and Vin Barletta were seventh in the second Turner BMW.  Monk and Pigot ended up eighth with Andrew Wojteczko Autosport’s Fidani and Kuno Wittmer close behind in ninth.  Murillo Racing’s Eric Foss and Jeff Mosing were 10th.

In TCR, Atlanta Speedwerks’ Brian Henderson started from the pole and led early in his Honda Civic Type-R TCR.  Outside pole sitter Tyler Gonzalez didn’t have it so good.  His Hyundai refused to start when the command was given.  By the time Copeland Motorsports was able to get the car underway, he was already eight laps down, ending any chance at a decent showing.

Since Daytona, Roadshagger Racing acquired a new Audi RS3 LMS Club Sport, this one with a sequential gearbox as opposed to their previous car that had a DSG transmission that was shifted via paddles.  Jon Morley explained to NBC Sports that this version of the Audi better suits Gavin Ernstone.  With it, Ernstone qualified fourth and raced his way up to second behind Henderson.

Pit strategy in TCR was a little different.  All of the TCR cars can run the full two-hour race with only one pit stop.  Bryan Herta Autosport chose to split things up into three segments regardless.  The caution more or less burned them.

For Henderson, his chances of winning also ended during the caution, but for a different reason.  Despite leading, Henderson was having braking issues.  During the caution, the team went to work to try to alleviate the issue.  Unfortunately, this was futile and meant the end of the day for the Gainesville, Ga.-based operation.

Van der Steur Racing pitted right before the caution came out.  That allowed Denis Dupont to take the class lead with JDC-Miller MotorSports’ Mikey Taylor giving chase.  Morley and LA Honda World Racing’s Mat Pombo were right in the hunt as well.  Taylor was able to pass Dupont on lap 33 and began to pull away.  Meanwhile, Dupont, Morley and Pombo fought hard for second.  After five laps of scrapping, Morley emerged in second, 4.4 seconds behind Taylor.

Then, disaster struck.  Taylor broke the left front axle on his Audi and was forced to stop for repairs.  Taylor was able to finish the race, but ended up six laps down in 30th overall, 12th in TCR.

Taylor’s woes gave Morley the lead with Pombo trying to run him back down.  Morley was able to hold on to the advantage take his and Ernstone’s fourth career victory and first of 2021.

Morley and Ernstone ended up 2.270 seconds ahead of Pombo and Mike LaMarra.  Bryan Herta Autosport’s Taylor Hagler and Michael Lewis were third in their Hyundai Veloster N TCR, while KMW Motorsports with TMR Engineering’s Roy Block and Tim Lewis Jr. came from the rear of the field to finish fourth in their Alfa Romeo.  Michael Johnson and Stephen Simpson were fifth in their Hyundai.

Michelin Pilot Challenge teams are off for the next six weeks.  Round No. 3 is scheduled for May 15 at Mid-Ohio Sports Car Course.

Haha. A team more than 5 seconds behind with 2 laps left ‘orders their driver to stop chasing’. That’s rich.