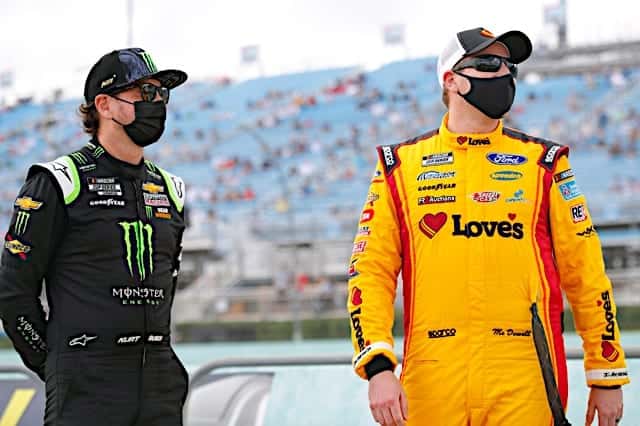 With three winners already this season that aren’t your conventional names, talk of the 2021 playoff field is already heating up. After all, who would’ve expected Michael McDowell to have a spot locked up? And Christopher Bell and William Byron to have theirs this early?

Will 2021 be the year that the regular season sees more than 16 winners?

Noah Gragson was well on his way to a dominant (and well-deserved) victory at Homestead-Miami Speedway, a place that’s been good to him up until the late stages. But a run-in with David Starr caused his night to end prematurely.

Who’s to blame for the late-race incident?

Q:  Was I right when I said there’d be more than 16 winners this year? – Michael M., Lynchburg, VA

A: Check back with me in a few months, and I’ll let you know if you’re right, Michael. *winky face*

In all seriousness, it’s going to be hard to reach that number. It hasn’t been reached since the implementation of this playoff format in 2014, but that doesn’t mean it can’t be done this year. Again, three winners (and one that was a legitimate surprise) make the race to 16 more intriguing. And, if you’re a bigger name driver, the collar will get all the more tight as the regular season comes to a close and you don’t have a win, a la Kyle Busch last year.

Many (myself included) thought that Homestead would be the site of the “regulars” returning to form. Kevin Harvick, Denny Hamlin, Joey Logano, Chase Elliott, Martin Truex Jr., etc. running up front, dominating and reminding everybody who really runs the NASCAR Cup Series.

But then Chris Buescher went out and passed Brad Keselowski in stage 1 and won the segment, Tyler Reddick charged from the 30s to a runner-up finish, McDowell scored his third straight top-10 finish, a new career-best, and William Byron wound up in victory lane.

“The others” sure do seem to have the hang of this racing thing.

It’s still hard for me to believe that once the Cup Series heads to tracks like Atlanta Motor Speedway, Texas Motor Speedway and Kansas Speedway, the bigger teams won’t be a smidge ahead. Or that Elliott and Truex won’t be the class of the field at the other road course events, or that Hamlin and Keselowski won’t be leading the pack at superspeedways.

With that being said, the Cup Series is 3-for-3 when it comes to relatively surprising winners (when it comes to odds and venue). And heading to Las Vegas Motor Speedway this weekend, why not roll the dice on another sleeper?

Q: What’s your take on the whole Noah Gragson/David Starr deal at the end of the Xfinity race at Homestead? – Tracy M., Plano, TX

Sure, Gragson could have (and should have, in hindsight) backed it down in the closing stages. Having an over seven-second lead on older tires (while pulling away and not running 100%) on a track that degrades tires as much as Homestead is a recipe for potential disaster. Plus, factor in Gragson’s record of losing in the most unfortunate of ways at the very same venue in the last couple years. Should we have seen this coming?

Nah, probably not. Because nobody could have predicted Starr’s tire to cord when it did, where it did and how it did.

Gragson isn’t doing himself any favors, as an already rather polarizing driver, by doubling (and tripling) down on his “dipshit” comments post-race to FOX Sports. But the man feels the way he feels, and he has every right to feel that way.

Thing is, though, it doesn’t change what happened, even if Gragson “[doesn’t] really feel any [different]” about it. And it’s not like Starr was laps down — he was on the lead lap, running well for MBM Motorsports, an insanely underfunded organization.

Carl Long, owner of MBM Motorsports (and David Starr's No. 13 car), on the incident with Noah Gragson at the end of Saturday's Xfinity Series race: pic.twitter.com/ziVcksCL8U

Gragson and Starr have apparently spoken, but that won’t really change anything that did or will happen in the future. Gragson and Starr are going to race the way they have up until this point and will certainly be racing around each other more this season and beyond.

So, Tracy, both drivers are at fault. Gragson could have slowed down or taken the bottom, and Starr could have pulled off track earlier as soon as he felt something. But neither did, and here we are.

C’est la vie, as they say. Onto Vegas.

You know, maybe it’s because I hadn’t followed the sport for years, but it suddenly dawned on me that the Xfinity and Camping World Series is now full of series regulars, without Cup guys taking over the field and showing off by whipping lesser drivers and teams.

They truly are both developmental series again, and it’s a place where you can see future Cup stars. It was ridiculous when the then-Nationwide series was full of Cup drivers, and NASCAR’s rookies were all open wheel drivers who were great until they had fenders on their cars.

NASCAR and Brian France lost me for a lot of years, but it seems like they have finally learned from their mistakes. I’m actually enjoying the “minor league” races again.

Don’t hold your breath on that Kurt. Looked on my calender and there are 5 Xfinity races I have crossed out because Kyle Busch is in the 54. We can only hope someday NASCAR can come to their senses.

Also Kyle Busch in the trucks for 5, including the one on Friday.

I wouldn’t mind seeing more than 16 winners in Cup, so that the much-lamented “underdogs” would actually have to earn their way into the Playoffs instead of taking up space based on a fluke.

I also think Noah Gragson is an entitled brat, who one year ago, was being mentioned as a replacement for Jimmie Johnson, and now may be clinging to his ride. He is one of those drivers (Danica comes to mind) who always blames somebody else for his screw-ups. I wish Junior had the balls to get rid of this creep.

If memory serves me (sometimes it does, sometimes it doesn’t), Noah Gragson has caused his share of on-track incidents in the past. Apparently his memory is no better than mine.