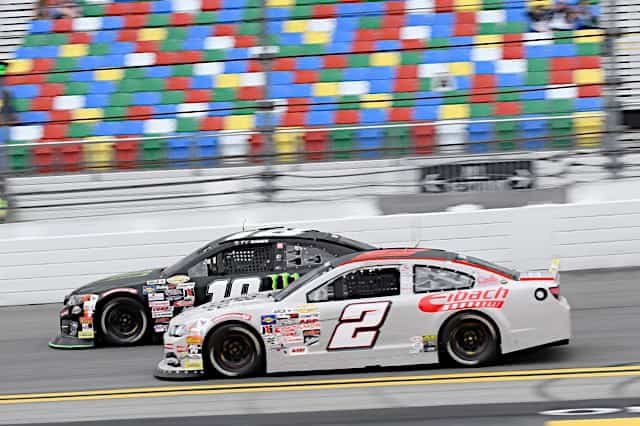 While the three NASCAR national touring series utilize a playoff system, the ARCA Menards Series still uses a season-long points system. The past two years, the championship battle has not been settled until the season finale at Kansas Speedway.

Even though only one race has been completed thus far this season, five percent (1 out of 20) of the ARCA season is done. The three frontrunners for the championship this year are Ty Gibbs, Corey Heim and Nick Sanchez. In the season-opening Lucas Oil 200, all three drivers left Daytona with different outcomes, emotions and a championship battle already underway.

After Gibbs paced the field in the practice session, all three drivers started close to each other – Heim in ninth, Sanchez in 12th and Gibbs in 13 place.

On lap 28, misfortune struck Sanchez, as he was involved in a wreck that began due to a bump draft gone wrong for Venturini Motorsports teammates Gracie Trotter and Derek Griffith. As a result of the damage to his No. 2 Chevrolet, Sanchez was relegated to a 31st-place finish. In his first full-time season and fifth career start, Sanchez collected just 13 points. He ultimately attributed his DNF to superspeedway racing.

Meanwhile, Heim, who also drives for Venturini, and his teammate Drew Dollar teamed up to lead 56 total laps. Gibbs had a fast No. 18 Joe Gibbs Racing Toyota, but he appeared unable to catch the Venturini duo. On an overtime restart, though, he had a shot; but the Venturini duo worked together to ensure no one could catch them.

.@CoreyHeim3 gets it done at @DAYTONA ?

The second part, which continues to be spicy. pic.twitter.com/I2ZTXPm6Fj

Despite Gibbs’ frustrations with the Venturini teamwork and the possibly excessive amount of time Heim and Dollar locked their Toyota bumpers together, his frustrations did not endear him to many people, including NASCAR Hall of Famer and former JGR driver Dale Jarrett.

Someone might should remind young Ty Gibbs that his grandfather's 1st win as an owner came on that awesome track at Daytona that he considers "not a real racetrack"! Kids ?

In Gibbs’ defense, he is only 18 years old. Moreover, his resume thus far is outstanding. He has eight wins, 20 top fives and 24 top 10s in his 28 ARCA starts and finished fifth in the championship standings last year. The result made Gibbs the highest-ranking driver that was not full-time in 2020.

Still, Gibbs failed to lead any laps in at Daytona. A few hours after the race, with his emotions in check, he apologized for his previous statements.

I just wanted to say sorry to everyone listening to that interview. I’m a hot head and I need to fix it. I will work on it.

Six of the tracks Gibbs won at are back on the ARCA schedule this year – Iowa Speedway, Phoenix Raceway, Pocono Raceway, Salem Speedway, Toledo Speedway and Winchester Speedway. Prior to the season, three of the four writers on a Frontstretch ARCA panel predicted him to win the championship this year.

Heim was the lone driver of the trio to leave Daytona in a pleasant mood. He had good reason too: he won the season opener.

In his post-race media Zoom session, Heim asserted he would have won the race even if the last caution had not occurred. He also indicated that he won without any knowledge of team orders.

“We had the race won pretty much without the caution,” Heim said. “All I was told was to start on the outside, hammer down and go win the race – which is exactly what I did.”

Thanks to the win, Heim is the early points leader. Gibbs is in fourth place, eight points back. The DNF truly hurt Sanchez, as he is 31st in the championship standings, 35 points behind.

ARCA now has almost a month off between races for its main series, with its next event on March 12 at Phoenix in a combination race with the season opener for the ARCA Menards Series West. Heim, understandably, has confidence and momentum on his side to begin the season.

“Starting the year off like this, especially when there’s a huge car count, if we had a DNF or something, it would’ve been a rough start, but luckily we were on the other end of it,” Heim said in his post-race Zoom session. “It will really do wonders for the rest of my season.”

How many fans can relate to a spoiled rich hot head? I watch ARCA to see talented young drivers like Heim and Griffith climb their way up the food chain. It just amazes me that their talent can sometimes overcome the full force of the powerful Gibbs organization. It’s not a crime to be rich but a rich jerk is intolerable.

Try not to pick on a guy his age but he’s 18 and in theory at least a professional. I’ve watched many of his post race interviews the last couple years and guess what? Every time he comes off as a whiny self-entitled brat. Should be fun to watch when he lands in cup far to soon for his maturity or talent (successor to Kyle perhaps – seems like it would be a seamless transition personality wise).

Imagine if Ty DOESN’T get the season-long title? There won’t be enough cheese to keep up with the whine.

They should watch Andy Js interview a racer that pays his own way and works on his car and appreciates the chance to racecDaytona.