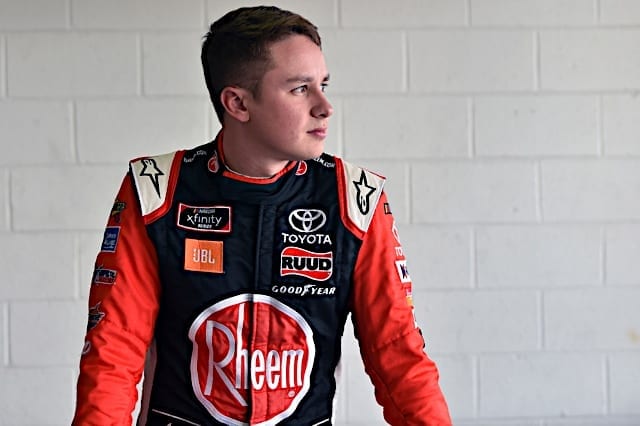 Christopher Bell enters 2021 as the driver of Joe Gibbs Racing’s famed No. 20 Toyota, taking over for Erik Jones after spending his 2020 rookie season with Leavine Family Racing. Prior to jumping to the Cup Series, Bell spent two full-time seasons apiece in the NASCAR Xfinity and Camping World Truck series, winning the 2017 title in the latter. As for his two years in Xfinity, Bell won at least seven races each season and made the Championship 4 in both campaigns.

The 26-year-old Oklahoman first made his name racing on dirt, which translated into his first career NASCAR win. That triumph came at Eldora Speedway’s Truck race in 2015 amidst Bell’s seven-race stint for Kyle Busch Motorsports that year. He led 106 laps that race and outdueled Bobby Pierce en route to the victory.

Frontstretch recently caught up with Bell to talk about joining his new team, competing in a rookie season impacted by a worldwide pandemic, his outlook for Bristol Motor Speedway’s dirt event and reflecting on more than half a decade of NASCAR racing.

Adam Cheek, Frontstretch: 2020 marked your fifth full-time season in NASCAR’s top three series, where you had success in Truck and Xfinity and then made your Cup debut a year ago. Looking back on the last five years, what has this rise through the ranks been like from your perspective?

Christopher Bell: It’s been really fun to be a part of. I’ve been really fortunate to drive for such great race teams, starting at Kyle Busch Motorsports in the Truck Series and building those relationships with Jerry Baxter, my crew chief [in 2016], and Rudy Fugle, who was my crew chief the second year when we won the championship. That was really, really cool, and I have memories that will last a lifetime from there. On the Joe Gibbs Racing Xfinity side and driving for Jason Ratcliff — really, he’s kind of been the moral of my story for the last several years. He’s done a great job and inarguably is why I am where I am today. So I have a ton of respect for Jason, and he’s done really good providing me good racecars in the two Xfinity years, and last year in the Cup Series as well. It’s been a heck of a ride, and I hope I have several more years to go.

Cheek: You won the Truck title for Kyle Busch Motorsports in 2017, and now you’re competing against him while sharing the JGR stable. How surreal or full-circle is it to now be teammates with your former owner?

Bell: It’s going to be interesting. We haven’t really spent much time together, but it’s going to be interesting once we get to Daytona and see how it is. Essentially, we were kind of teammates last year, while I was over at LFR, so dealing with Kyle … he’s definitely a lot different now that we’re teammates than he was as a team owner. He was cheering for me as a team owner, and now he wants to beat me. But that’s okay. I want to beat him too.

Cheek: Your first win as a full-time Xfinity driver came with Gibbs back in 2018 at Richmond Raceway in the spring, during your rookie season. Less than three years later, you’re back with JGR, now at the Cup level. Did you ever dream you’d be here this soon?

Bell: I hoped to, and being at Joe Gibbs Racing in the Cup Series is where the end goal was ever since I was driving for the Toyota dirt car series. It’s pretty cool to see that this is what we’ve all geared up for for so many years and now to be here … I’m just trying to take it all in, and obviously the day job’s about to start, so I need to do as good as I can here and try and prove to these guys that I’m the right driver.

Cheek: Obviously, NASCAR as a whole won’t be back to normalcy for a while, but how do you reflect on the bizarre 2020 season, everything from the stoppages, to the safety protocols and how the series eventually managed to continue despite the COVID-19 pandemic?

Bell: I just hope that going forward, we can get back to more normal circumstances. I think we’re right on the cusp of getting there. And hopefully here, especially before the season ends, we’ll be able to see grandstands with people in them and stuff like that. I’m very thankful that NASCAR has taken the chance of starting early last year when they did and allowing us to get back to the racetrack and at least providing some entertainment for people sitting at home watching on TV. We, all of us in the industry, are ready to see people at the racetracks again.

Cheek: You had a rough start to last season with five finishes outside the top 20 to start the schedule, but as the season went on, you got two top fives and seven top-10 finishes, one of LFR’s best seasons to date. Of course, 2020 was their last season as a team. What did that mean to give them that in their final season, and how much confidence does that give you heading into 2021 with JGR?

Cheek: As someone with experience racing on dirt, how do you race differently against drivers who also have significant dirt backgrounds versus drivers with less?

Cheek: You were chasing Larson for the win a few weeks ago in the Chili Bowl and ended up flipping four times near the end of the race. Your first full-time Truck Series season five years ago kicked off with you tumbling nine times at Daytona in 2016. How does rolling in a dirt car with so little around you compare to doing it in a truck?

Bell: It’s not ideal, that’s for sure. But I was laying it all on the line, man. I was trying to go for the win, and I was there. Sometimes you win, sometimes you wreck, and unfortunately I wrecked there. The dirt cars, there’s a lot less cushioning — you mentioned it, you don’t have as much support around you, so all the hits are a little bit harder, where [in] the stock car, everything gives a little bit more. The stock car, you can definitely tell it weighs a lot more. Whenever you start flipping in that sucker, you can tell you’re gonna be flipping for a while just because of the momentum it has.

Cheek: As someone who has separate experience on dirt and in a Cup car, how are you trying to blend those two experiences to prep for the Bristol dirt race, despite no one knowing quite what to expect?