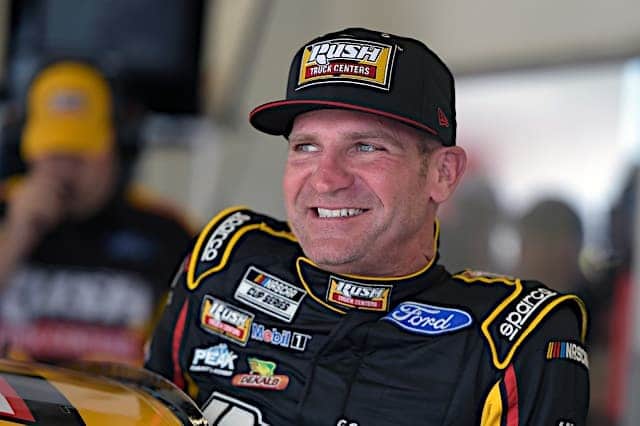 Lost in the conclusion of the 2020 NASCAR season was the rather abrupt departure of Clint Bowyer from the driver’s seat.  Bowyer, who was wrapping up his 15th full-time season as a Cup Series racer, faced an uncertain future with Stewart-Haas Racing.  Despite some speculation that SHR’s driver lineup would not change for 2021, Bowyer announced late last year that he had accepted a broadcasting job with FOX Sports, signaling the end of his career as a Cup Series regular.

In 541 career starts, Bowyer collected a commendable 10 wins, 82 top fives and 226 top 10s, as well as a championship in NASCAR’s second-tier series.  Although long winless slumps and inconsistency plagued the final years of his career, Bowyer proved his skill as a capable driver in the hyper-competitive field of professional stock car racing.  He enjoyed a level of success that relatively few in NASCAR’s history have reached.

But Bowyer has perhaps become better known for his off-track persona.  Embracing the role of a free-spirited, wise-cracking, grown-up kid, he became a goldmine of one-liners and humorous soundbites.  Bowyer’s banter with former rival Jeff Gordon during last year’s iRacing events were some of the best moments from those broadcasts.  Sure, Bowyer has a tendency to ham it up a bit when he knows there’s a camera around. Yet it still feels like the version of Clint Bowyer that we see in public is not too far afield from the version that exists away from the bright lights and thundering engines.  With Bowyer, what you see is what you get.

Of course, Bowyer’s happy-go-lucky personality has its limits.  Underneath the grinning country boy, after all, is a competitive racer who wants to win just as badly as anyone on the track.  Those who got on Bowyer’s bad side were sure to experience an outflow of genuine emotion.  Gordon famously found himself on the receiving end of Bowyer’s rage after their infamous altercation at Phoenix Raceway in 2012.  Bowyer even lashed out at his own team from time to time, most often during a difficult season with HScott Motorsports in 2016.

Yet there was another time when Bowyer’s frustrations erupted like a volcano for all to see, not as rage, but as brutal honesty.  That was nearly six years ago during qualifying for the 2015 Daytona 500.  Instead of the traditional single-car laps to set the initial qualifying times, NASCAR tried using its group qualifying format for the Great American Race for the first time.  While NASCAR had tested the format during the previous season, using group qualifying on superspeedways had proven to be problematic for the teams.  Since drivers naturally ran faster lap times while drafting off another car, nobody wanted to be the one leading the rest of the pack around the track.  This situation led to Bowyer, Reed Sorenson, and several others getting collected in a crash.  When asked about the accident on TV, Bowyer didn’t hold back.

Bowyer may have been angry that day, but he wasn’t wrong.  In fact, his frustration was the catalyst for NASCAR revising its group qualifying procedures at superspeedways.  While NASCAR would still use a group format with timed rounds, cars were permitted to leave pit road only one at a time in staggered intervals, meaning that nobody could draft off each other.  Although Bowyer became an unfortunate victim of the group qualifying experiment, the crash provoked him to say what nobody else was willing to in that moment.

Throughout his career, you could always count on Bowyer for a candid comment – with one exception.  In the aftermath of the 2013 controversy that would become known as “Spingate,” Bowyer was less than forthright.  During the closing laps of the final regular season event at Richmond Raceway, Bowyer spun into the infield, triggering a yellow flag.  The caution and pit stops that ensued allowed Martin Truex Jr., Bowyer’s then-teammate at Michael Waltrip Racing, to beat Ryan Newman for the final spot in the Chase.

The timing and circumstances of Bowyer’s spin were convenient for Truex, perhaps a little too convenient.  Additionally, the radio chatter among several of the MWR teams led many fans to believe that Bowyer had spun out on purpose in order to aid Truex.  NASCAR spent several days investigating the end of the race and eventually levied points penalties against MWR.  The penalty issued to Truex dropped him out of the Chase, to be replaced by Newman.  Bowyer lost points too, though not enough to take him out of the postseason.

But if NASCAR’s penalty didn’t make a real impact on Bowyer, the court of public opinion did.  Since he was the one who spun out and triggered the caution, he and team owner Michael Waltrip were the ones who took the most heat from fans.  It was pretty clear that Bowyer was uncomfortable playing the role of the antagonist.  For the rest of the season, there were no lighthearted jokes, snappy one-liners, or big grins for the camera.  Instead, Bowyer acted evasive and aloof, even lashing back at the media on at least one occasion.  While he never admitted to anything specific, Bowyer’s behavior, so different than what fans were used to seeing, indicated that he probably did spin on purpose.

That’s not to suggest, however, “Spingate” is the defining moment of Bowyer’s time in NASCAR.  The controversy was serious, but the parties involved have moved on.  In Bowyer’s case, his NASCAR career isn’t even over; after hanging up the helmet, he gets to try his hand at broadcasting.  Hopefully, that decision means he will bring the same enthusiasm, goodwill, and honesty that he showed for most of his career to the booth.

Too often, it feels like NASCAR’s broadcast partners grow complacent with their roles in the sport.  The most influential commentators, even the ones who were competitors themselves, reach a point where their own interests become tied closer to those of the sanctioning body.  As a result, they tend to start toeing the company line.  Certainly, NASCAR doesn’t benefit from analysts who are critical of the sport just for the sake of being a contrarian’s voice.  But there is a difference between defending everything they do and interpreting how the decisions they make impact the sport overall.  Doing the latter requires critical thinking, a little courage and that all-important honesty.  It’s the kind of analysis that keeps NASCAR healthy and helps the sport move forward as a whole.

Is Bowyer capable of being the critical voice that NASCAR’s media needs?  His comments at Daytona in 2015 suggest that he might be capable of that role.  But while Bowyer has always given a good quote, his discomfort with the aftermath of “Spingate” obviously caused him to shy away from addressing the controversy directly.  Can he change course the next time he’s the center of unwanted attention?

If Bowyer can grow more comfortable with being a critical voice and bring a high level of objective thinking into the booth, he could have a great second NASCAR life as an analyst.  Although his driving career ended quietly, his impact on the sport is far from over.

I predict if Clint tries to remain Clint on TV it’s only a matter of time before a slip of the tongue gets him in trouble with the new ministry of political correctness. As a member of a non-protected class, he’ll be cancelled within minutes of said gaffe.

That’s a good point. The line is razor thin between OK and not OK. He does seem like the type that might say something awkwardly that would upset the crowd that constantly are on the lookout for things to get offended over.
I wonder if there is a line on that in Vegas?

My feelings exactly. Clint will last as long as the PC police and NOOSECAR allow him. With Clint’s personality, I am afraid it won’t be long before he pisses off the WOKE crowd and most likely the network and NOOSECAR will not stand behind him and he will be gone. That’s how it works in this day and age.

what he’s going to have to watch is to not become michael waltrip 2.0. we don’t need another clown in the booth. fans who still tune in want to see racing and not hear so much banter back and forth. be interesting to see how he blends in with mike joy and jeff gordon. i don’t think daytona 500 will be a test, as that race is such a crap shoot anyhow. after about week 3 maybe we’ll see what it will end up being.