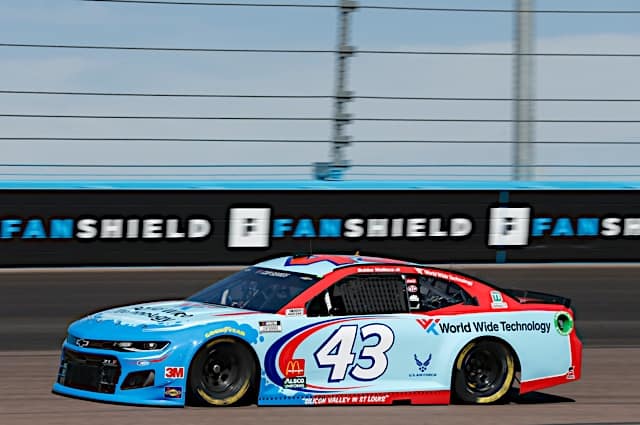 Bubba Wallace stood atop the underdog pile when the final checkered flag waved on Sunday at Phoenix Raceway. After a tumultuous season of ups and downs, Wallace put a period on his tenure in the Petty No. 43 with a 15th-place finish. He ran as high as seventh, and at the end of each stage, improved his position over the previous one.

Statistically, 2020 was Wallace’s best in the Cup Series. He had one top five and five top-10 results, but six DNFs kept the team from making a significant run at a playoff spot. Wallace spent a great deal of time in the spotlight, first during a period of social unrest that saw him mentioned by everyone from LeBron James to President Donald Trump. Then speculation began to swirl around a potential partnership between Denny Hamlin and basketball legend Michael Jordan, which became a reality late in the season. Though Wallace is moving on to the new team in 2021, it was important to him to finish the current year on a high note.

“Well, capping off a great day, a great way to end the season with everybody, RPM driving the [No.] 43, top 15 for us so really excited, really pumped for that.” Wallace said. “Good way to set up the offseason and keep the momentum building for everybody there, so just an incredible year — I mean, an incredible three years, it’s crazy that it’s already been three years. Ready to start a new chapter, but it’s definitely tough to think about all the relationships, not necessarily that we left behind. All of my guys, my A team, my B team, everybody at the shop. A great family-oriented team. I love each and every one of them to death. It’s an honor to even be in their presence and drive the race cars that they build. I know we had a lot of tough days, but we had a lot of great days too. We never gave up on our tough days, I appreciate that. I applaud everybody’s efforts through the thick and thin. Each and every time we came to the racetrack fighting and swinging, and that’s all you can ask for.”

Yep that’s right. No one managed to join Wallace in the top 20. This has seemingly become a regular occurrence for the underdog contingent, particularly in the latter stages of the year. There are a few things that could be the culprits. First off, the cars are more mechanically durable than ever before. Engine failures and other such issues don’t blindside the top teams as often as the once did. By not thinning out the top heavyweights, it leaves less room for the little guys to break through. Also, some of the better underdog outfits over the past couple years have entered into partnerships with bigger teams that essentially negate their status as an under-equipped program.

On Saturday, the Xfinity Series wrapped things up with Jeremy Clements taking the 10th spot, setting a career high of five top 10s in one year. Just behind Clements was Brandon Brown in 12th, Josh Williams 13th, BJ McLeod 14th and Bayley Currey wound up 15th at the end.

The Truck Series underdogs had a less than impressive outing at Phoenix. None of them managed to crack the top half of the field; Trevor Bayne being the best in the category with his 18th place finish.

With the season finished, expectations now focus on 2021 for those who will return. But let’s shine a light on a couple who will not be back at Daytona. Leavine Family Racing was an ultimate underdog from the get go. The team began on a part-time basis and employed such drivers as Scott Speed, Michael McDowell, Matt DiBenedetto and Christopher Bell. However, Bell’s arrival came with an increase in support from Joe Gibbs Racing that basically turned the No. 95 into a satellite JGR team. In our eyes, underdog status was removed, but the organization was still run in a similar fashion. Bob Leavine announced that the team would cease operations after 2020, citing the increased expense as one of the factors in the decision.

Joining LFR on the chopping block was Germain Racing. Germain received some technical expertise from Richard Childress Racing but was still an independent outfit. Ty Dillon brought the team to its highest level this season, but it simply wasn’t enough. Running a Cup Series team is a balance between going broke and being competitive enough to acquire full financial backing. From the minute the doors open, owners are in a race to see which happens first. Unfortunately, for both LFR and Germain, the well ran dry before the rain began to fall.

Thank you Bob Germain and @GermainRacing for 6 solid years! https://t.co/T812sR1gPj

Solid run tonight in the #DesertDiamond200 @phoenixraceway to cap off a solid @NASCAR_Xfinity Series season with the @MhrRacing boys. Tonight was my 50th career @XfinityRacing start and we brought home another top 15, that’s 3 for the year with 9 top 20s in 26 starts for 2020! pic.twitter.com/x1HBvlKpwj

To the guy I’ve idolized. To the guy I geeked out over at DIS when filling in the 43 in 2017. To the guy that’s been all class on n off the track. To the guy who called me just about every day during the madness of this season. To the guy I’m honored to call friend. Thanks JJ!?? pic.twitter.com/rnJ0GucbxG

The 43 team was ecstatic yesterday. Excited to move on to a real racer driving for them next year. Pretty sure Jones will have no problem finishing that car better than 22nd next year

The Great Santini
Reply to  Echo

Bubba Wallace is not a Nascar Cup driver, but plays one on TV.

He is a loser and always will be

Every thing Bubba has gotten is because of the color of his skin not because he is a good race car driver, But now all the pressure is on him, He now has a big money owner and will have Gibbs cars next season to race in, So if Bubba dose not win next year what will people say then

The media will treat Bubba as Danica 2.0 and so will CRAPCAR. They will give him every break in the book and promote him at every opportunity. You know that they will do anything to keep him at the forefront. Two years after the same results as this year, he will join Danica where he belongs on the sideline.

Are least Danica won a race even if it was in Japan !

Excuses. That is his middle name. Or blame others. Only way I see him win next year be Nascar turn blind eye on rules & let him win trying boost low ticket sells. Anybody don’t know what a garage door pull rope look like or use big bunch drama media because there phone not ringing for next year they don’t belong in racing.

Racing is just like “Football “,wait until next Season !!! It boils down to Equipment and Sponsors ( Money)….

I think Darrell (that’s his actual name) is straight up despicable. He knew damn well that what that noose was. With a single press statement he could have told the truth and sent the media dogs packing. He could have saved NASCAR and its fans a great deal of BS. Instead, he went right along with it for the attention and political gain. It absolutely infuriated me to see him leading all the teams as they matched through the pits like he’s the mighty exalted one. The guy has never won a major series race and never will.

you know that Darrell never actually saw the noose, right? He was told a noose was found in his garage stall. He didn’t report it, he didn’t find it, he never saw it. He reacted based on what he was told- just like just about everyone else did.

How dare you interrupt his bigotry with your inconsequential facts!

Sorry but Bubba went on CNN and doubled down even after the facts were brought to light. Ed is absolutely right. He could have squashed it then and there, but he chose to keep it going. And by the way, disagreeing with someone does not make them a bigot. You might want to look up the term as you appear confused.

Oh how I can’t wait for two to three years from now. When Bubba wins his first of few championships and all the bigots heads explode.

I’ve always been curious about the chicken and egg dichotomy. Does being a bigot make one stupid or is it that only stupid people are bigots?