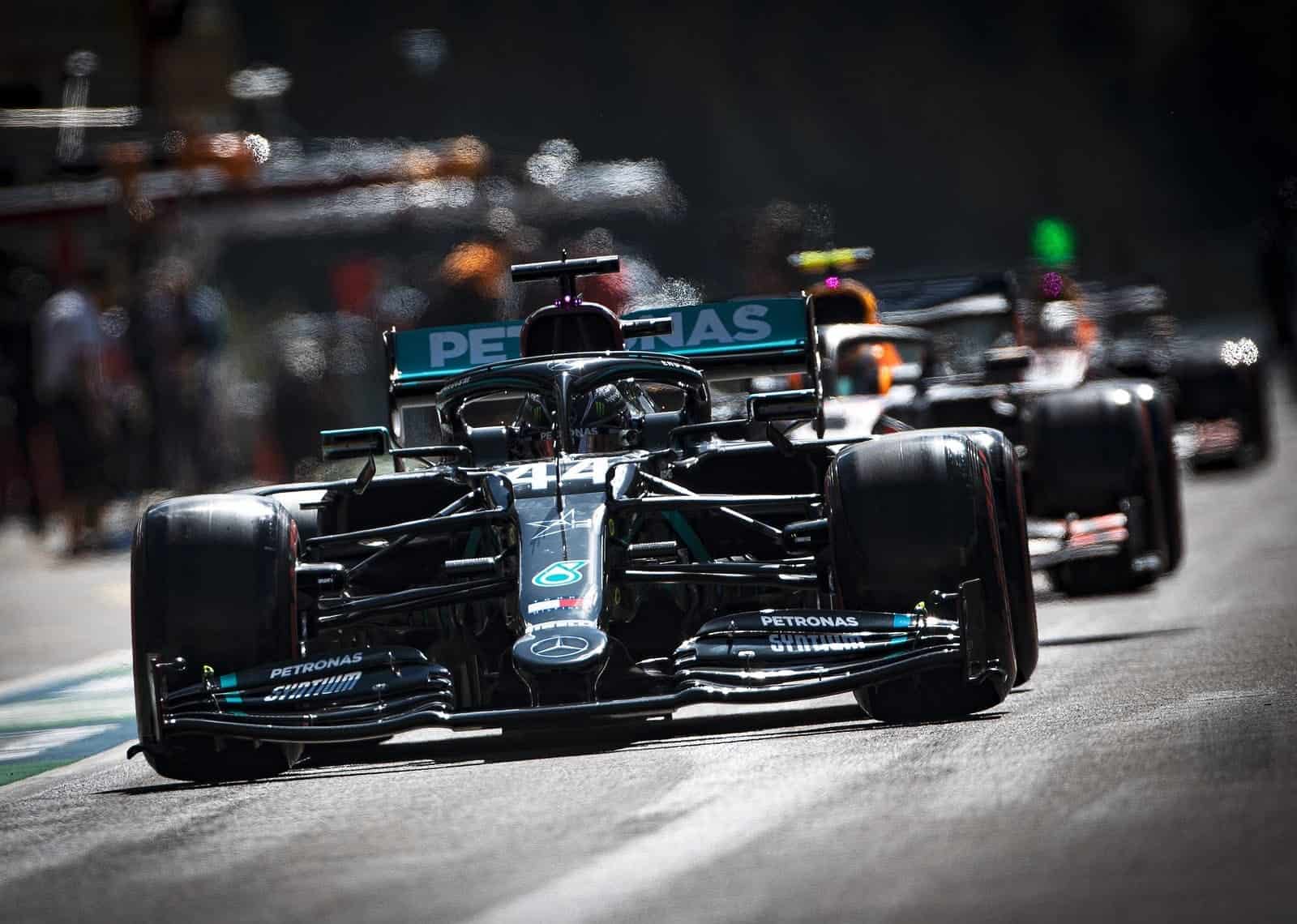 For the ninth time in the 2020 Formula 1 season, Lewis Hamilton claimed pole position – this time at the Portuguese Grand Prix, at Portimao (Saturday, Oct. 24).  Hamilton bested his teammate Valtteri Bottas by a tenth, a surprising outcome after Bottas had looked to be the fastest driver on track through the three practice sessions.

Mercedes made a bold move to switch Hamilton to medium tires in the last stint of qualifying, a decision that proved to be the difference when he pipped his teammate for the top spot.  Managing the tires has become a challenge this weekend as the soft compound appears to be the fast set and extremely temperamental.

Max Verstappen took his customary third position on the grid, again the driver closest to the rear wings of the Mercedes twosome.  Charles Leclerc has continued his trend of showing improved performance in his Ferrari, earning the fourth spot.

The Sky Sports announcing crew called Sergio Perez the fastest unemployed man in the world, which he backed by setting the fifth-best time.  Alex Albon will start alongside Perez in the sixth spot.

The McLaren duo locks out the fourth row, with Carlos Sainz in seventh and Lando Norris in eighth.

Pierre Gasly made sure to keep his name in the mix for any available seat by earning the ninth-quickest time.  Gasly has found no assurances from Red Bull about where he will be next year, even if all signs point to his return at AlphaTauri.

Rounding out the top 10 in qualifying was Daniel Ricciardo, who never took the track in Q3 after spinning out in Q2 and backing his Renault into the tire barrier.  The team attempted to get him out but instead settled for the 10th spot and avoiding any more potential damage.

Qualifying was delayed about 35 minutes because of the need to repair the track in a couple of spots.  This issue is a direct result of the sport dropping in on tracks that it has not usually visited, meaning they have not gone through the usual rigors of hosting a race.  What is surprising is that it took so long to discover the loose drain covers and track concerns, not finding them until FP3 and being able to address them until before qualifying.

As for the qualifying session itself, it appears that Hamilton may have benefited from having one more lap to warm his medium tires than did his teammate.  Bottas had been equal measure to Hamilton but just could not get there in the end.

Starting first gives Hamilton the view of an open track and charging to a win that would establish him as the all-time winningest driver.  He is currently tied with Michael Schumacher, atop the heap with 91 wins each.

It is common to start discussing the scenarios that need to play out for Hamilton to win the championship around this time of the year, but with six races still to go, including the Portuguese GP, that analysis will have to wait … until the next race at the Emilia Romagna GP.

– This event marks the first time F1 has visited Portugal since 1996.  This track is the fourth different venue to hold an F1 race in the country.  The track features 15 turns along its 2.89-mile length and undulates along the hilly countryside, reminding some of Spa and Nurburgring.

The Portuguese GP was a staple of the F1 schedule in the 1980s and 1990s but then fell off because of financial issues.  Jacques Villeneuve won the last GP in the country.  No driver on the grid has driven the current track competitively.

–  With the announcement Haas F1 will no longer desire the services of Romain Grosjean and Kevin Magnussen for 2021, two more seats have opened.  That decision has led to F1 Silly Season becoming more fascinating as many mid-tier rides are seeking to fill their lineups.

AlphaTauri has teased that they have made no decisions, but most people see them keeping Gasly while dropping Daniil Kvyat and replacing him with Japanese driver Yuki Tsunoda.

In contrast, Haas, Alfa Romeo and Williams are all in situations that have more questions than answers.  The top half of the grid looks settled, but the second half is a jumbled mess of subterfuge and misdirection.  Surely, Sergio Perez will now continue his F1 career, but does Nico Hulkenberg return?  Is there a surprising driver making the jump?  Is Williams looking to begin completely anew with new ownership, management and driver?  These are the storylines worth following as the season marches on.

– The long, slow divorce between Sebastian Vettel and Ferrari continues with another disappointment.  Vettel is now putting together statistics that look more ignominious than any worthy accomplishment. This race will be his eighth consecutive where he has failed to make it to Q3, the first time in his career of such frustration.  He will start the race from the 15th position, another mediocre performance in what’s been an ugly 2020.