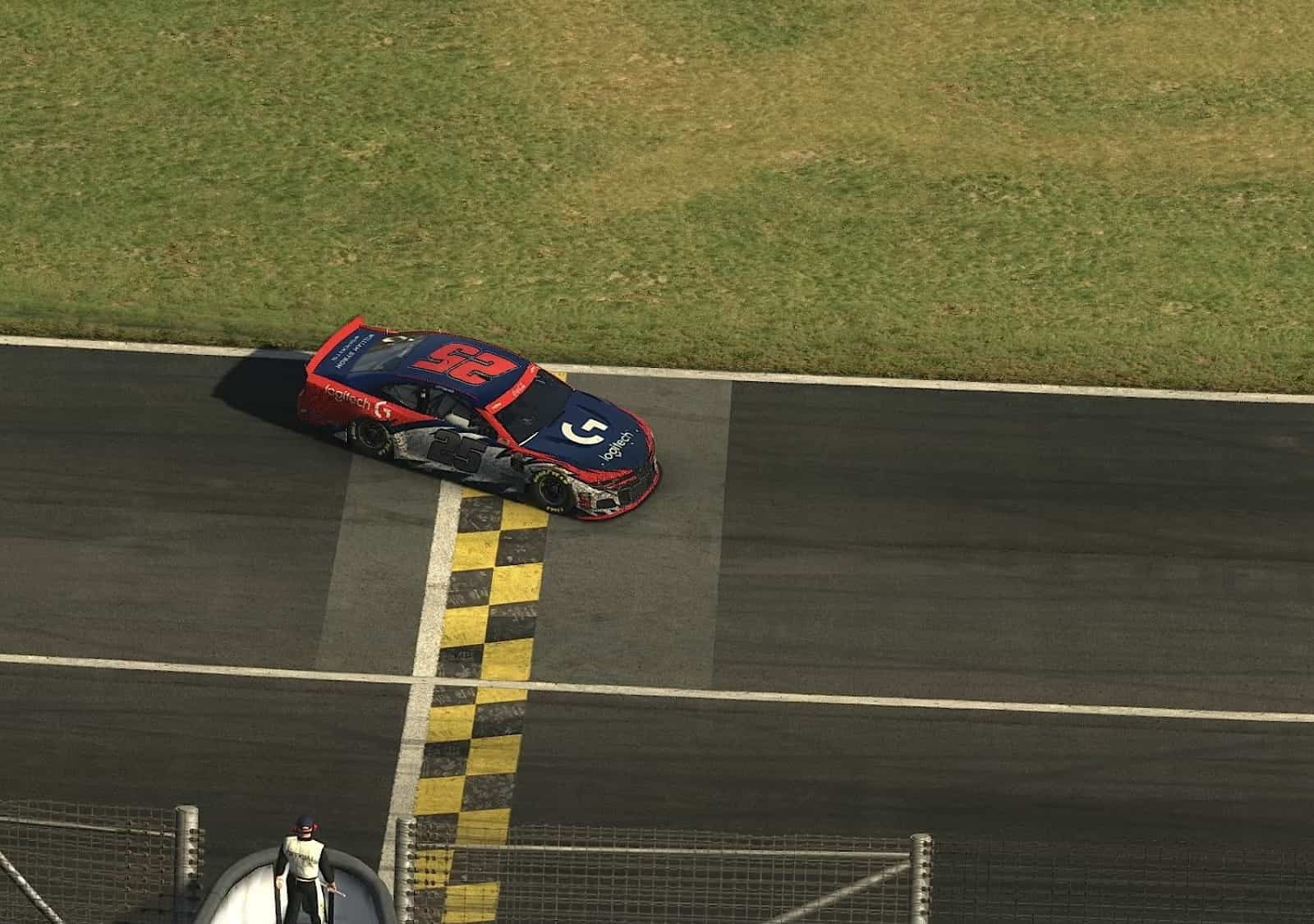 For the first 127 of 134 laps at virtual Kansas Speedway, the eNASCAR Coca-Cola iRacing Series playoff race was a calm, almost serene affair with no cautions and only pit strategy causing any intrigue. But in the ultimate case of cautions breeding cautions, a yellow flag with seven to go touched off a series of incidents that left the presumptive race winner junked and more than one driver apologizing.

When the smoke cleared during the race’s second overtime attempt, Nick Ottinger took the checkered flag and secured his spot in the championship race, even as numerous cars were spinning behind him. The victory was the 16th in the Coca-Cola iRacing Series for Ottinger, boosting him to second all-time.

Logan Clampitt finished second, 0.436 seconds behind Ottinger, with Bobby Zalenski — already part of the Championship 4 thanks to his dominant performance at the Charlotte ROVAL — coming home third. Playoff drivers Ryan Luza and Jimmy Mullis finished fourth and sixth, respectively, with Ray Alfalla and Garrett Lowe right behind in seventh and eighth.

However, no one from that group was a factor for most of the night, and the playoff participant who looked like he was cruising to victory, Keegan Leahy, was left to ponder where it all went wrong.

While Leahy and Ottinger engaged in some battles for the lead in the race’s early stages, it was Leahy’s No. 32 Denny Hamlin Racing Toyota that emerged in front after both rounds of green flag pit stops cycled him back to the point. He got another break when the race broadcast revealed that Ottinger’s pit crew had miscalculated on fuel during his second stop, slowing him to the point where it was Leahy’s race to lose — as long as it stayed green.

Contact between Brandon Kettelle and Justin Bolton on lap 137 meant that it did not. Bolton was incredulous that a collision between cars racing for 27th place would have an oversized impact on the outcome of a playoff race, while Kettelle owned up to what he said was his error.

“I was just so loose, and didn’t even know if I could really pass Bolton, and I threw it in there, and it just didn’t stick,” Kettelle said. “That was all me, 100%. It was just dumb on my part. … I just feel terrible for the rest of the field. I know this is going to turn into a place race finish. I feel bad. I’m sorry to everyone.”

Leahy led most of the field to the pits, with only three cars on a different fuel strategy, headed by Michael Guariglia, choosing to stay out. The race restarted with just two laps to go, but another caution for a multi-car wreck touched off by Corey Vincent and Bob Bryant coming together meant at least one overtime.

That ended up spelling doom for Leahy. As he and Ottinger vied for the same space in the outside lane, something had to give. In this case, it was Leahy’s car heading for the outside wall, dashing any hopes for a victory.

How quickly the tides can turn…

“it just went as bad as it possibly could those last five laps,” Leahy said. “That’s about it.

“I had two seconds on Ottinger, I was winning that race until the caution came out. … I’ll just have to go to Texas and win it.”

On the second overtime restart, Ottinger made a bold move from inside to outside to free himself from being trapped behind the cars on older tires. Not everyone was as fortunate, and multiple cars went spinning on the final lap even as Ottinger’s William Byron eSports Chevrolet headed for the checkers.

“I knew they were on old tires and they were hot,” Ottinger said. “I knew once we got past 20 laps on tires, they’d be difficult if they did anything remotely in [turns] 1 and 2. That’s a lot of hard work from our team. I’m just ecstatic to have a shot this year for William Byron eSports.”

There’s now just a single race left before the eNASCAR Coca-Cola iRacing Series championship race at Homestead on Nov. 2, and as Leahy noted, it’s at Texas Motor Speedway. Coverage begins at 9:00 p.m. ET on Tuesday, Oct. 27 on eNASCAR.com, as well as Facebook.com/NASCAR, YouTube.com/NASCAR and Twitch.tv/iRacing.