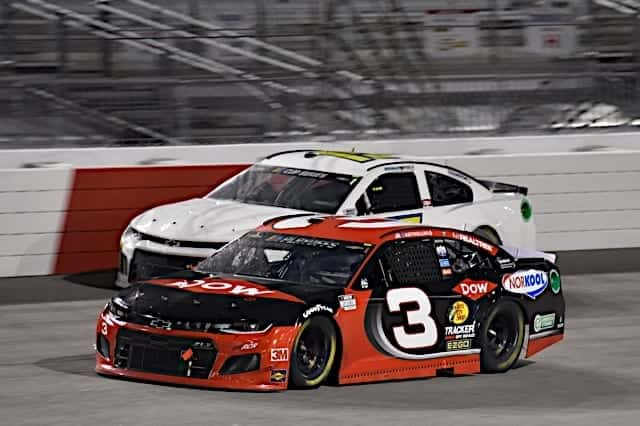 Richmond Raceway is known for tire wear and long green-flag runs. And boy, did we get a ton of that this weekend.

Three of the four national touring races went caution-free in the final stage this weekend. In Saturday’s (Sept. 12) Cup Series race, there were no cautions besides the two stage breaks and the lap 30 competition caution.

But just because there were many long stretches of green flag racing, doesn’t mean it’s a bad thing on a short track. In fact, I was highly entertained with the quality of racing compared to last year at the same track. Plus, race strategy came into play in a major way.

Regardless, there were plenty of stats to dig into.

When the 2020 Cup playoff field was set, I’d estimate 95% of people had Austin Dillon out in the first round. Well, weren’t those people — including myself — wrong.

No, Dillon hasn’t locked himself into the Round of 12, but he’s put together the best two-race stretch of his Cup career for Richard Childress Racing. The No. 3 Chevrolet kicked off the postseason with a runner-up finish to Kevin Harvick at Darlington Raceway last weekend. But before the postseason began, Dillon had Richmond Raceway — the second race in the opening round — circled as a place where he could potentially win.

Many people probably didn’t believe Dillon when he said that. Hell, Dillon even admits Richmond used to be his least favorite track on the circuit … until he figured out. Now the .75-mile track is his favorite.

Dillon lined up third for Saturday night’s race, but in the early laps straight up passed Joey Logano and Harvick — two former Cup champions — for the lead. He went on to finish second in the stage to Denny Hamlin, following that up with a runner-up finish in stage 2, after beginning the stage in the rear due to a speeding penalty on pit road. Chalk up 18 big stage points for the No. 3 team.

In the final stage, Dillon remained a threat for the victory, ultimately finishing fourth, earning consecutive top-five finishes for the first time in his career. He also led 55 laps, which is a new career high. Post-race, he said this was the best car he’s ever had in Cup.

Dillon enters the cutoff race at Bristol Motor Speedway ranked sixth in points, 36 markers to the good. A near catastrophe would have to happen for him to miss the Round of 12.

With the NASCAR Xfinity Series running two races this weekend at Richmond, it marked the final doubleheader weekend of the season. And this weekend belonged to Justin Allgaier.

Allgaier entered the weekend having never won a race at the three-quarter mile short track, though leading 281 laps in his first 18 starts at the track. But how impressive was that No. 7 JR Motorsports Chevolet this weekend? Allgaier nearly doubled his career laps led at Richmond, pacing the field for 213 laps in a 24-hour span, while picking up 12 playoff points in the process, via two race wins and two stage victories.

Plain and simple, Allgaier was stout. By leading 213 circuits, his 2020 total is up to 770, his new career best (previous high was 741 in 2018). Don’t be surprised if that same No. 7 ride shows up to Phoenix Raceway, which would additionally be nice if the team is hunting a championship.

Stats from today's @XfinityRacing race at @RichmondRaceway: @J_Allgaier scored the victory, his third of the season. Dating back to Friday, it's the first time he's won consecutive races.

Through the opening six months of the season, anything and everything kept Allgaier out of victory lane. Teammate wrecking him out for the lead? Yup. Blend-line violation? That happened. Five DNF’s? Uh huh.

Statistically, Allgaier’s season is all over the board. He’s averaging a 13.5 finish (his worst since his rookie season), but is spending time out front. The 2020 Xfinity season has seemingly gone in spurts. Chase Briscoe dominated the spring. Austin Cindric want on a tear over the summer. Maybe Allgaier takes the fall? After all, he’s won three of the past six races.

When the 2020 Xfinity season began, expectations were limited for Our Motorsports. It was making the jump from Modifieds to Xfinity, with Brett Moffitt scheduled for the opening four races of the season.

Those four races — and plenty of solid runs — has turned into running 21 of 25 events.

The team picked up its first top-10 finish in late May at Charlotte Motor Speedway, when Moffitt placed sixth. He’d go on to score his and the team’s first career top-five finish at Talladega Superspeedway, following that up with a seventh-place run at Pocono Racewa.

As the summer months continued, the No. 02 car was typically anywhere from 12th to 20th, failing to finish in three races. But Friday night’s race at Richmond (Sept. 11) was the best the team has been all season.

No, Moffitt didn’t improve on the team’s fifth-place finish at Talladega, but he ran inside the top five for the majority of the night, at one point battling to third, straight up. As the final stage went caution-free, the No. 02 Chevrolet dropped to sixth at the checkered flag, his sixth top-10 finish of the season.

What a night! Can’t thank @OurMotorsports and @TeamChevy enough for their support! P6 with a little team feels amazing to not only myself but to the hard working men and women who give me the opportunity to drive their cars! Thank you to everyone on the team. Another one tomorrow

During the 250-lap race, Moffitt caught the eyes of some NASCAR stars.

Moffitt is one of many underrated drivers in NASCAR that will make any race team better, which leads to …

When fans, media, people in the NASCAR garage think of underrated drivers, many turn away from those competing in underfunded equipment. Why? Because in today’s day and age many of those drivers bought those rides, having their checkbook make up for talent.

But have you seen Timmy Hill?

Hill, 27, has been around the sport for the past decade, fighting and clawing for every opportunity. Making a name for himself in backmarker equipment, the Maryland native had put together some more-than-respectable finishes: placing 14th in the 2017 Brickyard 400, or earlier this year completing all 500 laps en route to a 19th-place effort at Bristol Motor Speedway for MBM Motorsports.

Hill also earned his first NASCAR Xfinity Series top-five finish this season at Daytona International Speedway, making a real charge for the victory on the final lap. He picked up a solid eighth-place finish four months later at Pocono Raceway.

Then there’s the Gander RV & Outdoors Truck Series, where both Hill and his brother Tyler Hill own Hill Motorsports. Together, they’ve been able to manage running a full season thus far with Timmy competing in eight races, Tyler in seven and Gus Dean finishing 26th in the season opener.

On Thursday night at Richmond, Hill crossed the finish line in ninth, making it the first time in his NASCAR career he’s had consecutive top-10 efforts in a single series (also finished ninth last weekend at Darlington Raceway). He also finished fifth in the same No. 56 truck last Fall at Martinsville Speedway.

What a fun night of racing! Back to back top 10 finishes for our No.56 truck team. We beat so many teams on a fraction of a budget. Only Greg Ely, my crew chief, and I work on this truck full time & man its a ton of work but these results make it so worth it! pic.twitter.com/iSBreCl994

Imagine what Hill — and Hill Motorsports — could do should he find the funding to compete with the top dogs.