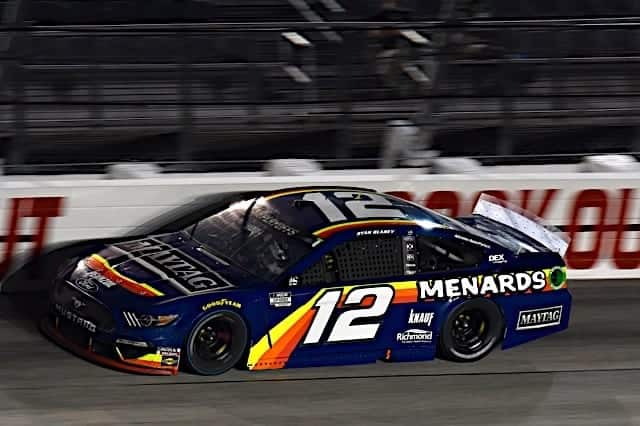 Ryan Blaney was the biggest title contender to have a bad weekend at Darlington. Richmond is one of his worst tracks on the circuit. Has he lost his shot at advancing to the Round of 12?

Luken Glover: I wouldn’t rule him out just yet. He has found more speed at some tracks he’s struggled at in the past, excluding Darlington, but it’s a matter of putting a full race together. Whether it is an issue on pit road, contact on the track, or a freak accident that hurts him, the No. 12 team has been robbed of wins and strong finishes multiple times. Blaney’s best finish at Richmond is a lackluster 17th, so he has his work cut out for him. However, no matter what his luck has been at this track in the past, you can’t count him out at Bristol. Despite a 20.7 average finish, Blaney has led over 400 laps at the track, and has been up front in the large majority of those races when trouble strikes. It will be a tough road, but he is not done quite yet.

Zach Gillispie: Last week, “Zachstradamus” predicted that Blaney was going to be the one playoff driver who was going to surprisingly struggle to make it out of the opening round. Sure enough, he’s already in a substantial hole after the first race, and his statistics at the two race tracks coming up are not on his side. While it may be unpopular to rule him out just after one race, the stats book says he has little to no shot of advancing. Crazier things have happened, but it would now be in Team Penske’s best interest to devote all of their time and resources to their two better-seeded drivers.

Christian Koelle: No, there are too many drivers who will consistently have bad weekends. Blaney’s was just a luck of the draw, honestly. I really don’t think 17 points is much of a hole, unlike previous years where someone leaves race number one with a 20-plus-point deficit to make up. So I believe Blaney will be perfectly fine myself.

Brandon Jones is another Toyota prospect without a clear path to Cup. Does Toyota need more Cup teams to stay relevant in the future?

Glover: The Toyota philosophy of “quality over quantity” has been successful for sure. In three of the past five seasons, the championship has been presented to a Toyota driver. Eventually, however, the manufacturer will need to look at more seats. While one ride at Joe Gibbs will likely have a long-term lock in Christopher Bell, two of their drivers are 39 and 40 years old. With only five full-time seats after Leavine Family Racing closes shop, the long term quality may be affected. It is easier for a Toyota driver in lower series such as ARCA or the Truck Series to leave because other manufacturers give them more opportunities to get to Cup. Drivers like Kyle Larson, William Byron, and most recently, Hailie Deegan all made the switch. With prospects like Harrison Burton, Jones, Christian Eckes, Ty Gibbs, etc. on their way up, Toyota will certainly need to look at their quantity.

Koelle: They will HAVE to have more teams in order to not lose talent to other teams. There is no ifs, ands or buts.

Gillispie: Our own Tom Bowles had a unique perspective on Toyota’s space problem earlier this week and the consequential ousting of former top prospect Erik Jones. Sure, there is currently no room in the inn for both if the Joneses, but let face it: Toyota is relevant as we speak. As Tom points out, the big three at Joe Gibbs Racing are performing at the highest levels and show no sign of retiring soon. From Toyota’s perspective, that is what they want: drivers that win races and championships. Since Jones wasn’t, they have someone in the pipeline to replace him with. In the foreseeable future, if their drivers start retiring, they will have to find the talent to keep them relevant, but so will every other team and manufacturer in the garage. Just because they have an anticipated low car count in the near future compared to the competition does not mean they or any other manufacturer will lose relevance. It just all depends on how they manage the turnover internally.

Richmond marks the third of five night races in a row for NASCAR. Are races at night better for the sport during NFL season or are 1 p.m. ET starts still the right call?

Koelle: Switch it up, give the fans a chance to decide each week what they want to watch. Depending on the track, if the first round is night, make the second day and the other way around. I have said this for years and believe that this is the way to go in the future. I’d also like to see a midweek race attempt during this time, perhaps on a Wednesday night. We’re going to have to change if we want to survive.

Glover: “The night time is the right time!” as Larry McReynolds says. I think it’s definitely better for the sport at this point of the season. With mixed results for ratings between all the sports, NASCAR should have some solid numbers. The night races have already created high action and drama the past two weeks, and I don’t see that changing. Since the race is on NBCSN, the ratings will likely be lower than if it were on NBC, but it shouldn’t be affected too much by other sports. I think it’s safe to say most fans like night races, so not having it clash with NFL should be positive these next couple of weeks.

Gillispie: OK, OK, OK. Football is more popular than auto racing. We hate to admit that, but it is. So naturally, we will see a dropoff in viewership, but here is the thing: Generally speaking, the NFL schedules better matchups on Sunday nights to garner more excitement on the field and more revenue through the TV. In the same way, night racing in NASCAR generally produces better action on the track, which draws in more excitement and viewership. The less exciting NFL games are played early as are the less exciting NASCAR races. Essentially, the leagues are competing on virtually equal excitement levels depending on the start time. So in NASCAR’s case, yes, bring on the excitement of night racing. You might have a bigger competitor, but you get a better racing product in the end.

As the NASCAR Xfinity Series marches closer to its regular season finale, Brandon Brown has a healthy lead on Jeremy Clements for the final playoff spot. Are the top 12 spots spoken for at this point? Is there anyone on the outside that can still make it in?

Gillispie: The playoff field is pretty much set since Clements’ best and possibly only opportunity to close the gap has come and gone. He failed to cut the margin on the three road-course events last month, which is very important since Clements is by far and away a better road racer than Brown, statistically. Compared to the upcoming racetracks before the playoffs, that edge flat out disappears. However, the one thing Clements has going for him is Brown’s reliability problems. This season, Brown has been plagued by numerous mechanical problems and early retirements. If Clements and maybe Myatt Snider (who is right on the edge) can get a solid top 10 with the aid of some all important stage points in the event Brown concurrently goes behind the wall, they will be right back in the conversation.

Glover: Richmond is one of the home tracks for Brown, and he has had some impressive runs on short tracks in the past. Clements has also had some success on short tracks, but I think in the end Brown will lock himself in. With Snider in the No. 93 this week, I think the current playoff field is the one we will see in the postseason.

Koelle: I feel like the field is set for the Xfinity Series because there aren’t really any drivers that could win, pending a giant one takes out the field. I am glad to see two underfunded teams going into this playoff. Alex Labbe is about the only other driver that I believe could do something miraculous at Bristol and Josh Williams has been a real big threat this season, so who knows, it’s 2020.

I wouldn’t count Blaney out yet. The one thing I’ve noticed the last several years with this format is that all the contenders are so focused on winning that they do stupid things (Truex taking himself and Elliot out last week). Especially in the early rounds. All most of the favorites need to do is 3 top 10s in the first round but they can’t help themselves. Blaney is definitely in a bad spot right now but let’s wait until after Richmond before we count anyone out. With stage points he could wipe most of his current deficit out by the end of the 2nd stage (or fall much further behind).

If the performance of his pit crew is any indicator, Blaney is toast. He’ll have to win his way to the final four…