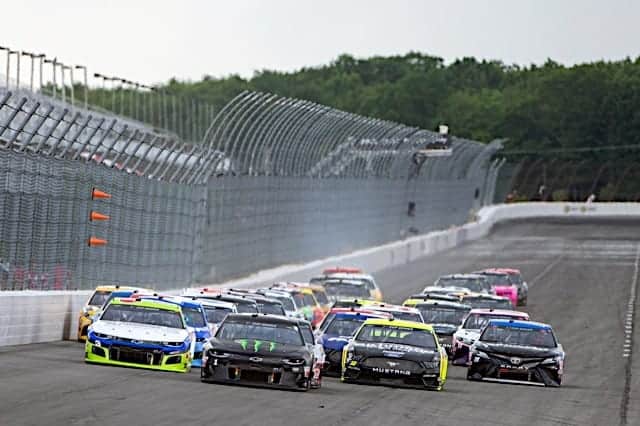 Quite a few people, famous and otherwise, took to social media over the last week and a half to say they were giving NASCAR their first real shot heading into Talladega Superspeedway. Some of them might even have come back for more after the GEICO 500 turned out to be a thriller, with Ryan Blaney barely hanging on for the narrowest of victories. After 50-plus lead changes, those newcomers got quite the taste of what NASCAR can be like at its most exciting.

Imagine their disappointment, then, to tune back in this past weekend for either of the Cup Series races at Pocono. Despite shortened race lengths and the novelty of the first ever doubleheader at the same track in the same weekend, the result was anything but compelling. The only people who were thrilled by what went on at Long Pond were Kevin Harvick and Denny Hamlin, who nabbed a win apiece to pad their playoff point totals.

While fully acknowledging the unique challenge posed by Pocono’s three different corners and long straightaways, the current rules package just isn’t cutting it. And it’s not like fun racing is impossible there, because the Xfinity Series race fit that description. The Cup cars just have too much trouble running down drivers ahead of them and even more difficulty passing if they do. Add in the fact that fuel mileage was a major factor even at the reduced distances and the result was a whole lot of meh — with the exception of restarts, which currently are the track’s only saving grace.

Someday one hopes the powers that be will find the magic formula to spice things up at the Tricky Triangle. Until then, a mea culpa to any new fans who found it a dull follow-up to the superspeedway spectacle. Please stick around, because it gets better.

2. Too Much Racing in One Weekend?

NASCAR has had to tinker quite a bit with just about everything on the fly this season, but the Pocono weekend schedule was always intended to be packed. Five races in three days sounds amazing on paper, and if fans would have been allowed at the track, they definitely would have gotten their money’s worth.

It almost didn’t work out that way. Rain forced the Gander RV & Outdoors Truck Series race to move from Saturday to Sunday, setting up an unprecedented tripleheader with all three national series competing on the same day at the same track. That schedule also got dicey thanks to lightning and rain which seemed to come close to moving the second Cup race to Monday.

No big deal, right? Cup races get moved on a semi-regular basis. But what if the rain had continued further into Saturday? You may recall Pocono has no lights (or maybe you asked Bob Pockrass on Twitter), so a night race was not an option. Bumping both Saturday races to Sunday would have meant moving one race to Monday right away, which is suboptimal.

The lack of fans was actually a plus in this case as no crowd logistics had to be taken into account, but the whole thing makes one wonder if there’s a tipping point somewhere in terms of race weekend schedules. Four races in three days isn’t that uncommon. Five over that same period of time and you’re basically gambling on perfect weather. It will be interesting to see if NASCAR tries anything that ambitious in 2021.

3. Is Team Penske the Team to Beat Right Now?

You wouldn’t know it following the Harvick and Hamlin show in Long Pond, but at just slightly past the halfway point of a very unusual regular season, it looks like the most complete team in the Cup Series garage isn’t Stewart-Haas Racing or Joe Gibbs Racing. It’s Team Penske that deserves that honor, with all three drivers looking like potential title contenders.

For starters, Penske is the only team with three cars locked into the playoffs, as Brad Keselowski and Joey Logano both have multiple victories to go along with Blaney’s Talladega triumph. Only Hamlin and Martin Truex Jr. have won so far at JGR, and Harvick has been a one-man show for Stewart-Haas. Yes, the gap between the haves and have-nots at the Cup level means all 11 drivers across the three teams will likely make the playoffs, but without wins, it’s hard to count anyone as serious championship material.

(And yes, Kyle Busch will figure out the way back to victory lane sooner rather than later, as he’s simply too good to struggle for too long.)

Consider, too, that Penske has already won at short tracks, intermediate circuits and superspeedways. They aren’t looking for answers anywhere right now, and that makes them the top team until someone else proves differently.

4. Why a Blaney-Rowdy Feud Could Be Fun

The continuous showing of the excellent Unrivaled: Earnhardt vs. Gordon documentary during this season’s seemingly endless string of rain delays only drives home the idea that there just aren’t rivalries like that in the sport today. It’s more of a week-to-week thing in the modern Cup Series, with racers largely concerned with who’s wronged them most recently.

Still, there’s always a chance that any on-track dust-up could leave lingering feelings for weeks to come, which is why it was so intriguing to see Blaney and Busch get into it during the second Pocono race. Or to be more precise, it was strangely interesting because we almost didn’t get to see it, with FOX needing to rely on NASCAR’s ENG cameras to capture the moment.

It’s likely that this will go the way of most of today’s temporary beefs, but it might be good for the sport if it stuck around. Consider that Busch loves speaking his mind and wearing the black hat, though he has a huge following that cheers him on even while others boo him. Blaney is generally a lot more laid back, but he’s not afraid to say what he feels when necessary and definitely isn’t one to back down. He’s also on the rise, whereas Busch is at the point in his stellar career where he’s an established superstar.

This just feels like it could have all the makings of a dynamic rivalry. Here’s hoping they don’t forget what happened at Pocono.

With all due respect to Indianapolis Motor Speedway and Kentucky Speedway, the NASCAR All-Star Race went from “why are they even having it this year?” to “hey, I need to remember that date” in a hurry once the venue shifted to Bristol Motor Speedway. No disrespect intended to Charlotte Motor Speedway, but the contortions that NASCAR went through year after year in terms of rules packages and formats to try to inject some life into the event tells you all you need to know about what the event has been missing.

The regular season Cup stop at Bristol suggests that no hijinks should be necessary to turn this year’s races (plural, since we’re including the Open) into something worth watching. Just get them out there, maybe put some traction compound down and let them have at it with no worries about points.

Can’t wait — and it’s been a long time since you could say that about the All-Star Race.

Give the drivers real race cars and get drivers who want to “race”.

What will it take to get Pocono right?

One would argue that the fuel mileage issues salvaged what was some pretty bad parade racing in the 2nd race. But then again I don’t have a problem with fuel mileage races. It takes a special talent to save fuel in order to be able to win the race.

Would I would be more concerned about is the fact that the Cup series is being dominated by the veterans. I have always felt that team owners rush these rookies up to the Cup series way too soon. I realize its a good cost savings than having to pay big bucks for a Cup veteran, but the results just aren’t there and guys like Hamlin and Harvick are having a field day.

Agree 100%. Seems like half of these guys are in and out of a top flight cup ride and labeled “damaged goods” before the age of 25. Erik Jones is about to be the odd man out next. William Byron will soon follow if he can’t start winning.