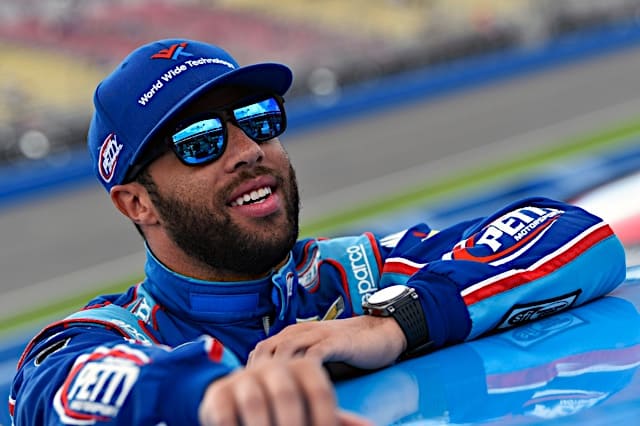 Thankfully, race weekend is here, which means cars will be on track at Pocono Raceway and the insanity of the past week can take a pause.

Never have I been so ready to put a week in the past.

The rollercoaster of emotions since Sunday’s reported noose in the Talladega Superspeedway garage stall of Bubba Wallace has simultaneously been draining, frustrating and relieving.

We know the timelines of how everything developed, when it was announced and what happened. That doesn’t seem worth delving into once again.

But it is hard to ignore the most glaring mistake NASCAR President Steve Phelps made in its handling of the situation – leaving no room for any other interpretation than the noose being the result of a “heinous act” and a racist threat against the Cup Series’ lone black driver.

The emotions and strong condemnation of racism or anything of the sport that Phelps displayed were and remain admirable. He is clearly proving that he is trying to move the sport forward and make it as inclusive as possible.

And yet, at the end of this saga, it feels in a way the sport took a step or two backward.

Certainly the unity that was displayed Monday (June 22) at Talladega was genuine, impactful and appears to be long lasting. But NASCAR’s credibility, and sadly that of its media partners, has wavered at best, tanked at worst.

There was no hoax or conspiracy theory. The rope was fashioned into a noose, as the FBI continues to describe the knot, and it has been tied that way since October 2019. As has been stated elsewhere, it is beyond fair to question why it was tied that way then, who did it and why it wasn’t addressed in October before this became an international story.

However, by immediately and emphatically stating that the noose was the product of a targeted hate crime, Phelps unintentionally gave more ammunition to those who called foul play. To his credit, he admitted that.

“Upon learning of and seeing the noose, our initial reaction was to protect our driver,” Phelps said Thursday (June 25). “We’re living in a highly charged and emotional time. What we saw was a symbol of hate and was only present in one area of the garage, that of the [No.] 43 car of Bubba Wallace. In hindsight, we should have, I should have used the word ‘alleged’ in our statement.”

That one word – alleged – would have at least provided a cushion, a window for the possibility that this rope was not indeed the product of a crime. Instead, that wasn’t included, and emotions got the best of the sanctioning body.

“I’ll go back to the emotion of the moment and I’ll take responsibility for that,” Phelps said. “And should we have toned that message down slightly? Maybe we should have. And I’ll take responsibility for that. I stand by the actions that we took and I think they were the right ones. And as I said before, given the evidence that we had, we would do, we would do the same thing, we would investigate it the same way.

“If it comes to where we need to craft a statement differently, and I need to take a little less emotion out of it, that’s something I’ll do, I’ll take responsibility for that.”

For now, the damage has been done.

And that brings me back to the original question – how do we and NASCAR move on from all of this?

We do so by getting cars on track. Pocono Raceway is hosting five races in a three-day span (as long as Pocono’s notoriously erratic weather cooperates and doesn’t make it a four-day weekend).

That overload of racing – no matter the quality – might just be enough to help us forget how tumultuous these past five days have been. We can only hope, can’t we?

The Cup doubleheader will be fascinating to watch. Will drivers conserve their equipment at all on Saturday since they will be required to drive the same vehicle Sunday? Will a restart wreck force others to backup cars?

There will be plenty of storylines to follow all weekend. Unfortunately, they may still be overshadowed by Phelps’ missing word from NASCAR’s initial statement.

Wood brother crew member was in one of the pics SUNDAY. He said rope has been there since at least 2019 (there is video out now that is was there in 2017). So they knew Sunday it had been there since at least 2019 and still continued on with the hoax. My question is how did it escalate from local LE to the FBI. Did local LE know this was a crock of chit and call in the FBI?

In my case, I don’t know if they can. I’ve been personally defunding Nascar for 5 years now because of poor tracks, poor racing, poor management, poor driver attitude and poor tv announcers. Never gave up on them and always kept track of things going on because I did love it at one time. About time I was thinking of buzzing down to Phoenix for the last race, this comes up. It seems with me and Nascar it’s always 1 step forward and 10 steps back. Oh well. I hear my granddaughter calling. We have a mean game of hide and seek going on.

who knows! just tired of it all.

be real interesting to see if texas will still allow 25,000 fans in the stands since the cases of virus are increasing.

So is it illegal (i.e. a hate crime) if you tie a rope into a noose type knot now?

It’s hard to keep track of all the rights I am losing day by day.
Can’t fly a confederate flag, can’t make a noose knot…. check.

I had no inclination to do either but I don’t want to end up in trouble.

The photo that was released by Nascar yesterday was taken in the rain. That means it was taken on Sunday. We saw the teams arriving Saturday afternoon on TV. 2 races were run on Saturday and it didn’t rain. Since the photo shows wet ground, the noose didn’t bother anybody on Saturday. It only became a problem on Sunday. Therefore the team had plenty of time to cook up this story. The previous photos show the rope over to the side, against the wall The photo released shows it moved away from the wall towards the outside.

Look real close at the picture Nascar released of the noose. Behind and to the right is a wall indicating an end stall. Bubba was in stall 4 which does not have a wall in between it and stall 5. Nice try to CYA nascar. maybe next time you cook up a phony picture, you could at least take it in the proper stall. BUSTED

Bring Brian back It’s been the same since he left anyway. It won’t be worse. Even the WWE wouldn’t be this suicidal.

All of this happened under Steve Phelps watch he needs to be FIRED, he has shown he is not the right person to be leading NASCAR,