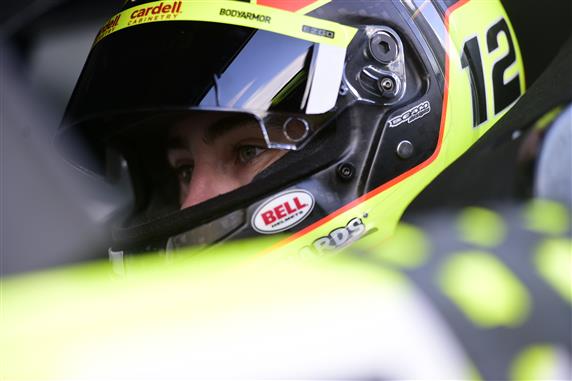 Ryan Blaney rebounded from multiple incidents on Wednesday night to finish second under the lights at Martinsville Speedway.

Martin Truex Jr. won NASCAR’s midweek race at the paperclip-shaped short track, but the big story of the night was Blaney, who started on pole for the Blue-Emu Maximum Pain Relief 500. One incident of being lapped, a pit-road penalty and 34 laps led later, Blaney brought his No. 12 Cardell Cabinetry/Menards Ford Mustang home in second.

The No. 12 was one of the many drivers who immediately began dropping through the field. As the green flag dropped, Blaney initially battled with Aric Almirola for a few laps and was in second when the race resumed after an early caution.

But as Team Penske teammate Joey Logano quickly seized the lead and drove away after the restart, Blaney plummeted down the running order as the 60-lap sprint wore on – losing 17 spots by lap 45. Logano cut through lapped traffic, putting all but the top 18 cars a lap down by the time the competition caution flew at lap 60.

Blaney’s frustration was evident, even flipping the bird at Logano when the No. 22 put him a lap down. The Ohio native’s night only got worse when his crew was tagged for a penalty on pit road after one of his crew jumped over the wall too soon.

Then, just as quickly as Blaney’s night turned sour, it began to lean positive again. The No. 12 worked its way back towards the front, seeming to have found the right setup. He was the runner-up in the second stage behind Jimmie Johnson, battling with the No. 48 for the lead on the restart and ultimately taking it. Blaney led 12 laps before Logano reappeared in his mirror and passed him, but he pushed back to lead another 22 circuits.

After some more shuffling throughout the field, Logano and fellow Penske driver Brad Keselowski fought each other tooth-and-nail for second behind Truex, who began to check out. Blaney used the opportunity to wear down both teammates and bounce back to second. But he had used up his tires and so couldn’t close on Truex. The No. 12 finished second, 4.7 seconds out of the lead.

“We were awful, one lap down in the first 60 laps, that’s bad,” Blaney said with a laugh in his post-race interview. “Luckily, we got the car a lot better even on the first stop … got the lucky dog and really drove up through there [to] run second in the second stage. …We had a penalty on pit road, [so] proud to come back up through to second.”

“Would’ve loved to restart up front with Martin,” Blaney added, “to see if I could race him. He was pretty good.”

The runner-up effort is Blaney’s fifth top-five finish of the 2020 season, tying his result at Daytona for his best of the year. He finished fourth at Atlanta Motor Speedway last weekend, atoning for the previous week at Bristol, where he came home dead last after an early crash.

“Couple solid runs here we got [strung] together,” he said of the past two races. “[We] just need to break through and hopefully we can do that soon.”

Blaney returns to the track this weekend for the Dixie Vodka 400 at Homestead-Miami Speedway. Blaney and the rest of the Cup Series field will take the green flag shortly after 3:30 p.m. on Sunday, June 14.