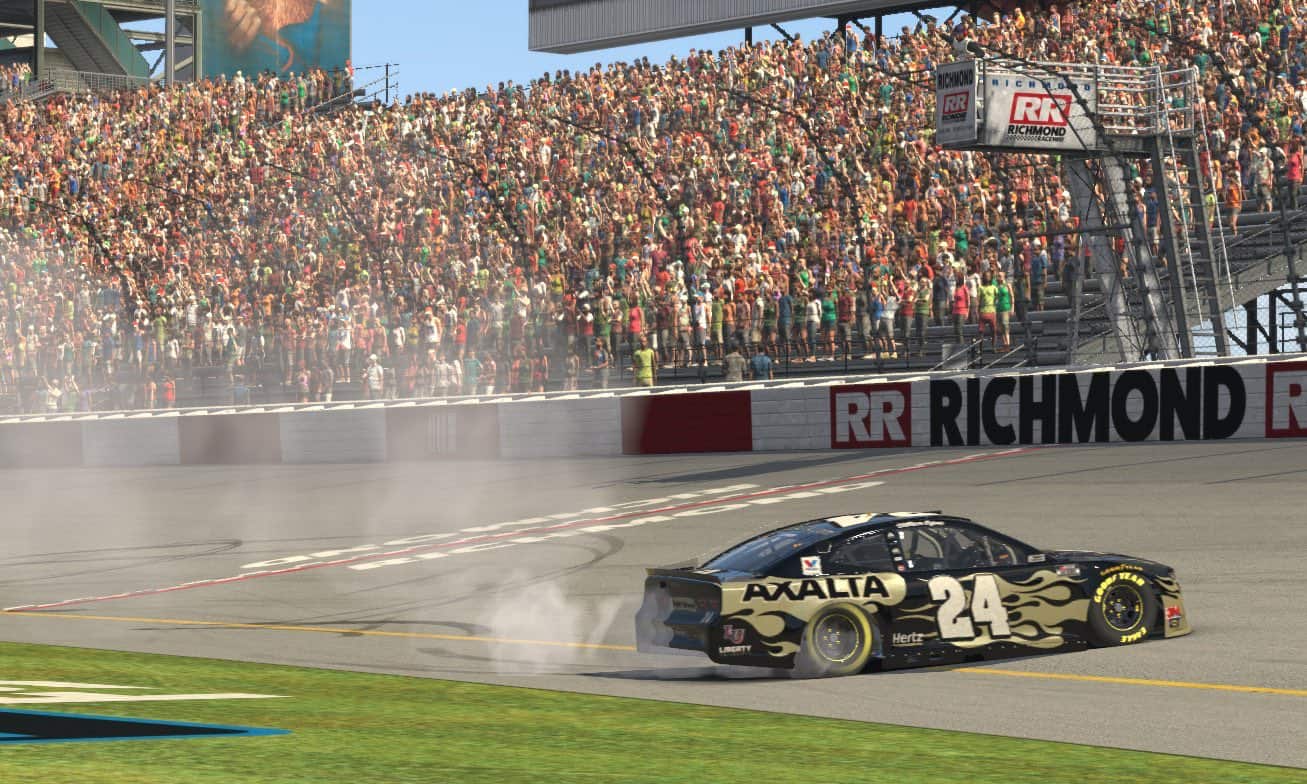 Byron, driving his familiar Hendrick Motorsports No. 24, took the lead on lap 60 after starting third and never looked back.

With no on-track action due to the coronavirus pandemic, iRacing shows there are a few sports we can still watch. The virtual event took place on the same day Richmond’s actual Cup race would have happened.

Ryan Preece qualified on the pole with Landon Cassill on the outside, and the field took the green flag after Joe Gibbs gave the invocation, Rascal Flatts sang the anthem and Kelsey Grammer gave the command to start engines.

After a few small crashes brought out early cautions, the drivers settled into a rhythm. FOX Sports in-race analyst Clint Bowyer started last, was caught up in a crash early on and later forced to exit after his engine expired.

Preece led 59 laps before Byron passed him on the 60th circuit.

Brad Keselowski began to move his way up through the field, passing Dale Earnhardt Jr. and Preece for fourth and third, respectively. Preece continued to fade, giving up that spot after surrendering second to Hill.

Byron, Hill, Preece and Earnhardt Jr. made up four of the top five spots for much of the event, but late-race shuffling would break that quartet up. Byron led at halfway as NBC Sports reporter Parker Kligerman worked his way up into the top five.

Preece lost spots later on as his car faded, eventually getting spun by Matt DiBenedetto. Preece retaliated, spinning the Wood Brothers Racing driver back, but DiBenedetto returned the favor by crashing into Preece. The fracas resulted in DiBenedetto getting parked by iRacing for the remainder of the event, mirroring the consequences Daniel Suarez and Kyle Larson faced two weeks ago at Bristol.

Suarez and Garrett Smithley tangled on the frontstretch with 24 laps remaining, both crashing hard but failing to bring out a caution.

Erik Jones began to cut his way through the field, but was held up battling with Christopher Bell, eventually passing the No. 95 but too late to close in on the leader.

With less than 10 laps remaining, the Big One finally struck. Bell and Tyler Reddick got together coming out of turn 2, leading to Bell spinning up in front of Alex Bowman. Bowman was then clipped by Ryan Blaney, who spun down to the bottom of the racetrack. Blaney made additional contact with Bell and, after deciphering as much as possible from screenshots and commentary, Bell was hit by Blaney and went airborne, flipping onto the frontstretch.

After the dust and debris had settled, the field took the green flag with two laps to go. Byron led the field to green with Timmy Hill right in his wake, but was able to hold off Hill’s dives into the corners to win the race.

“I wasn’t in a racing family growing up and this was my avenue to cut my teeth,” Byron said of iRacing in his post-race interview. “[It’s a] much different way than other guys grow up … I feel like in my generation it’s pretty normal, but I’m very thankful for what it’s done for me.

“We were able to get good exits off the corner,” he added. “And have a pretty decent restart and get the win. … I’m having a lot of fun with it.”

Byron said he and his crew chief practiced the potential situation of Hill getting to his bumper prior to the race, after Hill moved him for the win at the virtual Texas Motor Speedway.

“[My crew chief] was beating my bumper off in practice,” Byron said. “I was prepared to hold the brake when [Hill] got there.”

The Pro Invitational Series will head to Talladega Superspeedway next weekend, with the race scheduled for Sunday, April 26.