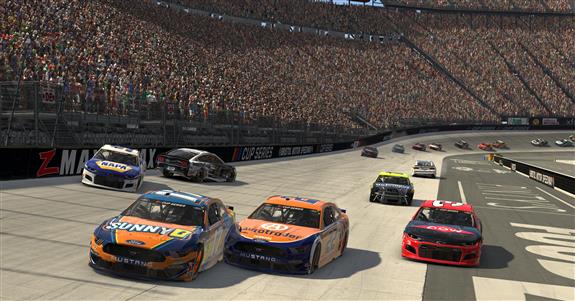 The fourth race of the eNASCAR iRacing Pro Invitational Series is at virtual Richmond Raceway. Coverage of the Toyota Owners 150 begins on Sunday, April 19 at 1 p.m. ET.

Also, Saturday Night Thunder will continue this week and throughout the length of the Pro Invitational Series. Competitors will use NASCAR Xfinity Series cars. NASCAR Cup Series drivers not entered in Sunday’s race can compete in this one.

Just 26 drivers will compete in Sunday’s event, including many Cup Series regulars and a few invitees.

Ross Chastain continues in the No. 6 car of Roush Fenway Racing. Garrett Smithley, Timmy Hill and Parker Kligerman will drive Nos. 51, 66 and 77, respectively.

Kevin Harvick will drive the No. 4 for Stewart-Haas Racing in his first appearance in the iRacing Series.

Dale Earnhardt Jr., who competed in the three previous events, is not currently entered in this race.

Unlike previous races, there will not be any qualifying races or heats to set the field or lineup. Drivers will have one reset to repair any damage that might they might incur.

The Toyota Owners 150 will air on Sunday, April 19 at 1 p.m. ET on Fox Sports 1, the Fox Sports app and on FOX in select networks. Saturday Night Thunder will be on eNASCAR.com/live and NASCAR’s YouTube channel at a time yet to be announced.