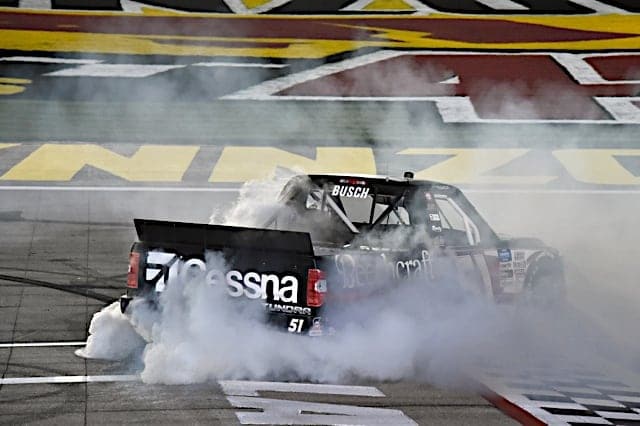 When Tanner Gray joined DGR-Crosley full-time this year, he had just three starts to his name and then crashed out to a 23rd-place finish in the season-opener at Daytona International Speedway.

“I was disappointed in the way my first few truck starts went,” he said about 2019. “I felt like we were better than what we showed. I want more and I think the truck is capable of more.”

Fast forward to Las Vegas and he’s walking away with a career-best finish.

“I feel like I’ve struggled a little bit on the mile-and-a-halves as far as racing and being there at the end of a run,” Gray explained. “All in all it feels good; we overadjusted on the last stop and got it a little too free.”

For Gray, it’s a step in the right direction in his first full-time year in the series. But perhaps what’s more important is that he’s still working on his transition from winning the 2018 NHRA Pro Stock championship. And based on what we’ve seen in his first five Truck Series starts, Gray is one to keep an eye on throughout the 2020 season.

Sheldon Creed‘s Las Vegas Motor Speedway result may show a 10th-place finish, but that doesn’t begin to tell the story of his race. As one of the only drivers to show anything even remotely close to challenging eventual winner Kyle Busch, Creed battled hard with the two-time NASCAR Cup Series champion before ultimately getting loose and chasing his truck up the track… twice.

“I got to the point where I could run wide open behind him,” Creed said. “But Kyle’s so good, so smart, that I every time I almost got clear, he’d pull me right back. I could feel myself getting freer and freer and I knew I if I wasn’t careful I was going to get loose, and I ended up getting loose underneath him and lost a few spots.”

Just like the previous restart, @sheldoncreed is giving @KyleBusch a run for his money!

Get to @FS1 to see the action! pic.twitter.com/m4J8xEN4xu

For Creed, it’s a tale of how far he’s come since the beginning of his rookie season. A year ago, he raced overly aggressively and well over his head and the ability of his trucks. As 2019 wore on, though, you could see the maturity shine through from the rookie, and it appears he’s picked up right where he left off.

As for his 10th at Las Vegas? It’s a confidence booster for the sophomore driver, who’s “been working so hard on my craft this year, in the gym and in general.

“It’s nice to see that my racing is getting better and I battled for the lead with one of the best. Got some work to do in the shop with our trucks.”

SEGAL: CREED THINKS THAT THE WINS ARE NEAR

Number of Rookies in the Race: 8

Crazy night, first time on a mile and a half in a truck. Made some mistakes on my part, came from the back multiple times and brought home a P6 finish. Thanks @Cosmopolitan_LV pic.twitter.com/xoOYpPBoad

P12 tonight. We’d drive from the cheap seats to right outside the top 10 at the end of each stage. Just to have pit road miscues and go all the way back to 25th+. Passed apt of trucks and came home without a mark. First race for SDM wasn’t the best but wasn’t the worst. On to ATL

Made a mistake early and caught the wall?? but we will keep our heads up and move onto Atlanta! @BMR_NASCAR brought a fast @ToyotaRacing Tundra! pic.twitter.com/sybv2xxMGz

Dang that was a tough one. Proud of everyone at @NieceMotorsport! We’ll be better at @amsupdates! Huge thank you to @iRacing. Sure meant a lot to me to have them on board. We have a lot to look forward to this season! #PressTheAttack ?? pic.twitter.com/yKUXHHOCP4

Great @safelite Tundra tonight. Restart performance was poor on my end and put me in a position to get put in the fence, end of story. I’m ready for Atlanta already, hungry.

A race incident on lap 90 ended our night earlier than expected at @LVMotorSpeedway. The Toyota Tundra #4 was fast and lap times were getting better and better every lap!
Stage 1: P6
Stage 2: P8
Thanks to the #4 team ? pic.twitter.com/0fOKyp1TE7

Points Update: Austin Hill is the new point leader after a quiet third-place finish. Johnny Sauter sits nine points back after gaining one position. Ben Rhodes, who jumped 16 spots after a fifth-place finish is third, followed by Brett Moffitt. Sheldon Creed rounds out the top five.

Zane Smith jumped six spots to sixth and is followed by Daytona winner Grant Enfinger, who dropped six positions after a 31st-place finish. Christian Eckes, Todd Gilliland and Codie Rohrbaugh round out the top 10.

Up Next: The Truck Series takes the next two weekends off before heading to Atlanta Motor Speedway Saturday, March 14. Coverage begins at 1:30 p.m. ET on FOX Sports 1; the race can also be heard on your local MRN affiliate or SiriusXM NASCAR Channel 90.

I no longer bother to watch either Truck or Xfinity races when KyBu is running. No joy in watching him roll over the regulars and rob points and $ from them.