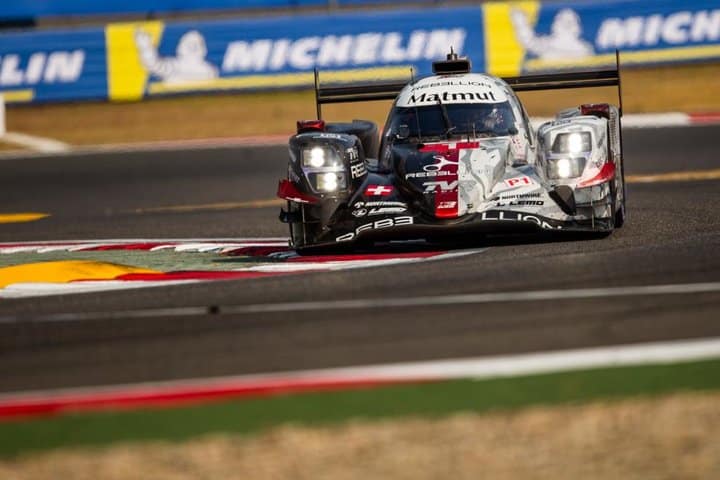 Nato and Senna’s average lap was one-seventh of a second faster than Team LNT’s No. 5 Ginetta of Ben Hanley and Charlie Robertson.  The factory Toyotas will start on the second with the No. 8 of Brendon Hartley and Kazuki Nakajima out-qualifying the No. 7 of Mike Conway and Jose Maria Lopez.

The five LMP1 cars were separated by just over nine-tenths of a second.  This is the closest LMP1 field since the 6 Hours of Shanghai in 2017.

LMP2 saw United Autosports’ Paul Di Resta and Phil Hanson‘s laps average out to 114.912 mph, good enough to claim the class pole and sixth overall.  The average time was a shade over two seconds off the overall pole, while Di Resta’s fastest lap was just a few tenths of a second off of a couple of the LMP1 laps at speed.

United Autosports’ No. 22 ORECA 07-Gibson was nearly three-tenths of a second faster than Jackie Chan DC Racing’s No. 37 for Gabriel Aubry (in his final race in the No. 37 for now) and Will Stevens.  G-Drive Racing’s Jean-Eric Vergne and Job van Uitert were third quickest in their rebadged Aurus 01, while JOTA Sport’s No. 38 for Anthony Davidson and Roberto Gonzalez was fourth.  Cool Racing’s Antonin Borga and Nicolas Lapierre were fifth.

In GTE-Pro, it was more or less line astern in qualifying.  Porsche GT Team swept the front row with Gianmaria Bruni and Richard Lietz combining to average 104.834 mph to win the class pole.  Teammates Michael Christensen and Kevin Estre were six-hundredths of a second behind in their Porsche 911 RSR-19.

James Calado and Alessandro Pier Guidi qualified third in their Ferrari 488 GTE for AF Corse, but they were more than half a second off of the Porsches.  Teammates Davide Rigon and Miguel Molina were fourth.

GTE-Am saw Team Project 1’s No. 57 Porsche shared by Ben Keating and Larry Ten Voorde claimed the class pole with an average lap at 102.947 mph.  The lap was six-hundredths of a second faster than Dempsey-Proton Racing’s No. 88 Porsche for Khaled Al Qubaisi and Thomas Preining.  AF Corse’s No. 83 Ferrari for Nicklas Nielsen and Francois Perrodo qualified third, while Matteo Cairoli and Egidio Perfetti qualified the No. 56 Porsche for Team Project 1 fourth in class.

Two teams failed to set times with both of their nominated drivers.  Those were Aston Martin Racing’s No. 97 in the GTE-Pro class and AF Corse’s No. 54 Ferrari in the GTE-Am class.  Those teams will lineup at the rear of the field.