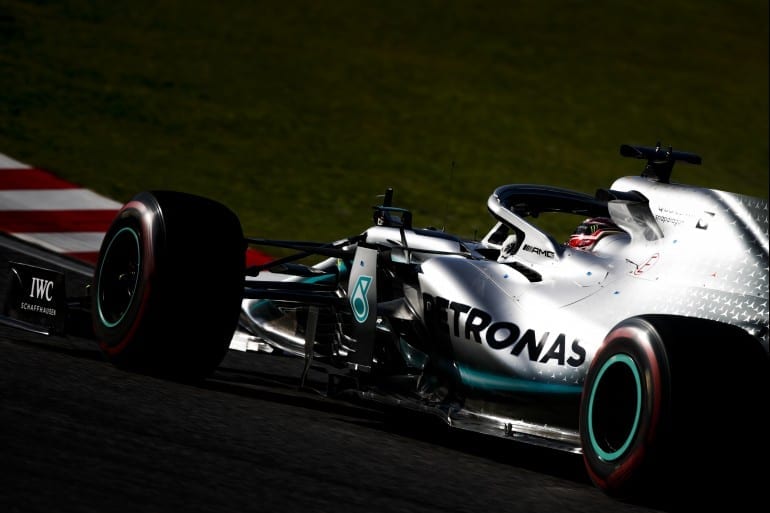 Lewis Hamilton on track at Suzuka this past weekend (credit: FIA images)

Lewis Hamilton finished third in the Japanese Grand Prix this past weekend in Suzuka, Japan. Drivers not named Lewis Hamilton would be rather pleased with that result and might even regard it as something worth celebrating. Of course, as he has proven with regularity, Hamilton is not like most other drivers.

If anything, he continues to let more of himself be shown to the world, and it is a fascinating study of a person who is enormously privileged and substantially burdened. He is a man who lives his life in the public eye and offers himself through social media for anyone to explore. His Instagram account currently lists his followers at 13.1 million, which is no paltry number.

Because of his position and his overwhelming presence in the sport of Formula 1, there is little he does that does not get noticed. That he has his own fashion line is probably one of the more easily ignored aspects of the five-time champion.

He is on his way to a sixth title this season, leading the standings by 64 points over his teammate Valtteri Bottas with four races to go.  For Hamilton to botch cruising to the 2019 championship, he would have to fail to score points in three of the races and Bottas would have to win all four. The likelihood of that happening is somewhere around the chance of the next race being run with cars powered by fairy dust. Just give him the trophy already.

For a person who seems to have it all, however, Hamilton seems to be on the touchy side, possibly drained or more. In a recent Instagram post, Hamilton gave all indications that he is conflicted and worn down and is now positioning himself in a rather contrarian way to the sport he loves. 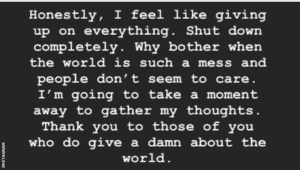 The post, which has not been deleted, offers an interesting view into a number of things. Let’s pick it apart for a moment.

The sense of frustration that Hamilton is airing is intriguing. As many world leaders seem to be acting unreliably and problematically, there is reason to have less faith in governments. While President Donald Trump may be one such character that would cause Hamilton to feel this way, England’s Boris Johnson is proving himself to be a bit of mess as Prime Minister. Seeing how Hamilton has such a strong affinity for the U.S. and is also a British citizen, he may be feeling overwhelmed by the current political climate.

And climate is a big thing he’s addressing, as more and more data indicate that the planet is in rough condition and that work needs to be done to ensure it regains its health. Hamilton seems to be embracing “green thought” and new ideas of about life in a rather strong fashion.

Not only is he a vegan, but he is also a restaurateur with sustainability in mind, having opened Neat Burger in London, an eatery focused on plant-based foods. Whether or not you agree with Hamilton and feel just fine eating meat, what is so curious is how his green views jive with what he does for a living — he is, after all, a racecar driver.

One thing that has barely changed about motorsports is that, on the whole, it is wasteful. It wastes fuel. It wastes oil. It wastes rubber. And as a whole, it probably has a rather terrible carbon footprint. Motorsports is not a green convention, even if Formula E has sought to challenge some of the notions with battery-powered cars. Even F1’s desire to seem more green with hybrid engines or NASCAR’s switch to ethanol does little to actually have an impact or change anything.

Hamilton is at once the prominent face of F1, yet looks to be avoiding how to handle the challenge in front of him. That would likely be because he is smart not to bite the hand that feeds him. Without F1, he isn’t able to have the impact he desires.

Maybe that’s why he’s taking such a peculiar position of apathy in his post like everything is screwed and nothing can be done. Maybe what is really at play has more to do with his generation and their view of the world, that even the strongest of their voices feel silenced, that they are fighting an unwinnable battle, that the environment, war, neo-liberal capitalism and problematic healthcare have conspired to make a person feel as though they cannot carry the weight.

Just as important is the platform that Hamilton uses. Instagram, Facebook, Twitter, Snapchat or whatever else people are using these days — they all allow opportunity for comments, and Hamilton has faced this all too many times. It hasn’t been uncommon for him to endure racism through the responses his posts, no matter how curated sites get.

Social media has become a morass of either over-indulging love or animalistic hate, with very few seeking middle ground. Look no further than the suicide of Korean actress and singer Sulli, age 25, who committed suicide this week due to extreme responses to her online life to find out what the results of cyber-bullying and hate can do.

What all of this really seems to indicate is that everything is too much. William Wordsworth wrote that, “the world is too much with me,” alluding to having no way of escape, that we all need a moment of peace to breath. It looks like Hamilton is finding out that he too needs a moment. The more that our stars, in whatever field, fail to sign off and dropout, the more we risk losing them in one way or another.

life has it’s ups and downs.

must be nice to have so much and still not be happy. walk a mile in someone else’s shoes.

Cheer up Lewis, it could be worse. You could be dirt poor like the rest of us and still feel that way.

Ava Ladner must be smoking some weird stuff on Oahu. This article is a bunch of PC drivel. And Lewis comes off as a spoiled brat, not sympathetic at all. Couldn’t keep Trump’s name out of it either eh Ava?

Tom B
Reply to  Ricardo

Ava, you are part of the problem too!
Growing up I thought the same thing about Kennedy, Johnson, Carter, Clintons and especially Obama, but we survived.

Gee! Another entitled race car driver. Imagine that. He didn’t win and the world as he knows it is collapsing around him. His 13.1 million followers hanging on his every word and picture can sympathize with him.