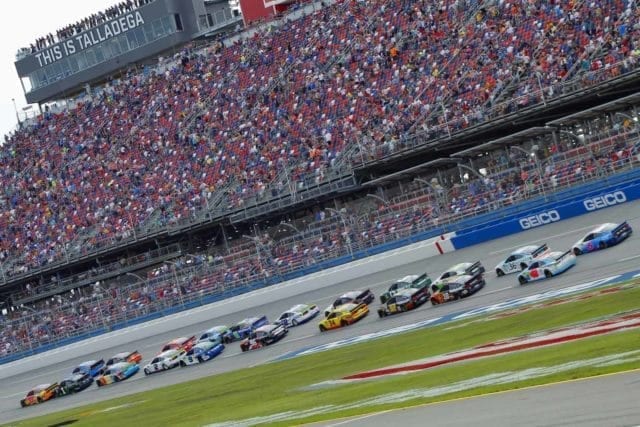 Kyle Larson was one of the first casualties of the carnage Monday (Oct. 14) at Talladega Superspeedway. Although his car stayed on the ground this time, Larson made heavy contact with an out-of-control Alex Bowman. Via his win at Dover International Speedway, Larson didn’t have to use a mulligan. Although he is in the next round of the Monster Energy NASCAR Cup Series playoffs, can Larson shed his longshot status and enter the final four?

Like Martin Truex Jr. at Richmond Raceway last month, Ryan Blaney pulled off another spin an win. Before Sunday’s rain delay and subsequent postponement, Blaney looped his Ford coming to pit road during green-flag pit stops but rallied back on Monday to complete the feat. Like Larson, Blaney’s Championship 4 hopes may be ambitious but is Blaney Team Penske’s best shot for a championship?

Before Brendan Gaughan got his pilot’s license, Joey Logano nearly got his. Logano nearly went over after contact with William Byron in stage three. Despite not flipping, Logano’s Ford was heavily damaged. However, Logano mustered up an impressive top-15 finish. Can the same grit carry over to next week’s contest at Kansas Speedway?

Clint Bowyer stayed out of trouble at Talladega… for the most part. Bowyer was on pace to collect valuable stage points and even had all four fenders intact on his Stewart-Haas Racing Ford at the end of the contest. The unfortunate part for Bowyer is he found himself in a high-centered for a costly two laps after losing a left-rear tire in turn 3 before safety personnel could come to his rescue. After his unfortunate break, can Bowyer shine at his home track this weekend?

The questions that remain are about as many MENCS drivers are relieved to get out of Alabama. After the dust settled after Talladega’s expected chaos, our Frontstretch panel of experts was tasked to determine the 12 best drivers in NASCAR currently. After much deliberation, here are Power Rankings: Talladega.

If there is one driver in the garage area who knows what is going on underneath the hood, it would be Hamlin. In fact, he has quite the history of failing to keep his hood secure on the car. While Logano may have been the driver to encounter hood problems at Talladega, many drivers, including Hamlin, were losing hood flaps left and right. Despite the loss of the hood flap, Hamlin survived the carnage, and with a battered Toyota, came home fifth.

Incredibly, Truex finished the Talladega race. His Toyota was about as mangled as anyone who tries to play the Alabama Crimson Tide. Somehow, the New Jerseyan limped the No. 19 car home to a 26th-place finish, albeit six laps down. Despite the perseverance, Truex has lost the number one spot in our Power Rankings.

Being from Jersey, @MartinTruex_Jr is really good at having someone fuel his car. pic.twitter.com/p86RWN8qb5

With manufacturer politicking readily apparent at Talladega among the Ford and Chevrolet camps, Toyota drivers found themselves without alliances or team orders. Because of that, Busch was stuck in the hornet’s nest on an island throughout the event. However, Busch found his way to the front, with the help of his former team and teammate Jimmie Johnson. Remember when Johnson and Busch were teammates? So much has changed.

Despite clobbering Bowman, Larson is apparently a huge fan of the new 2020 Chevrolet Corvette. Well, Larson’s fandom might be justified. With a 6.2 liter V8, nearly 500hp, and a base price of under $60,000, the new Corvette might be the real deal for American sports car enthusiasts. Just don’t tell that to Blaney.

The wreck that got the best of @KyleLarsonRacin. ?

While Harvick Beer may be a thing of the past, Harvick couldn’t find the peace and quiet of the serene scenes of the Busch commercials at Talladega. In fact, the Busch car was crushed like a BUSCHHHHHH can in a wreck caused by a Busch, who got turned by another Busch. Confused yet?

The Monday race day could be easily forgettable for Keselowski. Before getting taken out in a crash, Keselowski struggled to even get his car started after the rain postponement. Despite the treacherous day, Keselowski executed two excellent displays of tandem drafting. One came with the aid of Bowyer’s high downforce Ford Mustang and the other came with a volunteer’s powerful but heavy Freightliner 4800.

Cause for concern for Brad Keselowski and Team Penske?

Keselowski's car has yet to fire back up. #NASCARPlayoffs on NBCSN. pic.twitter.com/pIBwq7IoTX

As stated before, Hamlin surprisingly didn’t have major hood problems this time. That honor belonged to Joey Logano, and unfortunately for the 29-year-old, a missing hood isn’t legal or very aerodynamic for that matter.

Also, someone might want to pursue a Lenscrafters sponsorship for the No. 22.

Bespectacled @joeylogano looks cool and all but if this marks the end of his squinting then we need to confiscate those because that can never end. #NASCAR pic.twitter.com/HZ5nfz4ZXA

The top speed of the 2020 Chevrolet Corvette is approximately  194mph, which would fit very comfortably in the pack at Daytona or Talladega. The new Corvette also has 470lb -ft of torque, which is again, very impressive for a modern American sportscar.

Great run for the Pole today by our naparacingteam here at Talladega. We need all the good vibes we can get to make it happen tomorrow, so I thought I’d share a cool photo of one of my hero’s holding up the right… https://t.co/rgMZHHd9tv

THE BIG ONE at @TalladegaSuperS!

Is Willy B even old enough to drive a Corvette?

Anyways, enough of the Corvette hijinx. Byron lead at Talladega for an impressive 23 hours. Unfortunately, this was not the Rolex 24 Hours at Daytona as Byron was not able to keep the lead in the final hours and was taken out when a bump draft went awry.

?? see you all again tomorrow https://t.co/bymH4ObiC1

Plus, the Chiefs lose, a Ferrari and shaking at 200 mph.

The end of “Ferris Bueller’s Day Off” when they’re trying to erase mileage off the Ferrari pic.twitter.com/s4r5mi8BPH