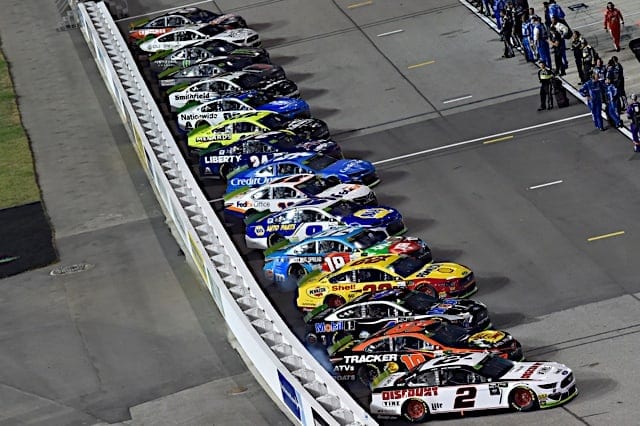 In a throwback to the 1985 Indianapolis 500, Martin Truex Jr. did his best impression of Danny Sullivan’s “spin and win” as the New Jersian took the top step of the podium at Richmond Raceway for his second consecutive victory. Can Truex make it three-for-three in the first round of the playoffs this weekend at the Charlotte ROVAL?

Ryan Newman came out of nowhere to score a much-needed top five at Richmond. With this surprising display of competitiveness and a 14 -point cushion in front of the Round of 16 elimination cutline, can the Purdue Boilermaker feel comfortable about advancing to the next round despite the anticipated chaos of the ROVAL?

Ryan Blaney left his worst statistical track with his best statistical finish. Unfortunately, that finish was 17th. Although he is the defending winner at the ROVAL, with recent results like the one at Richmond, is Blaney slipping out of contention?

After crashing out of Las Vegas, Erik Jones managed to right the ship at Richmond … that was before he was disqualified. With a near-insurmountable gap to the playoff cutline, Jones will likely have to win in Charlotte, which according to Jeff Burton, is the hardest race track in America. Can he pull off the stunner, or is this a lost cause for “that Jones boy”?

Questions are multiplying as 40 Monster Energy NASCAR Cup Series stars prepare to tackle the series’ newest racetrack: the ROVAL. With just one race under its belt, this year’s event at the ROVAL is anticipated to be just as wild, pressure-packed, and carnage-filled as last year’s inaugural race? With storylines mounting, our Frontstretch gurus were challenged in determining the top 12 competitors currently in the MENCS.

Despite struggling with forward bite issues, celebration and elation were seen written all of the faces of Joe Gibbs Racing’s No. 19 crew as Truex crossed the finish line first for the second consecutive weeks. The celebration was capped off by Truex’s two victory burnouts (credit Ricky Stenhouse Jr.‘s embarrassment) despite Kyle Larson‘s claim that he should be flagged for premature celebration.

“Even an unscheduled trip through the spin cycle couldn’t stop him.” Rob Tiongson, The Podium Finish

Despite winning stage two, Busch could not find the keys that opened the gate to victory lane. We would assume that the Nevadan was preoccupied with late-model racing, but we could be wrong. Yet, Busch was able to walk away from Richmond with 54 points, including 19 stage points and another cushy playoff point. Well done.

The next drier out of the Joe Gibbs Racing stable is Hamlin. Ironically enough, Truex, Busch and Hamlin sit first, second and third in our power rankings this week, which directly emulates to their result at Richmond. However, Jones in the fourth JGR Toyota was disqualified. Yet, in another twist (*spoiler alert*), Jones is the last driver featured this week. Did someone say irony?

For the first time since Darlington, Richmond pole-sitter Keselowski managed to work his way up to the lead position, a title which he held for 89 laps. Like Busch and Hamlin, Keselowski has a considerable cushion over the cutoff line. However, the ROVAl awaits. The No. 2 driver hopes to not end up in the turn 1 tire barriers like last year.

Just another day at the office…

“He will get his share in the playoffs.” -Kelly

Although a 12th-place finish would be celebrated by many drivers in the MENCS garage area, Logano’s night was “not what we wanted at Richmond.” However, Logano later said we our “keeping our eyes on the prize and doing what we have to do to get to Homestead Miami Speedway.” Does this sound like 2018?

“You know Logano is dangerous when he has an extremely off race and he finishes just outside the top 10.” -Tiongson

While Larson seems to be distracted by Truex’s burnout, it might just be as applicable to celebrate the Chip Ganassi Racing No. 42 team. Remember when the No. 42 bunch couldn’t finish a race earlier this year? They have certainly turned that around. With a comfortable sixth at Richmond and memories of the late-race heroics out of their driver at last year’s ROVAL race, the CGR group should feel pretty comfortable this weekend.

Excited to get back to @RichmondRaceway in the @CreditOneBank Chevy. Looking forward to a good weekend here. Come check out the playoff action in person tomorrow night.
??? https://t.co/sLwPnEXW4S

“Currently reading “How to Succeed in the Playoffs” by Ryan Newman.” -Greene

Despite scoring stage points in both stages, the son of Awesome Bill from Dawsonville slipped back to 13th on the finishing grid, the first driver one lap down. With Elliott’s lackluster playoffs so far, can anything be done to light a spark underneath the No. 9 team?

“NASCAR’s version of Wakko from the Animaniacs needs a pick me up in these next few races.” -Tiongson

You know you’ve made it when you have a corn maze of your car.

This guy will point race you to death. Bring it on.

Take the whole family to @RescueRanchNC this weekend for Fall Family Fun Days. Huge shout out to Mazola Corn Oil for sponsoring the corn maze sporting the @Roush6Team Ford Mustang.

“So I’m not sure who invited Newman into the top 10. I wonder if he’ll follow his 2014 guidebook.” -Trey Normile, Gator Games

After a way-too-long absence, the much-awaited return of Bowyer’s social media chronicles is BACK!!!

So, without further ado, on this week’s edition of Clint Bowyer’s social media chronicles: mamas and Lincoln Navigators, the picturesque beauty of bales of hay, and an intoxicated interview in camping lot J.

Headed home from Rich. Solid night for us. Going to be exciting next week at the Roval. Can’t wait to get home and root on the @Chiefs. ?

“This may be just wishful thinking.” -Kelly

Apparently Blaney is a home improvement expert who takes showers in his firesuit. Okay.

Apparently, tech is harder to pass than Ryan Newman.