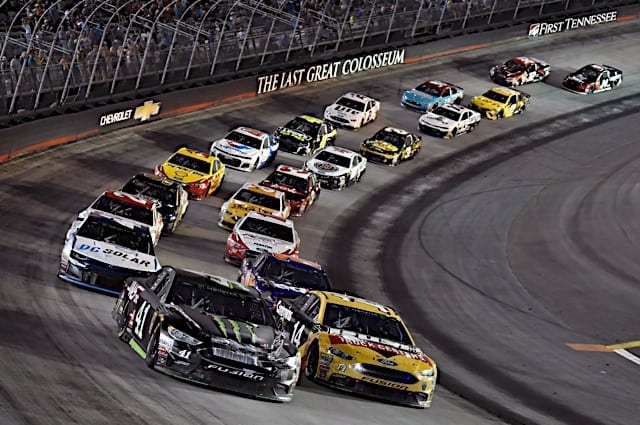 Who will end Saturday night on top of the roof in victory lane?

The Busch brothers have won the last four Monster Energy NASCAR Cup Series races at Bristol Motor Speedway. Kurt Busch will be going for his sixth win at the half-mile oval, while Kyle Busch is looking for his ninth, which would tie him with legends Dale Earnhardt Sr., Cale Yarborough and Rusty Wallace for second-most of all time. Darrell Waltrip has the most, with 11 all-time and seven straight at one point in the early ’80s.

In the spring race this year, Kevin Harvick had the best car on track throughout the weekend. But multiple post-qualifying inspection failures doomed Harvick to being four laps down after having to serve a drive-through penalty at the start of the race.

Although the spring race came down to a duel between the Busch brothers, Team Penske largely dominated the day. Joey Logano finished third and Ryan Blaney finished fourth, with the two combining to lead over 300 laps, while Penske affiliate Wood Brothers Racing had its best finish of the year so far with a sixth.

This is Ricky Stenhouse Jr.’s last solid chance of winning to get into the playoffs this year. Bristol has been easily Stenhouse’s best non-super speedway track, having finished second twice to go with a pair of fourths. If there’s anybody who could get a surprise win these last few regular season races, barring a rainout, Stenhouse at Bristol is probably the best bet once could make.

Ryan Newman has been the king of consistency this season. A month ago, he easily led the entire Cup field when I invented/calculated the Pearson Grade, meaning that he’s been finishing significantly higher than where he’s actually been running during the duration of a race. Case in point: Newman’s ARP at Michigan International Speedway last week was 20th, but he ended in 12th at the finish.

Those solid points runs have allowed him to move up from a tie with Jimmie Johnson for the final playoff spot to being 16 points above the current cut line. With Johnson and Clint Bowyer both struggling at Michigan, they have allowed Daniel Suarez to enter the playoff race seemingly from out of nowhere. Suarez’s fifth place at Michigan brought him up to just six points away from the current line, occupied by teammate Bowyer.

Obviously, everything changes with a new driver outside of the top 20 winning, but for now, that looks like it these four drivers will be competing for these final two playoff spots. Erik Jones or Kyle Larson might join the four if they have two bad races out of the next three, but their 54- and 55-point leads, respectively, on Newman are almost insurmountable.

Can we talk about Noah Gragson for a second?

Noah Gragson might very well be one of the best raw talents coming up in NASCAR today. The Las Vegas native has all the tools to be able to make that leap to the Cup Series at some point in the upcoming seasons.

But if there’s one thing that has been obvious watching him the past few years, it’s that the guy has no common sense. He threw away a number of Gander Outdoors Truck Series wins last year and arguably a couple of Xfinity Series wins this year, having the best car/truck in the field being a bit wasted by dumb moves and questionable decision making under stress.

But stuff like this is what scares me about him:

hey @NoahGragson please explain to me why you think it’s appropriate to film random woman, zoom in on them like that and CAT CALL them then proceed to POST HER ON YOUR SNAPCHAT pic.twitter.com/DuK1rMvq0u

Yes, that is supposedly Dale Earnhardt Jr.‘s driver in a street in Ohio prior to the race at Mid-Ohio Sports Car Course race catcalling a seemingly unknowing woman and zooming in on her buttocks on a public social media account.

In one instance, a post such as this would still be disgusting, but it could be chalked up to a kid doing something really, really dumb on Snapchat. But this post is not the only creepy thing Gragson has done. How did he celebrate the Snowball Derby win last year? Oh, yeah, that’s right, trying to kiss an unsuspecting and initially non-consenting trophy girl — which, even though the story ended with the two going on a couple of dates, was still a bad look. Or how about last year, where he graduated from high school at Texas Motor Speedway and celebrated by kissing women without even so much as asking them first?

If Gragson wants to make it as a professional athlete, he needs to learn that kids are looking up to you. Doing stuff like this is not helping matters in that department, to say the least. I’m not saying that you can’t have fun on social media; you don’t see Bubba Wallace or Ryan Blaney doing disgusting things like this.

And in the unique sport of NASCAR, when talent can only get you so far and it’s up to corporate sponsorship to get you the rest of the way, is a sponsor really going to look at this and go, “Hey, let’s invest $15 million per year in this guy and have him be the face of our brand”? Especially in the me-too era, where stuff like this will eventually come back and bite everybody in the ass.

Now, should Gragson’s career be over? No. We all regret things that we post, said and did when we were younger. As long as it isn’t a major crime, there should be redemption for anybody in this situation. A sit-down with a social media manager and trying a different attitude when it comes to things like this would go a much longer way toward preventing situations such as this, and maybe even turning a negative into more of a positive for everybody involved.

What does this say about NASCAR’s current image?

What’s more, however, is that crap like this is only contributing to NASCAR’s growing image in the sports world as a privileged white frat man’s club.

This is a place where Barstool Sports is celebrated and paid for coming out, not stopped at the gate. This is where the NRA proudly sponsors a major event and absolutely nobody bats an eye toward it. This is a sport where team owners have outright threatened to put people out on buses if they dare to use their freedom of expression to quietly protest racial injustices in law enforcement.

Jalopnik published an article that goes more in depth on this subject this week, and just about every point made is valid. And you really don’t think any sponsors or perspective sponsors have seen this bed the sport has made for itself and have decided to pass on supporting it?

In an ideal NASCAR, everybody from all walks of life would feel welcome when they are at a track. Political organizations/PACs from either side of the aisle would be banned from both race and team sponsorships, the confederate flags would come down because that is a political statement at the end of the day no matter how it’s sliced, and maybe an organization whose public face once said this should not be paid to show up.

And it’s frustrating, because I know this community of race fans can be great when they get to know you. Remember when NBC tried to “get” NASCAR by sending “Muslim-looking men” (2006 was a long time ago) to Martinsville Speedway and nobody bothered them about their race/religion? If the sport as a whole became more open and welcoming, maybe that stigma begins to go away, and opportunities to grow a more diverse fanbase -0 the one NASCAR has chased for so many years to begin with through Drive 4 Diversity — begin to pop up.

But first, it’s going to take some time to scrub off those Barstool stains made this year.

How many people CARE what the ‘playoff’ picture looks like? how many fans feel the season ends just before it starts?

Michael “NASCAR isn’t progressive enough!!!” Finley. No one gives a shit dude. It’s ok to like Barstool, it’s okay to support the NRA, it’s OK to not want people kneeling during the national anthem. Go cover something else.

Jesus this whole article reads like the social media screeds of some #MeToo chick. Noah kissing the trophy girl isn’t a scandal. He’s young, he’ll grow up, just needs to learn to not post on social media.

And buddy, if you hate NASCAR’s fan base so much, why are you here? Why do you have a problem with white Southern men liking a sport? Is there something inherently wrong with a fan base being mostly conservative?

Michael, NASCAR was founded by a gang of moonlighting moonshiners. The sport’s roots are in deep in soil of the rural, “Jim Crow” South. Thus their many relationships with controversial sponsors is easily understood.

A tobacco company, fresh from being banned from TV advertising, stepped in to save NASCAR after the auto manufacturers pulled back their factory teams in the early-1970’s; chewing tobbacco sponsors soon followed. Beer sponsors have been staples in NASCAR since the late-70’s, but when beer companies began to pull back in the late-00’s, NASCAR welcomed hard liquor and spiked drink sponsors with open arms. Then when times got really tough in the late-2000’s NASCAR embraced sketchy sponsors like a fake penis-enhancement pill, dangerous diet pills, energy drinks/potions with mysterious ingredients and a multi-level marketing company that is has been in state attorneys generals’ active case files. The beat goes on today when NASCAR recently allowed a solar power company, which turned out to be a Ponzi Scheme, to sponsor a major team, as well as sponsoring some of their tracks and events. Then there is the on-going financial alchemy by a certain dog-training operation sponsoring one of the biggest teams in the sport. Therefore, sponsorship from a gun industry lobbying group is actually in keeping with NASCAR’s standards.