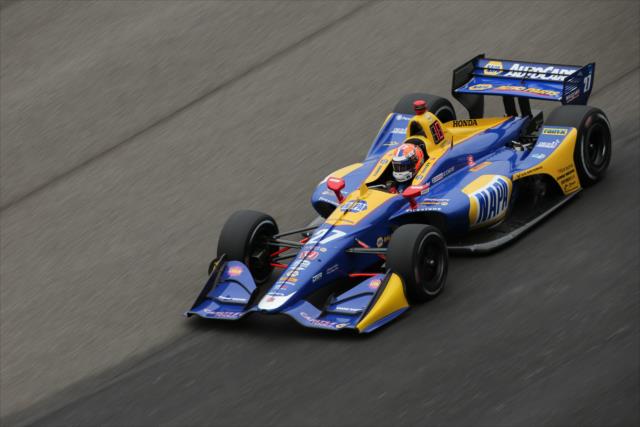 Alexander Rossi’s second Indianapolis 500 victory was within reach. Rossi and eventual race winner Simon Pagenaud battled during the final 13 laps of the race. After a big crash that resulted in the red flag being thrown, Rossi had just taken the lead away from Pagenaud and had time to sit and think about the final sprint to the finish. That final shootout built up to be one of the most intense in recent memory at Indianapolis.

Rossi battled so much adversity during the race just to get to that point, including other drivers.

ROSSI PASSED SERVIA WHILE HE WAS ANGRILY GESTURING AT HIM HAHAHAHA pic.twitter.com/nfrUSZNNlo

Rossi noted that the respect from lapped traffic just wasn’t there with NBC after the race, especially with Oriol Servia, who was a couple of laps down.

Rossi is told Helio was blocking on behalf of Pagenaud.

They all agree that they need to talk to IndyCar about this.

Rossi had an uphill climb all day long, including fueling issues under one stop. He was clearly frustrated as the race could have slipped away in a heartbeat, but he wouldn’t let that be his legacy in the 103rd Indianapolis 500.

Rossi raced like an angry madman, not letting the win slip away that fast. After racing through nearly the entire field, the lapped traffic was taken out of the picture in the end, setting up a mano-a-mano battle for the victory. A hungry Pagenaud, who had never won in the biggest race in IndyCar, vs. Rossi, who faced legitimacy issues after his win in the 100th Indianapolis 500, made for an instant classic.