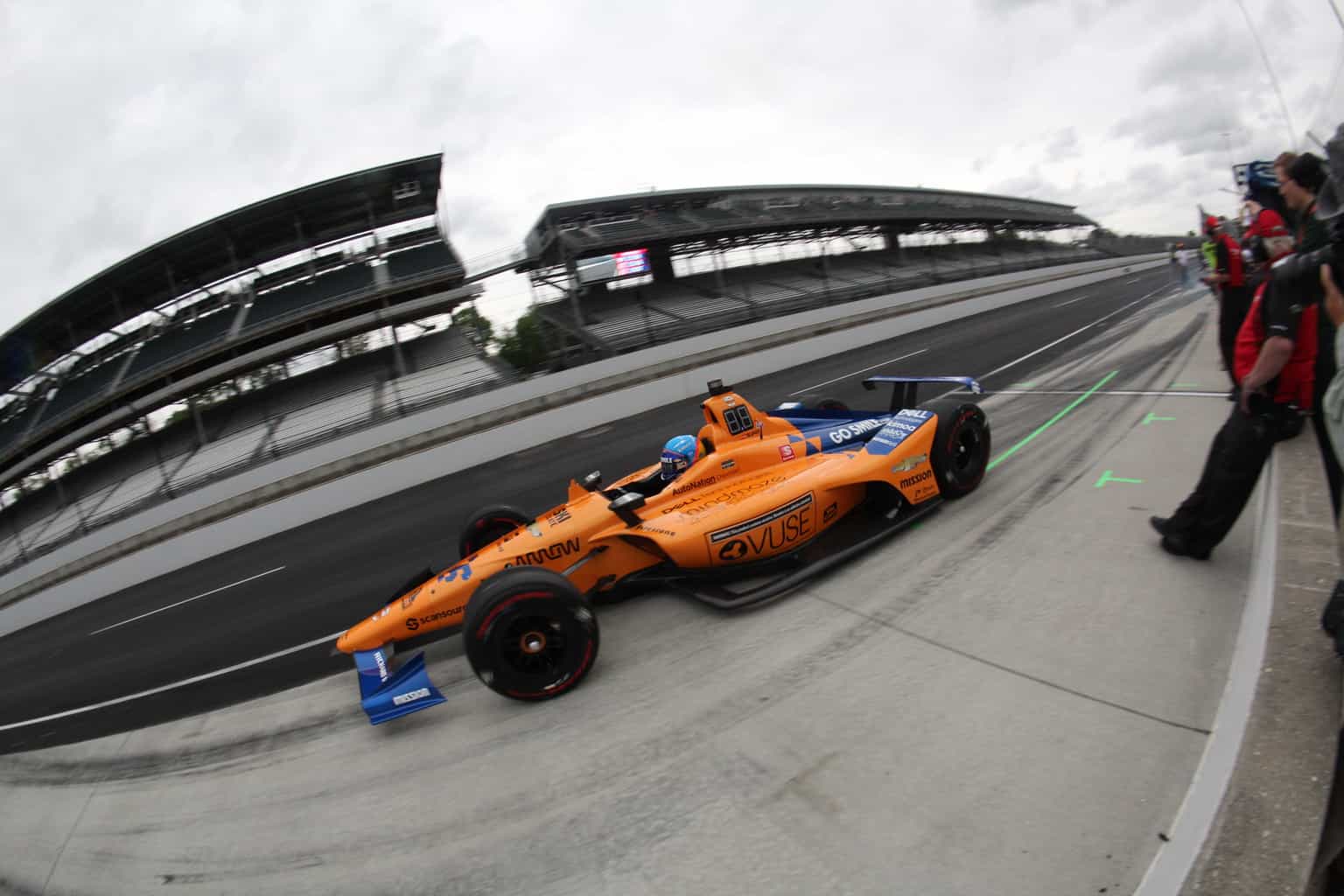 Saturday was a day full of emotion, passion and hard racing. From the beginning stage of the Monster Energy Open to the fireworks and celebration after the Monster Energy All-Star Race, nothing excelled over the prestigious event. Nothing, except for Kyle Larson.

The Open began with a close battle to finish out the first stage, as William Byron snagged the first entry into the All-Star Race. Byron just edged out Bubba Wallace, who looked to have the stage won until the final turn. Wallace’s hard racing would not be for naught, as he charged his way in on stage two. His emotional interview showed just how much this stage win meant for him and his team. It wasn’t just any ordinary stage win, though; it was a ticket to race for $1 million. Larson would set sail in the final stage and never look back, and Alex Bowman was announced as the fan vote winner.

The All-Star Race definitely didn’t disappoint as the feature event. Kevin Harvick’s pink “Millennial” car sped to the front for much of the race, leading 33 laps. However, slower times on pit road proved to be the difference between a million bucks and a participation trophy. Kyle Busch looked like the early favorite to overtake the freaky fast No. 4 car, but in the end, he finished just behind it.

Larson, with help from his pit crew, took home the huge sum of money. In the back of the field, polesitter Clint Bowyer and Ryan Newman displayed their passionate frustration with each other. Bowyer then continued the battle on pit road, charging toward Newman’s car with his helmet still on and throwing punches. It seemed to overshadow the celebration, but it also showed how much drivers care about their position on the track.

Wallace was the most hard-fought driver of the day, finishing fifth in the All-Star Race. It was a major confidence boost for him and RPM, and hopefully, he can continue that momentum to the Coca-Cola 600. – Joy Tomlinson

Xfinity Series: Philadelphia Takeover gets an A+

For the fourth consecutive year, young stars of the Xfinity Series took over the streets of Philadelphia from May 14-15. It was excellent.

Justin Allgaier threw out the first pitch at the Philadelphia Phillies v. Milwaukee Brewers game. Unfortunately for the home team, they lost. As for Allgaier’s pitch, it was just a bit high, though, his goal was to keep it out of the dirt. A success indeed.

The real fun was on Wednesday when Allgaier and 16 other Xfinity drivers participated in autograph signings with fans, a parade around the city, with Tyler Reddick burning up a rear gear while doing a burnout. That was unfortunate, but thousands of fans, literally, flocked the streets of Philly, as NASCAR took over one of the biggest markets in the United States.

A quartet of drivers visited the Franklin Institute, made signature Philly cheese steaks at the famous Geno’s Steaks. Meanwhile, the other 13 drivers took a bus tour of the city, visiting the Rocky steps and other fun activities.

But you’ll have to wait for Thursday to get the in-depth experience, as it will run in this week’s Eyes on Xfinity. – Dustin Albino

Kyle Busch went five-for-five in the Truck Series this season with a win at Charlotte Motor Speedway Friday night. In true dominant fashion, the driver/owner led a race-high 102 of 134 laps en route to his 56th career victory. For those of you who can’t stand Busch racing in the series, rest assured that you won’t see him behind the wheel of a truck for the remainder of the 2019 season.

Meanwhile, it was Brennan Poole who stole the show. Just a week removed from skipping the race at Kansas Speedway due to a lack of sponsorship, the driver of the No. 30 On Point Motorsports Toyota showed up with a sponsor in Mad Vapes and challenged Busch for the lead with just three laps remaining. Without enough speed to really put up a major threat for the win, Poole rode around to a career-best second-place finish, despite a broken sway bar that failed at the end of stage one.

“It was a freaking battle,” Poole said. “The frontend was really moving around a lot and the truck was unsettled and it really hurt me with lateral grip, so I was struggling when I got beside a truck so I had to run the top.

“The stuff that this team does, extremely underfunded is just ridiculous. To run second tonight with a broken sway bar, I don’t really have much other to say than that. Just incredible effort and we’re going to Texas in a couple of weeks, so I’m looking forward to going back and doing this again.”

For some, a runner-up finish, while exciting, isn’t more than being the first loser. But for a small, underfunded team like On Point Motorsports, it’s more than likely the opportunity to garner the financial backing the organization needs to complete its planned full-time season. – Beth Lunkenheimer

When McLaren Racing–a true powerhouse in the world of motorsports–announced that Fernando Alonso would be returning to the Indianapolis 500, it was hard to imagine a starting grid without the two-time Formula One world champion. But thanks to Kyle Kaiser and the scrappy Juncos Racing squad, the Spaniard will have to wait at least another year to make his run at the Triple Crown of Motorsports.

One of the smallest teams in the NTT IndyCar Series paddock, Juncos Racing put their car in the show after enduring a tough start to the month. The team, based in Speedway, showed up to the track with a white, sponsorless car, which Kaiser promptly put in the wall. Using their backup car–a chassis built for road courses–Kaiser put together a four-lap average of 227.372 mph, quick enough to beat Alonso and his McLaren Chevy, putting a premature end to his month of May.

What is yet to be seen, however, is whether or not McLaren would try to buy their way into the field. But with only a handful of one-off Chevys in the field, finding a seller might be too tall a task.

At the front of the grid, Simon Pagenaud continued to rebound from his poor start to the season, claiming his first Indy 500 pole position in the Fast Nine Shootout. Ed Carpenter and Spencer Pigot will join the Frenchman on the front row for the 103rd running of the Greatest Spectacle of Racing, all of whom will be fighting for their first 500 win. – AJ Hecht

Sunday’s race at Toledo was just another example of how devoted Toyota is to the minor leagues of NASCAR. Despite not picking up the win Saturday night in Charlotte, Toyota earned the victory in Friday night’s Truck Series race and Sunday in the ARCA contest at Toledo. Toyota outright dominated taking the first four positions with Venturini Motorsports and Joe Gibbs Racing.

Toyota has outright kicked some tail so far this season, winning every single race on the ARCA Menards Series schedule. If Venturini Motorsports has anything to do with it, it’s not ending anytime soon. Christian Eckes is still 95 points out of the points lead, but the Nashville victory and a third-place finish in Sunday’s race at Toledo show he isn’t going down without a fight.

Neither will Michael Self, who was involved in an accident two weeks ago in Nashville, and finished fourth on Sunday in Toledo. These two drivers are pushing it to battle it out for the championship as we inch closer and closer to the mid-point of the season.

With his victory Sunday, Chandler Smith is also keeping Toyota in the picture for both the manufacturers and owner championship. The ARCA Menards Series is showing proof that Toyota is well devoted to the future of the sport and in a time where things are so sketchy, it’s great to see the support. – Christian Koelle

The Blancpain GT World Challenge America field this past weekend at Canadian Tire Motorsports Park was quite thin, to be honest.  After the season started with 23 entries at Circuit of the Americas in March, a mere 13 teams entered last weekend’s action.

One of those teams that chose not to make the trip this past weekend was One11 Competition with their two Ferrari 488 GT3s.  Despite not making the trip, they found a way to make their own news.

On Sunday, the team announced that it has signed Andy Lally, who has worked with the team in varying capacities over the years, to drive its No. 19 Ferrari alongside Chris Cagnazzi in the next round at Sonoma Raceway (June 8-9).  With the addition of Lally in place of Brian Kaminskey, the team will move from the Am class to the Pro-Am class.

Lally racing at Sonoma for One11 Competition will not conflict with his IMSA duties.  The IMSA WeatherTech SportsCar Championship races the previous weekend at Belle Isle Park in Detroit in the sole round of the calendar for GT Daytona teams that only counts towards the WeatherTech Sprint Cup.  After Detroit, IMSA is off until Watkins Glen at the end of the month. – Phil Allaway