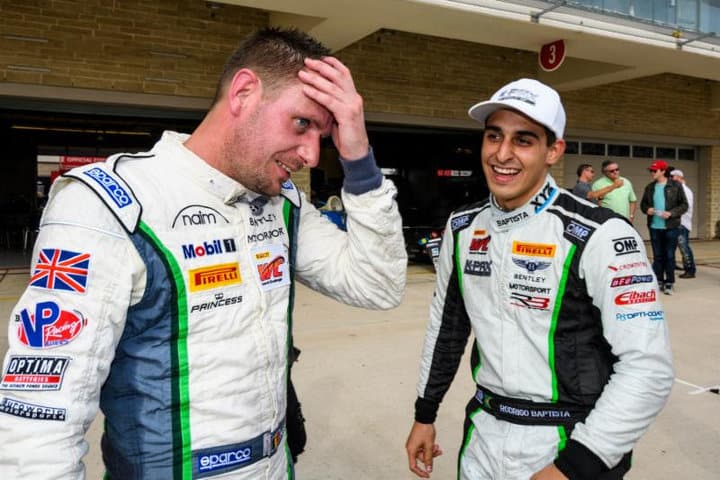 K-PAX Racing was dominant in the Blancpain GT World Challenge America season opener Saturday (March 2) at Circuit of the Americas in Texas. The No. 9 Bentley of Andy Soucek led from the pole, but a slower pit stop allowed the No. 3 Bentley of Rodrigo Baptista and Maxime Soulet to jump the No. 9 and go into the lead at halfway.  From there, Soulet was able to hold off a charge from Àlvaro Parente to take the overall victory.

“I knew [that the battle was ] going to be like that since [Parente] went out one lap earlier and his tires were already hot,” Soulet said after the race.  “I didn’t know that I was in front [at first], then I saw the big Bentley lights [in my mirror] and I said whoa, whoa , whoa!.  I had to keep him behind, then manage the pace at the end.”

Soucek started from the pole and opened up a small gap on the field.  That gap was short-lived as DXDT Racing’s David Askew spun on Lap 4 and went hard into the TecPro barrier in the Esses.  The crash resulted in a red flag to repair the barrier.  Askew was ok after the crash.  His Mercedes was quite a bit worse for the wear.

Well not the Race 1 we hoped for. My teammate was having a great opening stint. Gained spots on the opening lap until a big crash. Good thing @MercedesAMG build a really strong car, and David is ok. Bad news is we are done for this weekend as the car is damaged beyond repair. pic.twitter.com/Rx1ULFJEAy

After the red flag, Soucek and Baptista opened up a big lead on the rest of the field while the Alegra Motorsports Porsches of Marco Holzer and Daniel Morad fought with R. Ferri Motorsport’s Miguel Molina for third.

40 minutes into the 90 minute race, the pit window opened.  Soucek decided to stay out until the halfway point before pitting to give way to Parente and take four fresh tires.  Baptista stayed out and ran one more lap as fast as he could before bringing his Bentley into the pits.  The K-PAX Racing crew delivered a slightly quicker pit stop.  The quicker stop and a fast in-lap allowed the No. 3 with Soulet now at the wheel to jump Parente’s No. 9.

Molina and the Alegra Porsche all stayed out as long as possible before making their mandatory stops.  They were still stationary in their stalls when the Bentleys came charging past.

After the stops, the K-PAX Racing Bentleys settled into a fast pace that allowed them to put the better part of a second a lap on the pack each lap.  Parente used his warmer rubber to run up to the rear of Soulet and got alongside at one point.  Soulet was able to hold off Parente’s charge until his tires got up to temperature.  Once that happened, it was all she wrote as Soulet pulled away for the win.

Baptista and Soulet’s margin of victory was 4.587 seconds over Parente and Soucek.  Wright Motorsports’ Patrick Long and Scott Hargrove finished third in their Porsche, but they were 37.6 seconds behind.  R. Ferri Motorsport’s Molina and Toni Vilander were fourth, while the No. 22 Porsche of Alegra Motorsports’ Morad and Michael de Quesada ended up two laps down after suffering from a mechanical failure in the last couple of laps of the race.

In the Pro-Am class, P1 Motorsports’ JC Perez won the pole in his Mercedes, but TR3 Racing’s Wei Lu was quick from the drop of the green flag.  Lu was able to take the class lead away from Perez early, then was able to keep up with Molina, Morad and Holzer after the red flag.  That gave the team a big advantage heading into the pit stops.

Once Jeff Segal got into the No. 31 Ferrari, he was able to expand the team’s lead while keeping the car out of trouble.  By the end of the 90-minute race, Segal had put the Ferrari up to fifth overall, good enough to claim the Pro-Am win.

Lu and Segal’s margin of victory was 8.511 seconds over Wright Motorsports’ No. 91 Porsche for Anthony Imperato and Dennis Olsen.  Racers Edge Motorsports’ Martin Barkey and Kyle Marcelli were third with their Acura NSX GT3 Evo.  Perez and Maximilian Buhk were fourth, while the Gradient Racing Acura of Till Bechtolsheimer and Ryan Eversley were fifth.

In the Am class, Alan Metni won the class pole in his Porsche 911 GT3 R, but dropped back early.  A spin completely took him out of contention.  Ultimately, it was the Squadra Corse Garage Italia Ferrari of Caesar Bacarella and Martin Fuentes that came to the front.  Bacarella was more than able to hold his own early in the race.  Once Fuentes got in the car, it was all over.  Fuentes was able to pull away with ease to claim the class victory.

Fuentes and Bacarella ended up one lap down to the overall leaders in 11th.  Their margin of victory in class was 87.443 seconds over Risi Competizione’s Anthony Lazzaro and Pierre Mulacek.  One11 Competition’s Chris Cagnazzi and Brian Kaminskey were third in their Ferrari.

Race No. 2 is scheduled to go green at 3:15 p.m. EST Sunday afternoon.  In a somewhat dicey qualifying session earlier on Saturday in changaable conditions, Marcelli put the Racers Edge Acura on the overall pole.  The race should be streamed at World-Challenge.com.  Barring that, the race will air on CBS Sports Network via tape delay at 10:30 p.m. Sunday night.