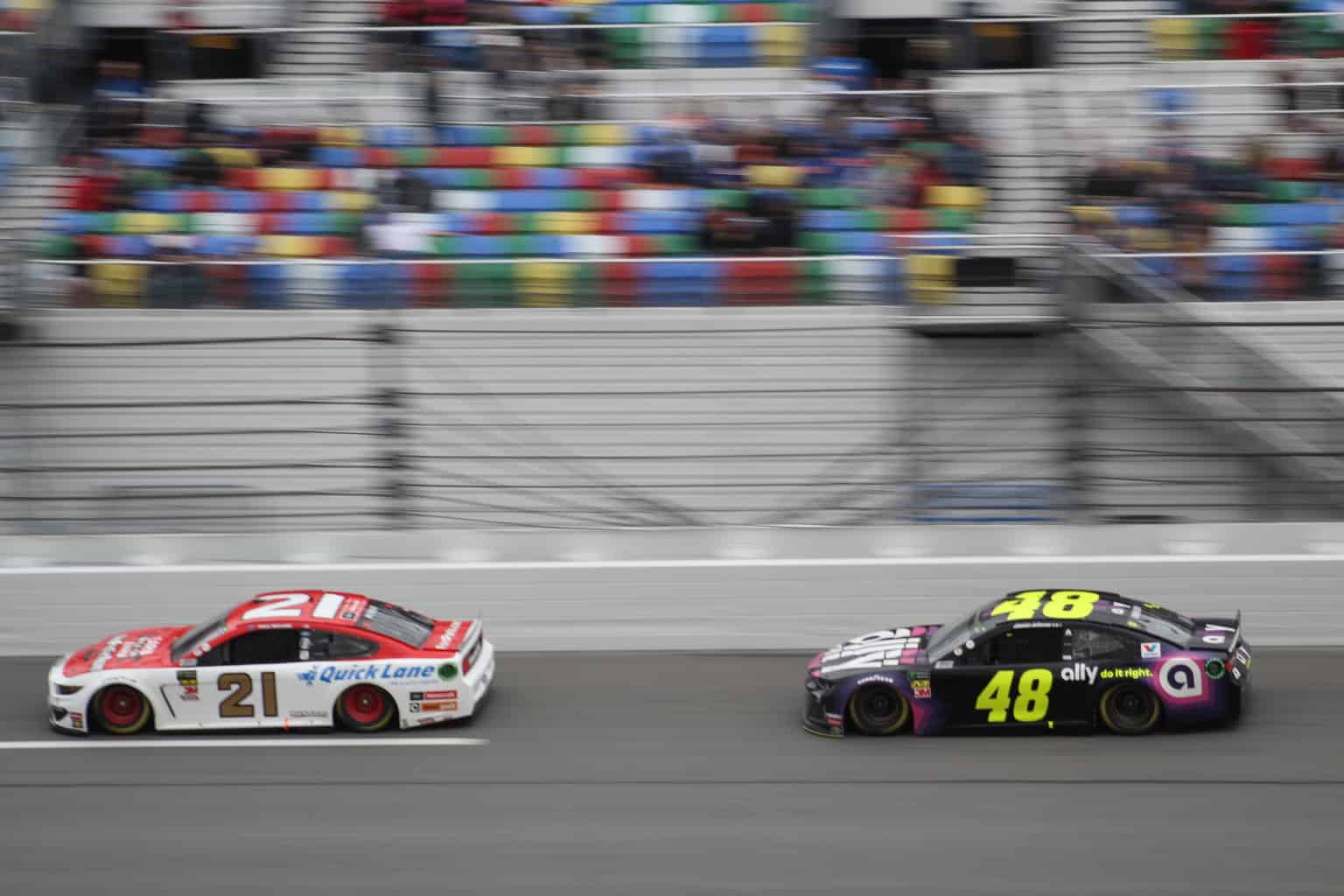 Starting from the pole position, Paul Menard was feeling bright despite the gray, foggy conditions that tormented Daytona International Speedway Sunday afternoon. The first Monster Energy NASCAR Cup race of 2019 left him with an excellent opportunity to win his first race since 2011.

Making his fifth Advance Auto Parts Clash appearance, the Wood Brothers Racing driver started from pole position for the third time. He went on to dominate the 75-lap non-points event, leading 51 of the 59 laps completed.

With the majority of the day being run single-file behind Menard’s No. 21, the race seemed to be in his favor as both the checkered flag and incoming rain showers inched closer.

Unfortunately, for Menard, it was Jimmie Johnson‘s front bumper than inched a little too close. The No. 48 Chevrolet contacted Menard’s left-rear corner for the lead on the backstretch, triggering a 15-car crash that took Menard head-on into the outside wall. Heavy rainfall officially shortened the race minutes later.

Despite leading the most laps in the history of the 41-year Clash, Menard had nothing but a junked car to take from the day.

“That’s something for the history books, I guess,” Menard said of the record. “Unfortunately, we just got turned there.”

“I didn’t really know what happened until I saw a replay,” he said. “I felt like it was aggressive side-drafting. Got turned to the inside, hooked to the right and all hell broke loose.”

Menard knew the battle was on his hands entering the final 15 laps.

“It was a pretty tame race up until that point,” he said. “We knew that last restart was basically a new race – a little dash for cash to the end.

“It was definitely expected. I’m surprised we actually got single-file up top again after that last restart, but I knew something like that was going to happen. It was just a matter of time.”

Boring. Good thing I could multitask.

they kept saying that with more cars on the track for the 500 hopefully the second line will get help. interestingly enough i still managed a nap during the clash. be interesting to see how the duels run on thursday.

i expect another follow the leader parade, unless team orders require a few passes to see who leads better,drafts better.

I didn’t have to multitask. I was watching Lindsay over and over again on snow.

7 time is desperate for #8 so No more Mr Niceguy from here on out. He sends the message “don’t race me hard or there will be a price to pay”. Hope the youngsters stand up to him. Pretty sure Kyle Busch and Harvick will.

On further reflection I think they should go back to the last completed lap and Menard gets the win.