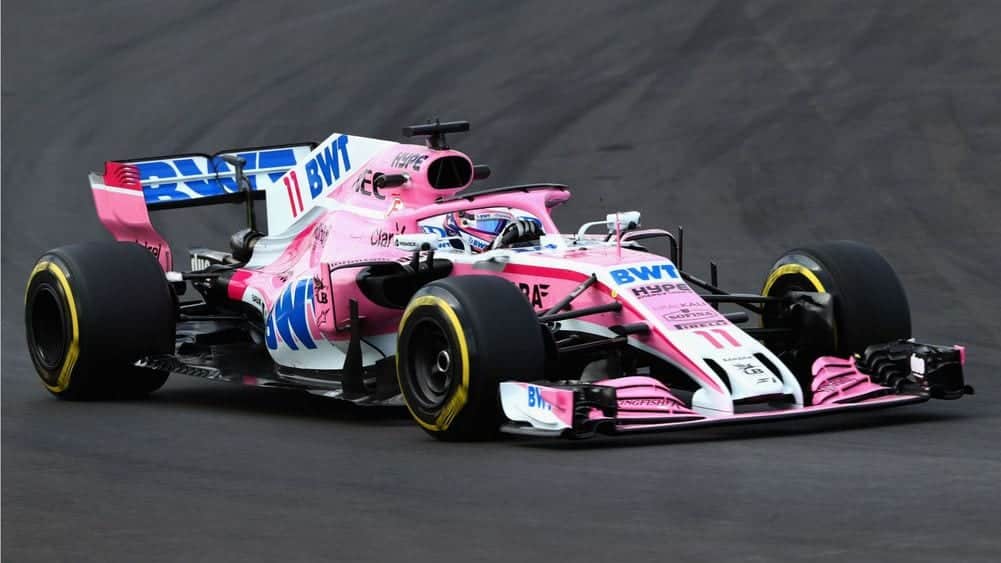 The 2018 Formula 1 season was one of up and downs for Force India. The team had high expectations as they were coming off of their best season to date in 2017 where they accumulated 187 points and finished best-of-the-rest fourth in the Constructors. They were returning their driver lineup of experienced point scorer, Sergio Perez, and a second full season of young Mercedes phenom, Esteban Ocon. It was hard to expect anything less than a couple of podiums here and there and a best-of-the-rest repeat in 2018. But the season got off to a rocky start.

They were unable to score points in two of the first three races with that one point being a 10th by Ocon in Bahrain. Perez got on the board for the first time in a big way in Baku with a podium finish, and Baku became the only circuit where Perez had been on the podium more than once. The third place was gifted to him after Valtteri Bottas in the Mercedes cut a tire while leading in the closing laps.

Despite the podium, it was a big surprise that Force India were not as consistent a point scorer as they were the year before. Ocon only had one points-paying finish in the first five races, and Perez just two. The team picked up the pace a bit starting at Monaco, when Ocon went on to rattle off five points finishes in the next six races including two sixth-place tallies. However, Perez only had two in that span of time – something was off.

The reason became clear early in the year when it was learned that Team Principal, Vijay Mallya, who had left the team after facing charges of fraud and money laundering in 2017 was ordered to pay dues to over 13 banks and many other organizations that he had defrauded. The team that was already known for making the best of a small budget was now dealing with close to nothing.

Perez signed an extension with Force India before the summer break but was also not being paid. As the summer break arrived, Perez sued the team into administration and the team looked for outside help to keep the cars on the grid moving forward.  Rumors flew around as Rich Energy offered to buy the team, but Force India was later acquired by a group that included billionaire Lawrence Stroll, father of Williams driver Lance Stroll.

The team was rebranded “Racing Point” Force India after Sahara was stripped because of its association with Mallya. A new controversy rose as many teams, including Renault, disputed the acquisition and Racing Point as a “constructor” as the purchase was of the team’s assets and not the entry into Formula One. The FIA made a ruling that starting in Belgium, the team would be stripped of all of their 2018 points and Racing Point Force India would be technically a new entry onto the F1 grid.

Force India was back in the swing of things with new funding and came back from the summer break in a big way.  Ocon and Perez qualified third and fourth respectively in Belgium, thanks to their Mercedes powered engine. The two finished fifth and sixth and were on the hunt to regain as many points as they could starting from zero halfway through the season, but had already jumped Williams in the standings and were right behind Toro Rosso. The team was back on their 2017 form with both cars finishing in the points in four of the next five races. Ocon’s eighth in the US Grand Prix was disallowed after failing a fuel regulation, but the new source of funding proved to be the answer to their woes.

The team could have ended the season better with only two points finishes, both my Perez in Brazil and Abu Dhabi. Ocon had that infamous run in as a lapped car with leader Max Verstappen in Brazil that forced him to retire. Force India was still able to finish the season with 52 points to climb over Williams, Torro Rosso, and Sauber to finish seventh in the constructors. If they had been allowed to keep all of their points from 2018, the team would have jumped past Haas to claim fifth.  What was a tough start to the season rose to a relative high note ending 2018.

The team’s pace following the summer break, Force India looked to be the best-of-the-rest all the way through Russia. They were fortunate to have the partnership with Mercedes that kept them as a top performing mid-field pack throughout the hybrid era, but still with a lack of funding they could really get the best bang for their buck in the aero and chassis department through the years and things are looking up with their new backing in the financial area of the team.

The on and off-the-track concerns entering the summer break. The team was lacking consistency despite that strong run from Ocon after Spain, but there were concerns that a team that finished fourth in the constructors in 2017 would not be on the grid when F1 returned in Belgium. Fans watching the saga were reminded of Lotus’ financial issues in 2013 and 2014 when Kimi Raikkonen was famously not paid before his departure to Ferrari, including his storming from the paddock at the end of the 2013 Abu Dhabi Grand Prix, slamming his car door as a frustrating way to end the stint with the team. With F1 being such a rich sport, there is no room for the financially flat.

The biggest change for Force India moving forward will be a complete rebranding of the team under the new management led my Otmar Szafnauer as Team Principal. They are currently listed as “Racing Point” for 2019, stripping Force India from the name for the first time since it was Spyker in 2007. Racing Point seems to be a placeholder as the team will probably announce a complete re-brand when they unveil their livery during the winter. One could expect a completely new car on the grid with new sponsors and potentially new color from their pink look for the past two seasons, but we will see.

Sergio Perez returns for his sixth season with the organization, his consistency, and experience, as well as sponsorship funding, made him a shoo-in to return to the team. Alongside will be Lance Stroll, as many predicted after the team was purchased by a group including his father Lawrence. This will be a big season for the younger Stroll as he comes off a terrible season with Williams in a car that no one, not even Lewis Hamilton, could have made look competitive. He was the better performing driver last season with two points-paying finishes. We’ve seen him perform well with his 2017 podium in Baku, but 2019 will be a “show me what you’ve got” season for the Stroll family.

With Stroll stepping in beside Perez, that means that Esteban Ocon will sadly not be back in the F1 in 2019. A rumored association with the other Mercedes team Williams did not come to fruition. Ocon will serve as Mercedes AMG Petronas reserve driver with hopes of returning to the grid in 2020.

Overall “Racing Point” Force India had a season that would put many grey hairs on the heads of their fans and members, though the many periods of uncertainty have been replaced with optimism. The 2019 season will be the beginning of a completely new era for a squad that will be made up completely of North American association. Will the new ownership bring enough funding to keep the team amongst the best-of-the-rest? Could they challenge Red Bull? Could there be a massive flop with a poorly developed car with new aero regulations? Winter-testing in Spain and the first race in Australia should let us know.